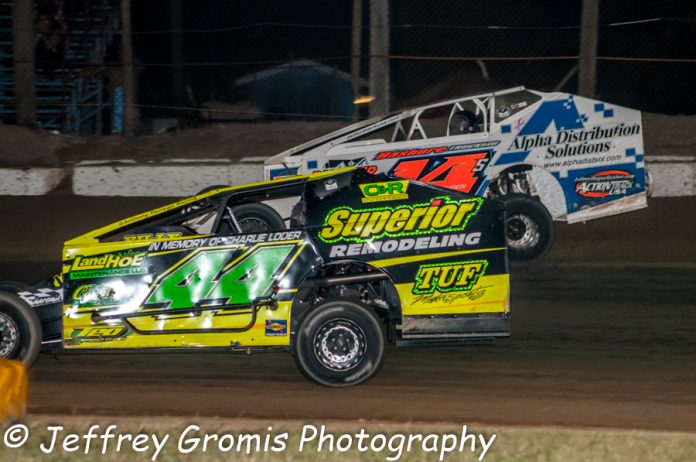 After taking the lead way back on lap two on a restart from Rick Laubach, it looked like Craig Von Dohren was on his way to his first ever STSS victory. Von Dohren seemed to have an easy time of it as he pulled away on each and every restart to a comfortable lead, but with the all of the talent that is assembled at each and every one of the STSS South region races you have to run a perfect race and not make any mistakes. Unfortunately for Von Dohren that wasn’t the case.

The complexion of the race changed on lap 28 when Von Dohren went into the third turn just like he had the previous 27 laps. However, this time Von Dohren missed his mark and went up and over the berm as a stunned Perrego watched from his second-place spot. Perrigo immediately took advantage of the Von Dohren miscue to shoot underneath the Dick Biever #14S and take the lead.

“I have to admit, I was grinning a little when he did that,” cited a happy Perrego standing next to his winning car at his hauler. “I did the same thing earlier in the race running behind Ryan Godown when I hung the right front tire over the bank and when I came back on the track I was still fifth. After that I think I just got a little more patient going into turn three so as not to do it again.”

Being the savvy veteran driver that he is, Von Dohren quickly gathered it back in and started to mount a charge looking to take the lead back from Perrego. Each and every lap Von Dohren inched ever closer to Perrego and with the two to go flags waving from starter Warren Alston CVD was right on the bumper of the No. 44 TEO car of Perrego.

Von Dohren made a last lap effort going into turn three as he drove in hard and underneath Perrego looking to put a slide job on the young driver. Perrego never wavered and let Von Dohren slide in front of him knowing that Von Dohren would not be able to gather it in before his car slid up the track. Perrego calmly made a left turn and powered back under Von Dohren to take the hard-fought win.

“I knew once we had the lead that I had to keep it straight, the tires were starting to go and it was making me a little free,” mentioned Perrego. “I was really good coming out of turn two all night, so I knew I had to use that to my advantage. On the last lap there, (Jeff) Strunk slowed my momentum there just a little bit coming down the backstretch and I knew that is where Craig was going to make his move. He went it there really hard and I knew he wasn’t going to be able to hold it down enough, so I just turned left and got a good bite coming off the corner to get back by him.”

For Perrego and the Brian Smith owned Superior Remodeling #44 team it has been quite the season. The win last night was Perrego’s third career win at Georgetown and the team’s 12th overall win of the season. Perrego talked about their year and the people that make that happen.

“We had a great race car tonight but honestly these cars have been fast all year long. Matt Hearn has really put a lot of time and effort into these cars each and every week to make sure we have what we need to get the job done. My crew does so much behind the scenes to make it all work and I can’t thank Brian Smith enough for the opportunity he has given me. The Billy the Kid motors are always strong and right now we are on quite a roll. I hope we can keep it going.”

Von Dohren very rarely makes a mistake on the track but last night was one of those rare nights. As explained earlier Von Dohren gave the lead away when he went over the banking in turn three and even though he rallied back to challenge for the lead. The Oley, Pa., driver was in a solemn mood after the race knowing what just transpired.

“The driver messed up,” said a dejected Von Dohren. “I gave it away and you can’t afford to give away, driver error.”

If you asked anyone what you would consider to be Ryan Watt’s home track, 99 out of 100 people would say Bridgeport Speedway and technically they would be correct, but if you heard the crowd cheer last night as Watt charged back through the field to a fifth-place finish you might have grounds to argue that point.

Watt has made comebacks before and most likely will do so again but the nature of last night’s comeback is one that will always be in the minds of the fans. Let’s set the scene. Watt is running his typical outside line at Georgetown like he does most of the time and like has happened on occasion before Watt has over shot his line going into turn three and went up and over banking. Usually Watt will stay on the gas and power back onto the track and lose a few spots. But tonight, when Watt went over the banking his right rear wheel dug in sending Watt up and over doing a slow roll.

The red flag was displayed and as the safety workers attended to Watt as the car was put back on all four wheels, Watt calmly fired the car back up and headed to the pits. As his crew swarmed the car like mosquitoes to a light bulb, they checked the car over and except for some very slight damage to the roof of the No. 14W, Watt was given the thumbs up sign and returned to the track. If you have ever been to a NASCAR race when Dale Earnhardt Jr., took the lead, that is what is sounded like as the crowd erupted in cheers on a much lower scale of course but you get my point.

When the race resumed Watt was on the gas and on the move and quickly worked his way back up into the top ten. At the race’s end Watt ended up in the fifth position needing another caution to advance any further. It was quite an impressive show put on by the “Electric Company” for sure.

“I went into turn three and my arm restraint got caught up on something,” explained Watt about his flip. “I’m not sure what it got caught on but when it did it caused me to spin and I just went up and over the banking and rolled it. If you look at the car, you’ll see everything looks good on it. I just wanted to make some excitement for the MAVtv crew.”

Matt Sheppard set fast time on the evening in the HAS No. 9S…

Sheppard was forced to pit early with a broken brake bleeder valve. Sheppard managed to comeback for a sixth place finish to maintain his points lead in the STSS South region…

After winning the first heat, Jojo Watson found a broken header afterwards forcing him to miss the Jones Racing Products dash race as the crew scrambled to get it replaced…

Another rough night for Billy Pauch Jr., and the Danny’s Pizza Pizzazz No. 51 team. After a convincing win in his heat race the team was poised for a good night ahead. Unfortunately the team was snakebit once again as the water pump broke in the dash race ending their night. Pauch Jr., ended up jumping into Sheppard’s backup car to start the race to pick up some valuable STSS South points. Pauch only ran a few laps before pulling into the pits…

Perseverance pays off for David VanHorn. VanHorn struggled all night with the Fred Vahlsing No. 323 through timed hot laps, his heat and the consolation race. With the consi’s only taking two to qualify VanHorn found himself on the outside looking in after finishing third in the first consi. However, an extra spot fully paid spot was available courtesy of Bill Brown Printing and Promotional Products for the third-place finisher out of the consi with the quickest lap turned. That turned out to be VanHorn and after thrashing on the car to change the carburetor amongst other things before the feature, VanHorn raced the car to an impressive fourth place finish winning the hard charger of the race award…