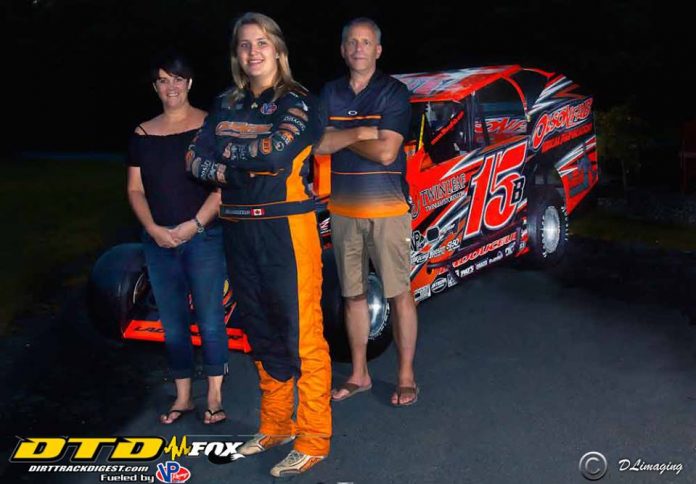 Brianna Ladouceur made history this past weekend by becoming the first woman to win a Sportsman Modified championship at Mohawk International Raceway. The hard-charging Ladouceur did it in style by racing her 15B to victory lane on Friday night at solidifying her Championship.

It has been a long hard season of racing and she is ecstatic with her championship win. Brianna thanked all her fans, her team and, of course, her mom and dad for all their support.

It has been a dream season for this 19-year-old Cornwall native who started her journey towards the championship four years ago.

After graduating from Kart racing, the 2014 season saw a new Sportsman car in the stable and Brianna had a new spark of excitement as she welcomed the new challenge of competing in the DIRTcar Sportsman class.


Brianna along with her team, led by her dad Mike Ladouceur, set out to learn with achievable goals. Going from Kart racing to DIRTcar Sportsman was a big leap and Brianna, guided by her dad, along with Carey Terrance of the Rex Racing Team and Dale Plank of Dig Race Products, quickly learned to run in the bigger class.

Brianna took things a step at a time as Carey suggested, learning how the car handled and how to read what adjustment was needed in making the car handle well.

Each year provided many different challenges and learning opportunities.

In the 2016 season, Brianna made history by becoming the first woman to win a race at Super DIRT Week.

It was the 2017 season that would test Brianna in defining her future in racing. Many obstacles and an injury weighed heavily on her that year, resulting in dismal results on the track.

“It was a difficult season in 2017,” Brianna explained, “but that is all in the past and I came into the 2018 season with a new outlook, determined to think positively.”

The second change was switching to a Bicknell chassis early in the 2018 season.

Mike Ladouceur decided to change things in a big way by switching to Bicknell chassis. Mike discussed the pros and cons of doing such a change and Brianna reluctantly agreed.

Brianna explained. “I was hesitant at first, but am really happy that my dad convinced me to change cars. With my confidence back and the new chassis, things really started moving forward on the track.”

On June 8, Brianna took the 15B car to victory lane, for the first time in the 2018 season, backing it up by taking the checkered flag a few weeks later.

This role would continue for the rest of the season, capturing a total of three wins and six top-five finishes.

It has only been for years since she began racing in the Sportsman Modified, but it is clear that the team plan worked.

“It was all about sticking with the game plan,” Brianna explained. “Four years later look, where we are. The idea clearly worked and I would have to thank my dad, Carey and Dale Plank for guiding me along the way.”

What’s next for this talented driver?

“I would like to race Mods and possibly a Big Block and see where it goes from there,” Brianna explained.

The future looks exciting for this determined young woman and I am sure she will be making headlines news once she joins the 358 Modified ranks as she did in the Sportsman class.