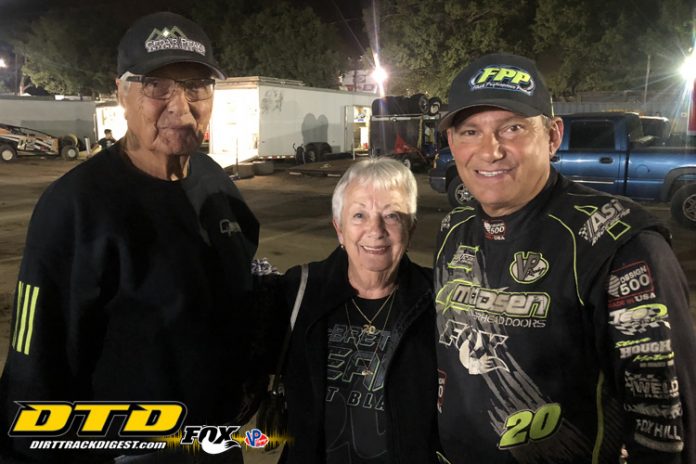 Friday marked the close of points at Albany-Saratoga and it was also double points, and with this the Modifieds ran one Modified feature for 53 laps paying $4000 to win, $260 to take the green instead of the original posted amount of $3000 for 35 laps. The Sportsman ran 40 laps for double points and $1000, with $100 to take the green. Street Stocks ran for 30 laps for $1000. Going into the night it looked like Brett Hearn would come away with another Modified title at the Malta oval. The one driver closest to Brett in points was Marc Johnson, who sat 42 points behind in second. As the Modified feature rolled out all eyes were on Brett Hearn and his No. 20 and by lap 18 Hearn disappeared of turn four and shortly after was pushed to the pits by the tow truck. From there on it looked like Marc Johnson would win his second title in three years. But as luck would have it during the remaining laps of the event, Marc Johnson also suffered a problem on his No. 3J causing the rear end to drop down and he continued to drop back in the field. At the completion of the race Johnson had finished 10th and Brett 24th. Johnson would have had to finish 7th in order to gain enough points for the title. While in the pits, Brett won the title that he thought he had just lost. Helping him celebrate his championship were his two biggest fans, his parents. Later we saw him express is dislike for the change in the schedule that made it a double points show.

The track also had drawings for students heading back to school. We spoke with one lucky young man. Six year old Camryn was very pleased with his backpack. We asked his Mom if they lived close to the track and she said no, they lived in Orange County and they love to come to Albany Saratoga. She said she had not been to Orange County Fair Speedway in quite a while. We told her she should take a look at all the improvements already complete and currently in progress. Over the past few weeks we have noticed a young lady near the exit of the track on the fan side. Tammy takes the time to thank everyone for coming as they exit the speedway, a small jester but something that many may remember the next time they are deciding where to go on Friday night. Tammy is a great representative of Albany-Saratoga.

Over the years we have attended all of the Mr. Dirt Track USA events. The most recent one on Saturday night was the 40th edition and it was a huge success. Cars and fans both filled the Lebanon oval. One sure way of measuring the crowd is the 50/50 and on Saturday at Lebanon Valley the amount won by the fan holding the winning ticket was $7004. A Fonda regular from Tribes Hill took home the big amount.

Earlier in the night we talked with Brett Hearn and wished him a Happy Birthday. Brett is the one driver who has won Mr. Dirt Track USA eleven times or 28% of the events. His first win in 1982 his last was last year. But on Saturday, Brett did not take home the big money at the top of the payoff list, the $25,500 went to the most winning driver on the high banks, Kenny Tremont, Jr. Tremont passed pole sitter, Mike Mahaney on lap 64, and Hearn then passed him on lap 68 but he was never able to catch the high flying No. 115 of Tremont. In the pits later, Tremont said with only a few laps to go, he realized the fuel pick up wasn’t picking up, even though he had two gallons of gas. It was lady luck once again playing a part.

Edmond “Peanut” Pierce has been part of the dirt track racing scene for 45 years, much of it at Lebanon Valley and is the most recent member of the Lebanon Valley Hall of Fame. The past few years he has been part of the team for his son, Chad who raced the 358 Modified No. 83. This past week they sold out their car and trailer and will no longer be one of the cars in the pits at The Valley on a weekly basis.

“It was Chad’s idea to get out,” said Pierce on Saturday night at Mr. Dirt Track USA.

Chad has kids that he goes go-kart racing with and he wants more time to do that. We asked Peanut what he would do now that he will no longer be part of The Valley scene each week and he said we just sold this past week and he needs time to think about it. A couple years ago Peanut had a battle with cancer and after going through chemotherapy treatments he is currently cancer free.

“It makes you think about things a lot differently,” said Pierce.

That is a feeling that anyone who has gone through something like a serious illness can relate to. We wish him and his wife June, who was always in the tower each week, well in whatever they decide to do with their extra time. Danny Ballard of Grand Gorge has been around racing since 1984. He began in Street Stocks/Pro Stocks (depending what you wanted to call them) before moving to Pro Stocks where he was champion in 1994 and had 17 wins. He then moved to Sportsman at Fonda Speedway. His next step was to IMCA Modifieds at Fonda where he was champion in 2002, 2004 and 2006 before he moved to IMCA at Afton. He then took some time off before returning to Glen Ridge on Sundays in a Sr. Slingshot car. Next week is the final night of points for the Sr. Sling shots and Ballard currently sits 3rd in points. He was the winner on Sunday.

Brett Deyo of BD Motorsports announced this past week the 2018 edition of the American Racer Cup Short Track SuperNationals will take place at Thunder Mountain Speedway in Center Lisle, N.Y. The 11th edition of the ‘Working Man’s Race’ has been moved from the originally scheduled venue of Afton (N.Y.) Motorsports Park. This event will now take place at Thunder Mountain on its scheduled dates of Friday-Saturday October 5-6. The change comes on the heels of struggles with the Afton oval’s track surface throughout the ’18 season, despite the efforts of promoter Ron Ford to make improvements.

“This is absolutely nothing against Ron (Ford),” said Deyo.