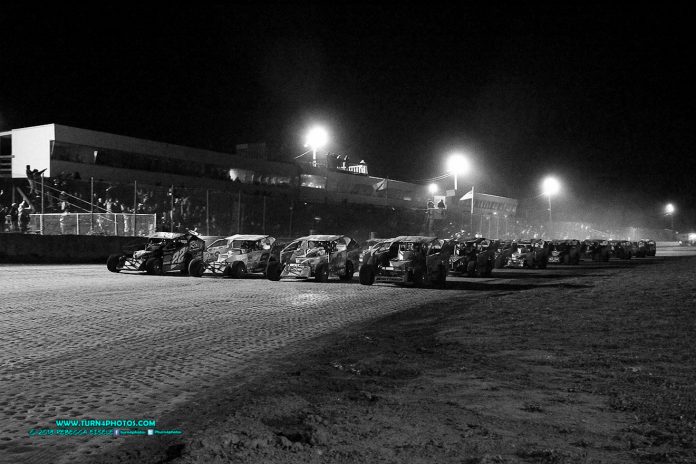 Tim Fuller made the tough choice midway through the 2018 season that racing close to home rather than hitting the road was the smarter choice for his team. That choice found him racing Saturday night at the Can-Am Speedway with the DIRTcar 358-Modified Series rather than in Quebec with the Super DIRTcar Series. The Edwards, N.Y., native made the most of the decision by winning the 75-lap, $4,000 to win feature event.

“I had a choice of going to Canada with no help or coming here where I knew I’d have a boat load of help,” stated Fuller afterwards. “So I came here five minutes from my house. Sometimes that is what you got to do. You got to start picking and choosing your shows. You have to make the local show.”

Fuller explained that he felt like being on the road he couldn’t properly prepare for the races. He was getting behind in the shop and that forced his decision to race as close to home as possible on a weekly basis. He also sold off his larger stacker trailer in favor of a more condensed truck and trailer.

“It’s just me at the shop,” he said. “My guy from Quebec comes to every show, but it is just me in the shop. It’s just a lot of work and I can’t keep up with everything that is going on. I like to go to races prepared and I don’t want anything lacking. We went to a lot of races unprepared. That’s why I said screw it, we got to cut back and just pick and choose. I would rather have been in Quebec racing for bigger money, but sometimes you got to cut back and do what you have to do.”

So far that choice has paid off as Fuller claimed the title at Mohawk International Raceway while picking up the Saturday night win. Can-Am is a place that Fuller has turned thousands of laps in his career. He used that knowledge to hit the setup perfectly for the feature. He had the dominant car on the bottom of the race track. He used a perfect restart on lap 15 to take the lead away from Ronnie Davis III.

After taking the lead, Fuller had to survive multiple restarts with Billy Dunn next to him before a late charging Ryan Arbuthnot lined up to the outside. Each one of those he knew he was good enough to keep things rolling on the bottom.

“There were a lot of restarts, a lot of cautions and you never know if someone is going to get a run going down in there on you,” mentioned Fuller. “That is how I got by the 32 (Davis) car. I just ran in on the outside of him and kept my left side in the rubber. There is always concerns there.”

There should have been no concern, Fuller was that good. He ran away at the end to take home the win. So to go along with the top prize, unlike the guys in Quebec, he also had a nice short ride home.

It wasn’t the win he was hoping for, but Billy Dunn went out on a high note on Saturday night finishing second to Tim Fuller in the season finale at the Can-Am Speedway. Dunn had one the race the last couple of seasons, but this year it was Fuller edging him out at the conclusion of the 75-lap feature.

“I think the best car won tonight, that car has been on rails,” stated Dunn after the race. “We just plain missed it a little bit. When we are at our best here we’d have been right there with him. I just had a little too much of a throttle push. I tightened up too much for how slick the track got. (Ryan) Arbuthnot showed me something on the outside that maybe if we had gotten into traffic a little sooner, maybe I could have done something. I think the best car won.”

The night was bittersweet as it was his final night driving for RLM Motorsports as the team will cease operations after this season. The team, owned by Rodney McCreadie and Rob Graham, went out on a high note with the track title.

“This is the last race with the nine car,” commented Dunn. “I have to thank these guys for all they’ve done for the last three years. We’ll take a second tonight. It’s a stout field of cars. We were right there. I’d like to have pick up a win, we’ve won it the last two years, but I can’t complain about a second place with all the wins here.”

Although the car owners are done, Dunn purchased the equipment with the hope of continuing the success next season at Can-Am.

Ryan Arbuthnot started 14th in Saturday night’s feature. Needless to say he didn’t have much to lose by trying something different so that’s exactly what he did. While everyone was glued to the bottom, Arbuthnot took it to the top. That got him all the way up to second spot in the main-event at one point.

Arbuthnot restarted late alongside of Fuller on lap 60. He thought that was going to be his chance to take the lead. Unfortunately it didn’t work out.

“Honestly I was sitting there licking my chops,” said Arbuthnot. “I thought we had it won. I might have been counting the money too soon. I sent it in there and Tim hit two good laps. I started over driving it just a touch. I think I hurt my right rear and started falling back a bit. I wasn’t hitting my marks. I don’t know. I just wanted it too bad. Tim was really good.”

Arbuthnot ended up giving up the second spot late as Dunn was able to get back by him on the bottom. He finished third.