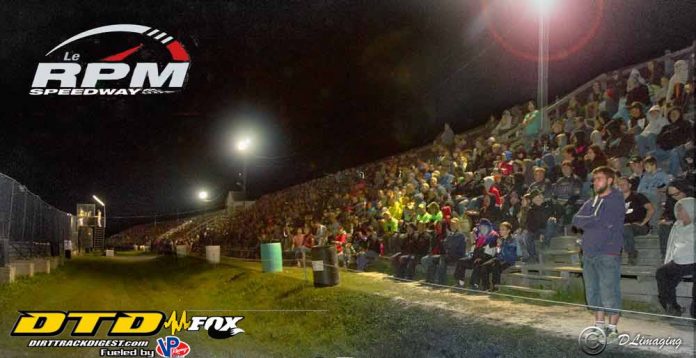 If there is one track to put on your bucket list, Le RPM Speedway is the one.

Located on the outskirts of the town of Saint-Marcel-de-Richelieu, amongst some of the best farmland in Quebec, this ¼-mile gem of a track recently hosted the DIRTcar Super DIRTcar series and will be gearing up to hold the next round of the DIRTcar 358 modified series on September 21.

Built back in around 1954, the track has gone through many changes over the years. It was primarily built in the day to race motorcycles, but over time it evolved into a high-banked, D-shaped oval. One of the more unusual aspects of this track is that the main grandstand is a part of the pits.

With the recent visit of the Super DIRTcar series, fans could mingle with the likes of Danny Johnson, Brett Hearn or the winner of that’s nights race Jimmy Phelps, who are some of the best Dirt track drivers in the business.


The fans were also talking to their favorite local drivers, bringing a more close-knit fan base to the track as they mingled through the pits.

That night’s race was one of the more existing races I have seen this summer, with Sheppard, Phelps, Johnson and local heroes Steve Bernard and David Hébert racing it out for the win. But it was watching the “Doctor” Danny Johnson come from his 12th place starting position to finish second that made the race even more exciting. Phelps eventually won the race, a well-earned win for the veteran driver from Baldwinsville, N.Y.

There is just something about the whole experience visiting Le RPM Speedway, where you can mingle with drivers, and then get some great food at one of the canteens, especially their classic poutine. Then enjoy eating your food with some good music playing in the background. Afterward, you can grab a beer and venture into the stands to watch some great side-by-side racing.