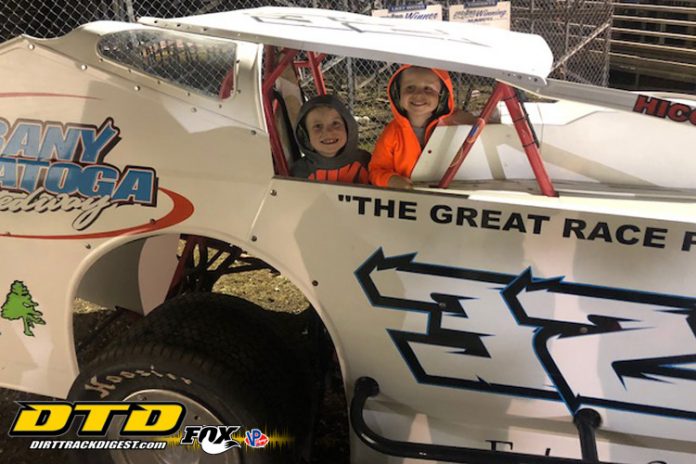 We would think that people from outside the racing world might say, “so every week you go to a track and see the same thing.” For us it never seems the same no matter how it starts and this past week Ed received a call on Friday afternoon from Mark Keefe PR guru for Albany-Saratoga, asking if he would do the opening prayer at the track that night. Without a doubt is was something different but he was glad to be asked. Over the years we have had many people step up and make a difference in our sport and many times it was a welcome change. One of the first we remember to bring the opening prayer to the tracks was Pastor David Wells who traveled the local racing circuit for Finish Line Chaplain services for many years. Another was Pastor David Miller, whom we lost way to soon. More recently we have come to know Pastor Ed Harkins, who was also a former racer. Pastor Ed serves the racing community in many ways including the opening prayer at racing events and also a prayer before the driver’s meeting. Ed thanks everyone at Albany-Saratoga for being so receptive to his words and Lyle for the special thanks.

As we walked by the display race car provided to the track by DKM we noticed two young fans sitting in the cockpit. As we snapped this photo their Mom told us they were first time fans and loving it. Owen, 7 and Wyatt, 4 seemed to be very happy with their first experience with racing. Mom said that while taking them to daycare they pass the track each day and the two were curious about the activities that took place there each week, so she brought them and says it looks like it probably won’t be the last visit they make to the races. On Friday we set out to find the car driven by Steven Kneer, grandson of Everett long time supporter of local racing and one of the original “Outlaws of Lebanon Valley” and someone we have called friend for a long time. It was great to catch up with Everett and talk with his grandson. Steven is a 17-year-old racer who started in go-karts before moving to Sling Shots at The Valley. Steven has wheeled a Limited Sportsman for a few years now and is ready to move up to regular Sportsman. Steven is a very well mannered young man who knows what he wants and says “it’s time to move up.” Steven was trying his hand at the regular division Sportsman on Friday and will move to that division next season. A few weeks ago Steve’s racing was in jeopardy due to an arm that occasionally pops out of joint, he was able to have it put back and is now able to continue his racing endeavors. Steven has two wins, four top fives and 9 top tens at Albany Saratoga. Everett says he has two other grandsons racing in Pro Stocks at Lebanon Valley making Kneer Racing a true family affair; each week grandmother MaryLee is in the stands cheering them all on.


In the Limited Sportsman class we had a chance to meet a 16-year-old driver, David Boisclair, III who, on Friday night, was proof just how determination to race can override severe pain. It was on Wednesday that David mistakenly grabbed the hot muffler on a lawn mower and the results was a huge blister on the heel of his hand. On Friday he had it wrapped and was ready to race and finished in fourth place. Heather Marr has probably been a race fan since birth. Her family has been at area tracks and part of local racing for as long as we can remember. Heather’s Dad, Gary Marr was an artist at painting and lettering race cars for a long time. Heather and her Mom, Elaine have been in the stands for many years along with her uncles and aunts who have filled many track seats over the years and still do. We first remember Jim Becker and his team returned to Afton Motorsports Park on Friday for the final night of racing at the track. Jim brought along fellow racer, Jeff Rockefeller who had never raced the track before. Jim and Jeff pitted together along with another friend and MidTel employee, Ronnie Greek who drives a Street Stock. Jim loaned Jeff some of his American Racer tires, because all the tracks where Jeff normally races use Hoosiers. Jim came home with a 10th place finish and Rockefeller in 14th. Greek was involved in an incident and placed 16th in the feature.

Friday night at Albany-Saratoga the 602 Northeast Crate Nationals rolled into the track for a 100-lap event and it was the underdog that prevailed. Brian Calabrese of Johnstown took home the $2500 prize. Calabrese was behind the wheel of a 10-year old Bicknell chassis and was able to beat some of the best in the 602 Crates. “I didn’t even expect to make the show,” said Calabrese in victory lane. At Glen Ridge on Sunday the underdog struck again. Brian Calabrese once again took away a win paying $600 and the bounty of $1200 put up by Bill Yurkewecz of Yurkewecz Auto Crushers and Jim With the Red Seat, who wishes to remain anonymous, for anyone who could beat Dave Constantino and Tim Hartman, Jr. in the Crate Modified division.

Fonda returns to racing this Saturday with the third try for the Hondo Classic for the Pro Stocks. This will be the first race back after being dark for the Fonda Fair and will be a great time for racers to get track time for the upcoming Thunder Along the Mohawk two-day weekend Friday, September the 21st and Saturday, the 22nd. “The JACK” has been moved to Saturday, September 22 along with its guaranteed 12th starting spot at Oswego for the DIRTcar big block modifieds.

At Albany-Saratoga this Friday the CRSA Sprint cars will take to the track along with the small block Modifieds, Limited Sportsman, Street Stocks and Four Cylinders. The will conclude the racing season at the Malta oval. Check the website for the Fall Vendor Fair on September 23rd. Elmo’s Speed & Supply Fall Swap Meet is scheduled for November 11th. This Saturday also wraps up racing at Lebanon Valley with the KOD Small Block Nationals plus Sportsman, Pure Stocks and Four Cylinders.