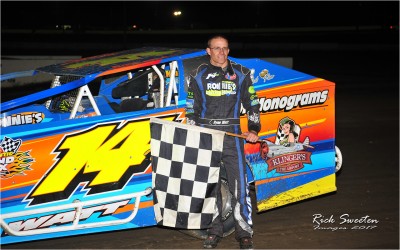 Just like he has done in many years previous, Ryan Watt will head north up Route 81 to take in what is know as “Racing’s Biggest Party” the first week of October. Watt and his family have always enjoyed taking in the atmosphere that surrounds the week-long event, but always as spectators.

However, this year when Watt pulls out of his driveway to head to Oswego he will be towing something different behind his GMC Denali pickup truck. Instead of having a camper on the hitch, the Boyertown, Pa., driver will have the hauler attached to it that transports the Roberts Racing Team No. 14W leaving someone else to bring the camper along for the week’s festivities.

Watt will be heading north to compete in the 46th running of Super DIRT Week in 2018. It’s been a long time since Watt has run at SDW and with all the rainouts this season the equipment ready to go so the team thought that this year would be the year to return.

Watt heads to Oswego with quite a resume. The team has won multiple track titles at the Bridgeport Speedway along with being a two-time champion of the Short Track Super Series South Region.


“We have been going to Super DIRT Week since the 90’s,” mentioned Watt. “We took a stab at racing sportsman there one year and ran the 358 race a couple of time. We did make one attempt to qualify for the big-block show one year as well. This all took place before 2003.”

Watt has always enjoyed the comradery that is part of SDW and even though not racing, Watt can usually be found helping out a fellow racer almost each and every day. This year the team decided it wanted to be a participant in the marquis event instead of just watching.

“I always wanted to run the race and have a shot at it,” said an excited Watt. “But just the way the last couple of seasons have gone for us with all of the special races and running the Short Track Super Series, it just didn’t give us enough time to focus on preparing a car to go up there with. This year with all the rainouts that we’ve had we thought it would be the year to go. We have an almost new Bicknell chassis that has been just sitting there with only about five races on it and we just got back our Enders big-block motor from being freshened. We just thought if we wanted to do it, this year would be our best opportunity.”

Opportunities like this don’t come along without support from your car owners and Watt couldn’t be more that thrilled that his car owners are behind him all the way.

“Our car owners Ron Roberts and Fay Lancaster are behind us 100% with this deal and just like anywhere we race, they are super excited.”