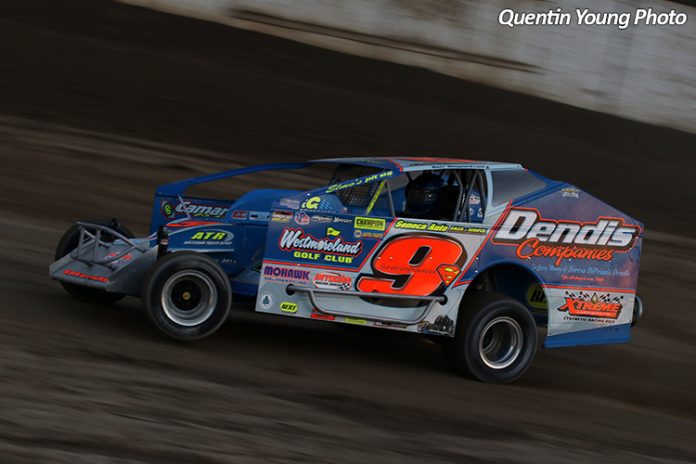 Matt Sheppard did something he hasn’t done since July. He won a Super DIRTcar Series feature. The Waterloo, N.Y., driver last won a Super DIRTcar Series race back on July 24th at Autodrome Drummond in Quebec. He had a seven race winless draught going before he came into the pits on Friday night at the Brewerton Speedway. Sheppard, the winner of the last three Brewerton series events, left with fourth consecutive win at the track and his fifth series win of 2018.

In order to help change his luck, Sheppard went back to a Bicknell car that’s propelled him to the last two wins at the D-Shaped Dirt Demon. The car once again proved its worth as he put another $6,000 in his pocket.

“It’s nice to get back to victory lane,” mentioned Sheppard. “It’s nice to feel like we were coming on strong at the end of the race. This is the same car I had here back in June, same car I had here last September. I actually hadn’t run it in a month or so. Maybe I should get it out and start running it again. I had a motor in my other car that I was trying to get worn out so I could send it back and get freshened. We pulled this thing out and it was pretty darn good tonight. We’ll see how it is tomorrow at Mohawk.”

During Sheppard’s dry spell through late July and August, he didn’t have a bad car he just had some poor luck. Not only couldn’t he find victory lane with the regularity that he had earlier in the year, but he also watched as he lost two point titles on the final nights of the year. It hasn’t been one thing, but a lot of different things that have had the team not getting the results they expect to get.


“It’s not that we’ve been running bad by any means,” he said. “It just seems like everything that could go wrong, goes wrong. At Ransomville we were good. We got a flat tire and drove all the way back up to the top five and got another flat tire. RPM we were good, but we weren’t good after restarts. We were good once we got rolling. Of course we get a caution with 10 to go and we get passed. Tonight was a different story. We got a caution with 10 to go we got from third to first. It usually does come full circle sometimes, but it seems like for the last month it hasn’t really wanted to. Maybe this will turn it around for us a little bit.”

The lack of wins and bad luck also meant that the competition for the Super DIRTcar Series title has hung close. Erick Rudolph came into the evening right around 100 points behind Sheppard in the chase for the title. The win puts a little bit more space between the duo.

“I feel like we could easily be leading by two or 300 points right now, but every time we get a good finish and get a few points something comes back and bites us again,” commented Sheppard. “We may not be winning the races we were winning last year, but we’ve been a top three car just about every tour race we’ve been to. It’s just been one thing or another that has been biting us.”

His car was very good on Friday night as he utilized the knowledge gained from being a former weekly regular at Brewerton. He stayed patient on the bottom of the track. He very rarely moved off the inner groove of the speedway which allowed him to have something for the end of the race.

“I don’t think I’ve ever seen where you can run top here for 30, 40 or 50 laps in a row and have a tire last,” cited Sheppard. “I feel like my car was good enough that every time I went up there to pass somebody I only had to go up there for two or three laps tops.”

The key move of the race came after a lap 90 restart. Sheppard planted his car in the middle groove to drive around Tim Sears Jr., for second.  This gave him the preferred position as the race leader Pat Ward entered traffic. Sheppard was able to see where Ward and the lapped were going to go. Once they made their choice, he made his. He stayed glued to the bottom and took lead down the backstretch.  He came around to the white flag as the leader.

“The caution came out with 10 to go and I knew we had to take a stab at it,” stated Sheppard. “Our car was good enough. I was able to get around Timmy (Sears) and started catching Pat (Ward) a little bit. I didn’t think we’d have anything for him then we caught some lapped cars. Fortunately for me, I was hugging the bottom and Pat was running the middle. The lapped cars were also running the middle. It benefited me, there was no doubt about it.”

Sheppard hopes this win is the sign that the season is going turn in his favor and that the bad luck bug is finally behind them.

“Hopefully this is a turning point,” he said. “When we won the last one at Drummondville at the end of July we thought that was the turning point too. We definitely got some good momentum. It’s in one piece. I don’t think it’s got a scratch on it. It was another good night at Brewerton.”