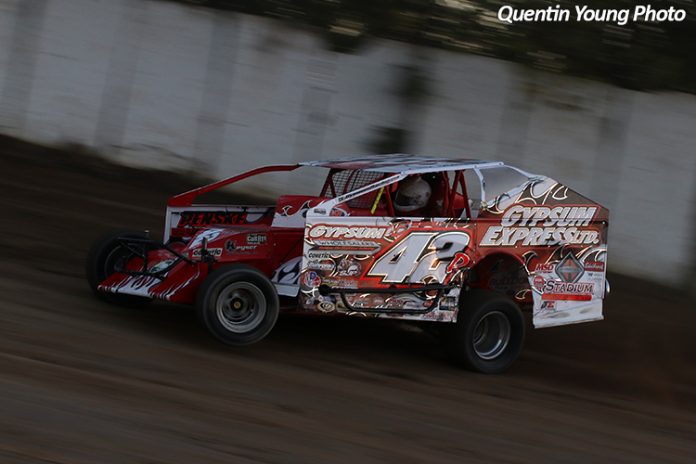 At 61 and as a professional race car driver, Pat Ward has seen a lot in the decades behind the wheel. Leading more than half of the 100-lap affair on Friday night at Brewerton, Ward was on cruise control and could envision with almost near certainty a big $6000 winners check. Then things got cloudy, then black. Ward was victimized by the lapped cars battling in front of him with just one lap left in the feature. Some may say that racing is cruel, and the lapped car had every right to hold his line, others look at it as robbery.

Your heart had to feel for Ward. “The Genoa Giant” is well liked by competitors, fans and just about anyone that spends five minutes with him. You hate to see anyone lose a big payday due to traffic unless its your favorite driver that’s going to benefit.

“I’ll be unable to sleep tonight but tomorrow will be okay,” stated Ward.  “I will be focus on the next race. But I haven’t won a Series race in so long and to have it taken from me by a lapped car is just a very bitter pill. I didn’t know where to go with the lapped cars. They were all over the place. With 10-to go and a clear track after the last caution I thought for sure I would be okay. It ended up it was the same three cars back there fighting for last place.”

Even his fellow competitors felt awful for Ward. Gary Tomkins, a fellow Modified competitor at Brewerton and a former Mr. Dirt titlist said, “When I first started out racing you were told to just let the leaders go by, not to hold them up. I feel bad for him he ran a great race”.

Scott Jefferies, the crew chief for Larry Wight also was quick to comfort a visibly angry Ward as soon as he exited his car after the feature.

“If that had happened to me I don’t think I would be so gracious,” said Jeffery.

Ward picked up the feature win at Fonda Speedway on Saturday night. It marked his first win there in 8 years.

Did you know.. ??? Pat Ward when not racing, keeps himself in shape by playing racquetball 3 nights a week during the racing season and in the offseason its nearly a 5 night a week hobby.

Pat Ward will once again make an attempt to qualify for Super DIRT Week. He will utilize the same car he drove at Brewerton on Friday night albeit with a new body on it.