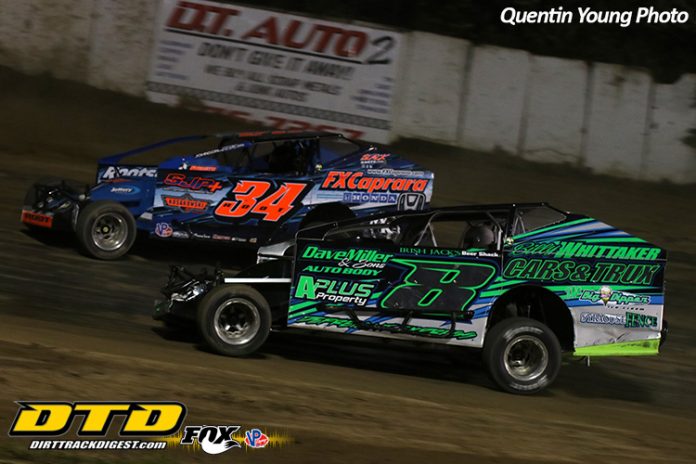 I have taken some time off from writing because my local tracks haven’t raced in a few weeks. A few weeks ago Brewerton, Fulton, and Utica Rome all hosted the Lucas Oil Empire Super Sprints and it was each track’s championship night. Friday and Saturday had some amazing racing in every division with some of the best Sprint car action I’ve seen all year. Sunday got washed out Labor day weekend so I haven’t been to a race until last Friday.

The Super DIRTcar Series Modifieds were joined by the DIRTcar Sportsman for a 100 lap and 50 lap tour race in each respective division. Both races were sensational. Larry Wight took an early lead at the start of the Universal Metal Works Duel at the Demon. It wasn’t long before Pat Ward took over the lead and held of every challenge during every restart after the cautions. The last caution of the race allowed Matt Sheppard to catch up with Ward, who eventually use lapped traffic to gain the lead with a few laps to go.

Ward was unable to counter Sheppard’s challenge and had to settle for second place. Sheppard celebrated his fourth consecutive Super Dirtcar Modified Series win in a row at the D-Shaped Dirt Demon, using the same car each time. Pat Ward was happy with second place, and with his car in one piece considering the traffic jamb he was trying to work his way through. Tim Sears Jr., finished a solid third place. Eric Rudolph and Larry Wight rounded out the top five.

The Sportsman race was a fun event to watch as well. Alan Fink was the eventual winner with Kevin Root in second and Corey Barker in third. Chris Mackey and Will Shields finished fourth and fifth respectively. If the racing is this good for the upcoming Hurricane 100 during Super Dirt Week you won’t want to miss it.

I was surprised when a friend and fellow Pastor came up to the tower to say hello and catch up on a few things. I didn’t even know he’s a race fan. Now we have more in common to share. Maybe we can recruit him to serve with us in the Finish Line Chaplain Ministry. I’m going to ask him the next time I see him.

Between the heat races and the last chance qualifiers I saw a spectacular sunset on the western horizon and took a few pictures of it overlooking the haulers that packed out the pit area. The amazing contrast of the colors reminded me of God’s glory and creativity.

“And the glory and majesty and splendor of the Lord will be revealed, And all humanity shall see it together; For the mouth of the Lord has spoken it.”
ISAIAH 40:5 AMP”

This is a prophetic foreshadowing of a time not yet realized around the time King Uzziah died in 740 B.C. to around 701 B.C. Isaiah was seeing God’s glory as He intended to reveal it. The visibly tangible glory of God is called shekinah. Shekinah is the light that envelops His presence. It can also appear as a mist or a cloud as it did to the Israelites during their exodus from Egypt.

Why is something written around 2800 years ago important to us today? God’s glory accompanies His presence, so anywhere we see His glory He is near. I’m not referring to His omnipresence. That refers to Him being able to be everywhere at once, because that speaks of His resident presence outside of the limitations of time and space. The presence of God that allows us to see and experience His glory is called the manifested presence of God. This is when God personally shows up and all of His glory and majesty are experienced in such a powerful way that we’re left in awe.

Jesus Christ walked in the glory, saying He is the light of the world. Then He changed the game by saying

He was referring to those of us that were born again spiritually through faith in His atoning works.

Isaiah saw the coming glory just over 700 years before Jesus Christ manifested God’s glory on the earth. Jesus looked ahead at those of us who would believe on Him as our Lord and savior, and prayed in advance that He was giving is His glory for a specific purpose of creating the perfect environment for Him to dwell in our hearts (spirits). Through the indwelling Holy Spirit we can experience the glory of the Lord as He inhabits us. The whole idea Jesus had was to unite His followers by giving us His Spirit and glory. He continued His prayer saying:

“I in them and you in me—so that they may be brought to complete unity. Then the world will know that you sent me and have loved them even as you have loved me. John 17:23 NIV”

The glory of God that accompanies Jesus Christ on the earth was given to His family, the Church, to manifest within and among us, to unite us and provide the evidence that the Father sent Him to redeem us. Only the Holy Spirit can reveal Jesus Christ the Messiah as He truly is, so we became vessels of glory for Him to use to present the evidence that He is alive and seated at the right hand of the Father interceding for us.

This was described by Mark when He wrote this statement to close His Gospel message:

“And they went forth, and preached everywhere, the Lord working with them, and confirming the word by the signs that followed. Amen. Mark 16:20 ASV”

I’m always blown away when God decides to manifest Himself. He loves to show up and show off His glory and power. My heart’s cry as Pastor every time I lead a meeting is “Send the fullness of Your Spirit, shekinah glory fall!” Then we’ll be able to fully realize what David saw.

“The heavens declare His righteousness, and all the people see His glory.
Psalm 97:6 KJV”.

I pray you have a glorious week, and enjoy yourselves at a local dirt track. The Kenny Wallace Driving Experience will be at Utica-Rome September 22nd of you have a need for speed and a $100 to spend. I’ll be preparing for some other things next weekend so I wont be at the tracks. I’ll see you all at Outlaw 200 Weekend at Fulton Speedway in a couple weeks. Until then, go light your world with the glory of God.

We can be reached at Finish Line Chaplain or Kevin Westcott Ministries on Facebook, and by email at flchaplain@windstream.net.