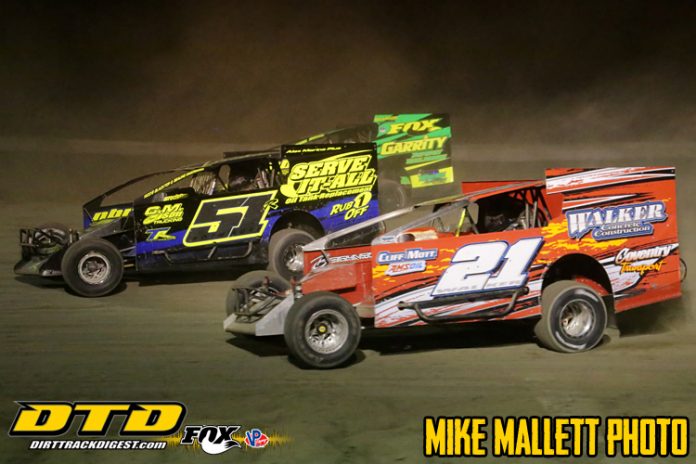 By his own admission, Shaun Walker won the biggest race of his career on Saturday night at the Thunder Mountain Speedway in picking up the victory in the rain-delayed Wade Decker Memorial.  Walker earned $5,000 for the win, but it wasn’t about the money.  It was about his friend Wade Decker.

As a young racer Walker pitted next to Decker.  Decker helped Walker by giving him advance and working with the young driver.  The two became friends both on and off the track.  That’s what made Saturday’s win extremely special for the Masonville, N.Y., driver.

“I don’t think I could win a bigger, better race than this,” commented the soft-spoken Walker.  “I knew Wade.  When we first started racing we pitted next to Wade.  He helped me out quite a bit when I was first getting going back in 2001.  I was racing Pure Stocks back then and he was in the Street Stocks.  I knew him through racing and knew him outside of racing.  He was one heck of a guy and to win a race in his memory is a huge honor for one.  I don’t think I could win a bigger race myself.  It means a lot.”

In getting the win Walker had the battle of a lifetime with Andy Bachetti.  The two drivers were never separated by more than a few car-lengths over the course of the final 30 laps.  Walker stayed on the inside of the speedway with Bachetti on the cushion.  The two lanes were equal throughout the main allowing the battle to continue lap after lap.


“It was pretty wild I’ll tell you that,” stated Walker.  “I kept seeing him coming into the corner.  I was just trying to hit my marks while keeping the car straight.  If I could keep it straight through the corner it had pretty good drive coming off as long as I kept the tail under it.  If I over drove it or couldn’t keep the back end under me I’d be loose and couldn’t get the drive off.  I learned that in the beginning when I was over driving the car.   Once I got out front I could slow down to go faster.  I was just keeping the car straight.”

Having someone next to you, even taking the lead from you can be nerve wracking.  Walker had to force himself to focus and be consistent as the pair swapped the lead in traffic on several occasions.  Over the final few laps he didn’t even look at the lap counter.  He focused on hitting his marks on the inside lane of the track with his Gabriel Racing Engines powered Bicknell.  He missed the two to go sign and the white flag before seeing the checked.

“He was obviously fast flying up there, but when you run in hard on the outside you are kind of getting your tail around so I don’t think he had the drive to complete the pass,” he said of the battle with Bachetti.  “You just got to tell yourself to let off the gas and roll the corner.  You have to tell yourself to do it because you see him there and you stay in the gas you are going to get loose and he is going to go around you.  In your head you have to keep telling yourself to keep doing what you are doing.  I kept the car fairly straight and that’s what helped us win the race.”

Bachetti wasn’t happy about his second place finish, but the he took it in stride.  The Sheffield, Mass., driver had been able to take the lead in traffic on lap 34.  He then lost the lead on lap 37 to Walker.  The pair appeared to come back around to the line with Bachetti as the leader on lap 38.  Unfortunately, the caution came out and officials reverted the last completed lap placing Walker at the point for the restart.  Bachetti was not a fan of the decision.

“I was definitely the leader, but it is what it is,” mentioned Bachetti.  “I hate getting beat like that.”

As far as the battle with Walker, Bachetti had fun racing side-by-side for so many laps.

“It was fun,” he said about the race with Walker.  “The track was great.  The cushion was really good, but it kind of faded off and I couldn’t get the run on him.  The Billy the Kid motor was really good tonight and I’m happy with it.  We had a good car tonight so overall I’m happy.”

Hard Tire for Higbie Pays Off

Jerry Higbie Jr., isn’t a regular at the Thunder Mountain Speedway, but he considers the Southern Tier facility one of his favorite tracks.  On Saturday he was able to drive his No. 97 from mid-pack up to third.  He went with harder tire selection which paid off during the longer runs of the race.

“I put a little harder tires on it,” cited Higbie.  “It was possibly too hard to win the race.  I was able to lean on my car pretty hard and on the long runs when guys would start to fade I could do a lot of passing.  It kind of played into our hands.  That last run there I thought I would start catching those guys at the end of it, but I never got going again.  I don’t know if I sealed something up or.  Other than that I felt good the whole race.”

Higbie did his damage with a car that he’s been running for several seasons.  It’s the old faithful in his stable and it proved why on Saturday.  It’s also the car that he uses to improve the quality of cars being built for HigFab Chassis customers.

“This is a car that I’ve been running for three years now so I know the ins and outs of it,” stated Higbie.  “I changed the floors and the racks in it, but I keep the basic car so I’ve really gotten to know it pretty well. I do a lot research and development for our company with this car.  I hit on something at Accord this year and I’m starting to spread it through the customers and stuff.  That is how we have to learn as a chassis manufacturer.”

Alan Barker earned the 2018 Track Champion at Thunder Mountain Speedway.  By virtue of the being the champ, Barker made the dash for cash.  This allowed his team an extra set of laps on the track.  Barker felt like that was essential in helping him get the car right for the main-event where he ended up finishing fourth behind Higbie in his own HigFab car.

“We got here tonight and the car was way off,” said Barker.  “It was way too tight.  That dash for cash really helped as an extra track tuning session there.  We were able to make a few more adjustments.  We should have went further to come on earlier, but I’m really happy with the run.  It was a lot fun, passed a lot of cars and had a ton of side-by-side racing.  I think we are going home with smiles on our faces.”

Like the leaders, Barker had his own battle with Billy Decker.  They were stuck together for much of the second part of the 51-lap feature.  Barker eventually got the drop on Decker in the final few laps.  His car was good on the top side which was the key to beating the veteran.

“I drove around the outside of Billy Decker there with 10 to go,” commented Barker.  “Then the caution came out and I was on the inside for restart.  He drove right up to outside, but it didn’t look like he could rotate his car up there.  I was right on Jerry’s back bumper.  I was okay on the bottom, but couldn’t get off corners again.  They started pulling away from me.  I knew I had to get back up there on that top.  Then I was able to run them back down.  I drove around him (Decker) again.  It’s good to race with someone that is that smooth and runs that good of a line because I was able to thread the needle between him and wall.  I had faith he was going to leave me space.”

An opening lap tangle collected five cars.  Paul Jensen was the only driver not able to continue as the hook was necessary on the front-end of his No. 57…

Brandon Walters started on the pole of the feature.  He was strong early in the feature before something let go on his car forcing him to come to a stop on the outside of turns three and four while also surrendering the lead.