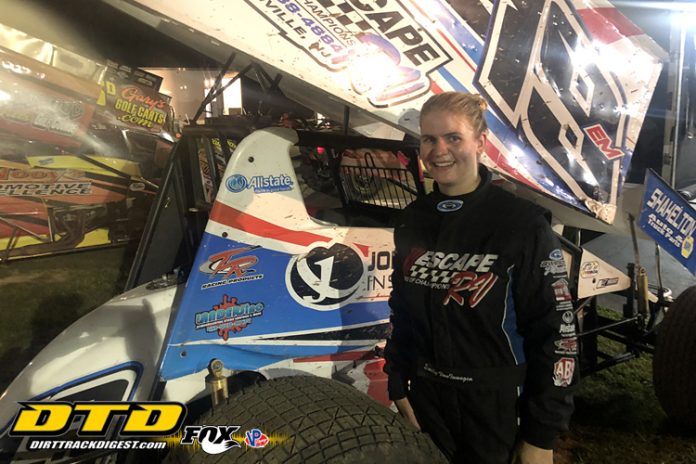 The season came to a close at Albany-Saratoga on Friday night and while looking at the line up board we noticed a women in several of the divisions. In four cylinder it was Lana Jordan, in Limited Sportsman, Emily Quinn, in 358 Modifieds, Allison Ricci and in CRSA Sprints Emily Vaninwegen. This prompted us to take a look at the women in local racing and how things have changed. At one time women were not even allowed in the pits a local tracks. Of course you say, what about the “Powder Puff” events we hear about back in the day. Well, although they were allowed to race, they still weren’t allowed in the pits. They sat in the stands until their event was ready to run. They were then allowed to go on the track and take the wheel and race. After their event they were required to return to their seats in the stands.

Along the way there were women that challenged the rule. Mitzi Hart was one that battled management until she was allowed to race, paving the way for others like Sue Curley, Kathy Tremont and Jessica Zemken Friesen. We recently lost Kathy after a long battle with MS. JZ won in every class she raced.

A few years ago we spoke with Modified champion Mike Colsten and he relayed a story to us of how he went to Rolling Wheels to race one time with just one crew member, his wife. At first she was told she would not be allowed in the pits, but when Mike said he would have to leave if she was not allowed to enter, because as he explained, she was his only crew member and he would not be able to race without her. She was allowed to enter the pits and that was another triumph for women. Small steps by determined women have made it possible for those who race today.

Speaking with Allison Ricci on Friday, she said her year has been tough because of rain outs and motor issues. There have been only six 358 Mod shows at her home track, Orange County Fair Speedway and she has been washed out at Lebanon Valley all season due to rainouts. She was looking forward to racing at Lebanon Valley the next night for the KOD 358 Modified event. She turned in a career best finish on Saturday night in the KOD event at The Valley. We asked Allison what it was like to receive the donation of the winners share at Fonda when Bobby Varin won the Modified event at the special Wednesday night show at Fonda a month ago. She said the Palmers and Varin are great race people and she was thrilled to accept the money for the Miles of Hope for Breast Cancer organization. She thanks them for their great generosity.

We also spoke with CRSA Sprint driver, Emily Vaninwegen who said her year has sucked, she has only a few more events and hopes things turn around by next season. We looked a Emily’s finishes this season and found she has four top tens. Emily knows that all racers can go through a bad streak like the one she’s having but she plans to keep going and hope things get better. Next we spoke with the Four Cylinder chauffeur of the No. 27s (s is for single cam) and recognized the young lady as someone we had spoken to a while ago. Lana Jordon was back at Malta for the first time this season on the final night of racing and it was her first ever 40-lap event. At the end of the feature she found herself in the runner up spot for the single cam division. She said she had a great time with the longer race. We hope to see her back next year.

We also spoke with Emily Quinn who was standing in the pits next to her hauler, having already put the car away for the night and saying she was not going to race the feature. She said she had an issue the week before and thought it was fixed but when she went out for warm ups she realized the problem was still there. She decided to park the car for the night because she said if something goes wrong out on the track it would cost a lot more and also she didn’t want to effect a fellow competitor. We commend Emily for her positive thinking and look forward to 2019 with her and the other competitors. On Sunday we finally got to the Green Mountain State of Vermont to see the new 1/2 mile clay oval at Devil’s Bowl that was put in at the end of last season. Mike and Alayne Bruno have reason to be proud of the beautiful racing facility that have worked so very hard on. The special Vermont 200 Weekend gave the fans a chance to see some of the best in our sport competing in a $10,000 to win 200 lap event for 602 Sportsman Modifieds. A total of 100 racers were in attendance on Sunday, 56 Sportsman Modifieds, 30 Mini Stocks and 14 King of Dirt Pro Stocks. One thing we appreciated seeing was the sheets handed out to the fans and drivers, with driver roster, track points, a page to log race results and lap sponsorships. Lap money totaled over $7300. Mike and Alayne each have specific jobs they tend to during the event. The day started with a drivers meeting with all drivers seated in the pit grandstands. Promoter Bruno explained the rules and took all questions. With temps in the 80’s it was a beautiful mid September day. For many fans Big Block Modifieds are the only thing they want to see. On Sunday Devil’s Bowl brought together a mix of Modified and Sportsman drivers competing on a level playing field in 602 Sportsman Modifieds. Event winner, Brett Hearn along with Kenny Tremont, Jessey Mueller and Danny Johnson were just some of the Modified drivers in the field. It was Brett’s 910th win. As die hard Modified fans, we never thought you could put big block Modified drivers in 602 Sportsman Modifieds and we would be satisfied with the results, but that was not the case on Sunday. Maybe we were looking at the future of our sport.

Note for racing fans, this Wednesday September 19th the O’Zoner Drive In movie theater in Broadalbin, NY will host Dirt Rush a reality series directed and produced by Dave Whitney. The idea came from Rob Hazer, KOD Series promoter. Dirt Rush was developed by Whitney and Hazer to show a raw, unscripted behind the scenes look at efforts put in by drivers during a night of racing.