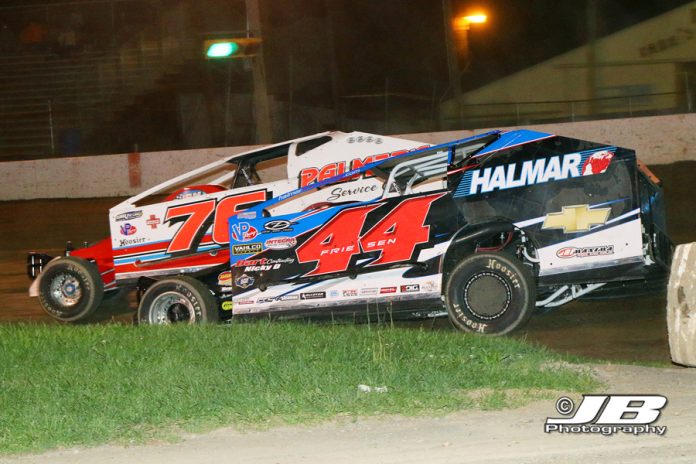 FONDA, NY – Picking up his eighth win of the season at Fonda, Stewart Friesen destroyed the field with ease on Friday night in the opening event of The Jack weekend at Fonda Speedway. Using an outside pole position, it was only 17-laps into the 60-lap affair and Friesen was the leader of the 16-car field and never took his foot off the gas for an impressive win aboard his Halmar sponsored DKM chassis.

Originally scheduled for 100-laps, the DIRTcar 358 modified south series event was cut back due to the threat of rain and severe weather that was on its way from the western edge of the state. Only 16 cars were on hand for the event.

Bobby Varin lead the field to the green aboard the Alton and Carol Palmer owned 76A and quickly tried to check out on the field. With Friesen and Pat Ward in tow, the three veteran modified pilots tried to run away and hide from the field. Varin was super strong for the first 10-laps but as is the case so many times when Friesen is in the house, your time as the leader is limited.

Freisen closed the gap multiple times exiting turn four and just 7 laps later he was in control of the lead on lap 17.


Meanwhile, the racing was hot and heavy for positions three through five. Pat Ward had his hands full first with Matt Sheppard who was piloting the 121 entry but as quickly as he had reeled Ward in and was challenging Varin for second relentlessly, suddenly he dropped out with terminal mechanical woes. Next up to challenge for third was Erick Rudolph. Throwing everything but the kitchen sink at Ward, he just couldn’t pass Ward over the latter half of the race and ended up third.

“It was hammer down. My dad drew us a good pill to start us up front. Bobby got going there with a good lead and I kind of thought it was game over. He got bottled up by lapped traffic and we were able to slip by and hold him off,” said Friesen in victory lane.

It was reported through various sources that the current track promoter Pete Demitraszek is no longer going to be the promoter at Fonda. It was speculated that Brett Deyo would become the new promoter at Fonda in 2019.  Demitraszek was short and quick when called, he did not care who was coming in.  Attempts were made to reach Deyo as well but the call was unanswered…

Look for Larry Wight to do double duty on Saturday with a big block and a sprint car.
Former Fonda Speedway promoter Ric Lucia was on hand as a spectator. He spoke highly of the late Greg Hodnett, who was killed on Thursday night in a racing accident in Pennsylvania.

“I got to know Greg pretty well and always thought highly of him. People look at race car drivers and some don’t realize that some of these drivers have college degrees. Greg had his engineering degree and so when his racing days were done he could always fall back on his degree to earn a living. It’s a sad thing that he’s gone for sure.”

During Ric’s tenure as a promoter at Fonda, Lucia ran a 410-sprint car open event and Hodnett was a competitor in that race…

Noted car owner Jake Spraker was on hand with his spec 358 modified that Rocky Warner drives. Spraker said that he’s contemplating retirement since he hasn’t been feeling well lately. When asked if he decided to retire this winter would he have any regrets about his racing career as an owner. Spraker said, “I don’t have any regrets. I had the best in the business race for me. We won a lot of races together”.

Spraker received a lot of flak for his comments on Facebook about sportsman drivers not attending the recently held Vermont 200 at Devils Bowl which paid a tidy $10,000 to win.

“You got guys that are willing to travel to places like Bridgeport, Georgetown for a thousand dollars to win and here is a track paying $10,000 and you don’t go because you say you didn’t want to get home in the middle of the night. You had no idea to begin with that it was going to end so late, so I am not buying that argument at all.”

Spraker recently sold his big-block and now only has small blocks in his arsenal. Under the hood of Rocky Warner’s car was a new LJL/Kevlar spec 358.

“I sold my big-block to a rookie. He’s going to get a big surprise when he steps on the peddle of that monster,” said Spraker.

It is possible Jake could field a small block for Rocky to drive at Oswego but as of now he’s undecided.

“I would have to finish in the top three to just make my expenses for going there,” said Spraker.

Look for Keith Flach to return to the Super DIRTcar Series tour on Saturday and he’s also bringing a second car for Austin Langenstein.