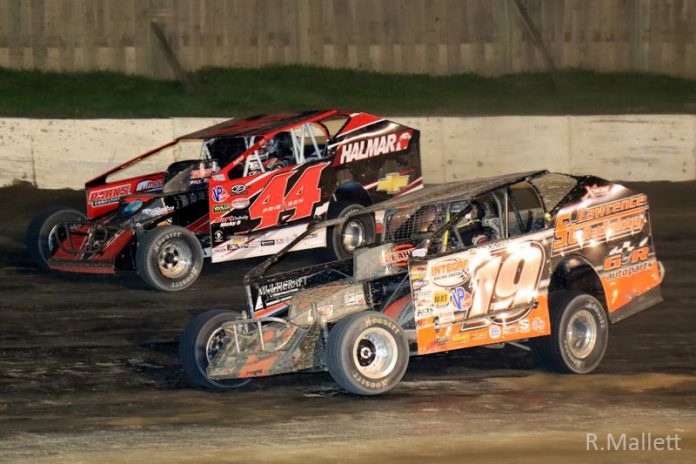 Last year in the final race of the season at the Fonda Speedway Tim Fuller came up a lap short of claiming the win in the 100-lap Super DIRTcar Series event. His right rear tire gave way which ending up giving the win to Bobby Varin. On Saturday night, Fuller got his redemption and even more important trophy as he captured the Jack Johnson tribute race simply known as ‘The Jack.’

“When I started racing he was it,” Fuller said of Johnson. “We became pretty good friends. To be able to win this, that is a trophy that doesn’t get discarded.”

Fuller had his work cut out of him as the 2017 Fonda Speedway track champion rolled off from the inside of the seventh row. He methodically picked off cars one at a time over the early portions of the race moving his way into the top five by lap 40. By halfway he was third. With 25 laps to go he took second before taking the lead from perennial Fonda hot shoe Stewart Friesen on lap 87.

“He’s (Friesen) always on fire here,” commented Fuller. “He was out there leading and stretched it out pretty good. What happened was he just overheated his right rear. I stayed right on the bottom and that is what I was hoping he was going to do. It happened a lot last year when I was running second or back in the back. Those guys that get stretched out there would over heat their right rear tire and you could pull them back in. All-in-all it was great. It had to be a good crowd reaction. I know how that is. Stewy’s been the man to beat for six, seven, eight years or so. So yeah, this is pretty big.”


The win continues to add to Fuller’s strong September. He won a DIRTcar 358-Modified Series race at Can-Am Speedway to kick off the month before a Super DIRTcar Series triumph at Mohawk International Raceway last weekend with his No. 19 Bicknell mount. So needless to say, it’s been a very good month so far for the Edwards, N.Y., driver. He attributed some of that success to scaling back his racing program.

“Definitely cutting back didn’t hurt,” mentioned Fuller. “We are still capable of doing this, just not at the level or racing, racing and racing. I think concentrating on the serious ones and taking them as they come. If you do that, some you are going to make out good at. Last night we didn’t show up because I didn’t have time. We’ll just take the big ones and hopefully we can capitalize on them.”

Although he didn’t win the big prize on Saturday night, Friesen did take home top honors on Friday night. The Sprakers, N.Y., driver was able to capture the DIRTcar 358-Modifed Series feature. That win came with a nice $4,000 payday.

“It was different with spec motors,” mentioned Friesen. “You have to keep these things wound up and I was lucky dad drew one for me. That was good. The car was good, no complaints. We were lucky to get it in with weather coming. There wasn’t a lot of cars but there were top notch guys throughout the field. I have no complaints.”

Although he started on the pole, it was Varin who jumped out the lead at the start. Friesen took a shot early at Varin and missed. He made a second run at him on lap 20 in turns three and four. This time he was able to make the pass stick. From there he cruised to the win in his Billy the Kid Performance Engines powered DKM.

“When he jumped out at the start and we were running pretty much wide open I thought that was it,” stated Friesen. “I got there once and got in the mud and damn near wrecked the both of us. The second time he got bottled up. The top was a little bit dirty and I was able to slip by on the bottom.”