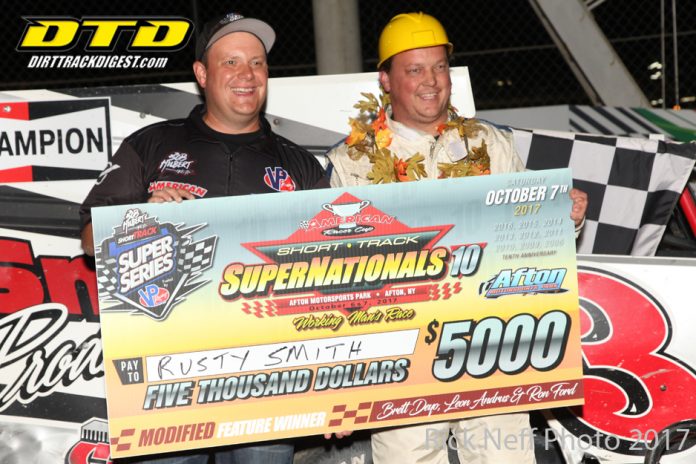 FONDA, NY – Reached by phone today, Brett Deyo confirmed that he is indeed taking over the Fonda Speedway for a multiyear deal with the Fonda Fair board. “I couldn’t speak publicly about the deal until today per the fair board, so I had to politely decline interviews and not make any statements until today. “said Deyo.

“Today is like a two-battery day” said a laughing Deyo when reached by phone this afternoon. “Fonda is such a historic track. People love to talk about it. Either you’re for it or against it but people talk about it and that means people are interested in the goings on at Fonda” said Deyo. “When I was a kid my parents would take me to Fonda and to the 200. Then as I grew up and started writing for AARN, I wrote about Fonda. Its just such a neat place and has such history.”

Deyo will entrust Jaime and Denise Page to help run Fonda and help take some of the pressure off the day to day things that promoters must do. The Page’s ran Afton Speedway for 7 years. Denise who has years of experience in managing and running the concessions will once again be running them at Fonda.  She will be working the booth on race nights and help with the ordering of product during the week.  Jaime will be helping with the property maintenance during the week.

“I’ve reached out to Ric Lucia and Matt DeLorenzo to get their opinion on things. On how to run the track successfully and not get tripped up with mistakes that they made while they had the track” said Deyo.


For 2019 teams will have a few weeks to use up their inventory of Hoosier tires. “We will be using American Racer tires. It’s the same compound tire that was used here when Ric Lucia ran Fonda. Its been tried and tested here and it’s a tire that will be able to handle the racing. We will only use one tire compound here and Glen Ridge has also switched over to American Racer and they too will use the same tire that Fonda uses so the teams won’t have to buy a different compound to run either track and it keeps the costs down, so you don’t have to buy multiple compound tires”.

American Racer is the exclusive tire that is used on the Short Track Super Series and is going to pay out over $50,000 in point fund money and dole out free tires at the banquets. It was a no brainer for Deyo to switch over to American Racer from Hoosier.

“I didn’t consider Hoosier since American Racer is going to help me pay $2400 to the modified and $700 weekly with a $100 to start the Sportsman weekly.” Deyo went on to add “I have no issues with DIRT and I really like Dean Renyolds a lot. I think he’s going to be great for the Series, but I wanted Fonda to be independent and do things the way I have been doing them with Georgetown and the STSS.”

As far as big-block and small block modifieds are concerned, the rules package will mimic what is used at Georgetown Speedway, a track that Deyo owns in Delaware. “The biggest small block you can run is 450 cubic inches and those big small blocks will have to weigh 2500lbs, same as the modifieds. The easiest way to make power is to increase the cubic inch. It’s cheaper to get a bigger engine than to go and buy $15,000 heads. You can buy a 410-steel block from dealers in the Midwest for around $15k instead of putting a pair of $15,000 heads on the engine and then paying for the machine work to increase the horsepower. I have spoken to a lot of people especially at PRI and some other racers and it’s a perception that you need to spend a lot to make a lot of power.”

“If you look at the last 5 winners I have had on the STSS, none of those teams are the “super teams”. Higbie, Smith, Creeden etc.”

Deyo isn’t looking to steal cars from the other area tracks, Albany Saratoga and Lebanon Valley. “I have never had an issue with Lyle (Devore) and I host a STSS event at Albany Saratoga and there aren’t any issues. People told me when I took over Georgetown I wouldn’t ever be able to get along with Delaware International. Well, today the first call I got once word got out about the Fonda deal was from Charlie Cathell wishing me well.”

“I want people to come to Fonda because they want to race there. I am sure we will make some mistakes in our first year as its going to be a learning experience, but I wanted to get the word out ahead and tell people what to expect in 2019. I am very excited about the 200 in September of next year. Its going to create a lot of buzz especially with $20,000 to win and its been 17 years since a 200 has been run at Fonda. The fans wanted it, I want it so all in all I am very excited about this opportunity.”

“We will be checking weights and cubic inches every week. Just like we do on the STSS. There will be no games being played with the weights and the cubic inch. I want a level playing field. People already know this when they come to an STSS event, so it won’t be any different at Fonda”

Deyo has already gotten permission to set up his camper on the fairgrounds property so he can have an office on site. “So, when we race at a place like Woodhull, I can come to Fonda on the way home or there and run the day to day operations. If we have an event at Georgetown I will be there. I will be using Angela Hoard a few days a week to do some clerical things. She already helps me out on the STSS and she only lives a few miles from Fonda, so she will be a great addition here.”.

Next up for Deyo over the winter is to obtain equipment for the track. “Its kind of like when I took over Georgetown. They didn’t have any equipment, but I have a few people on the look out for the things we will need, and I am sure by the spring we will have what we need” summed up Deyo.

Deyo will continue to run Georgetown on a special only basis. Fonda will race weekly on Saturday nights. Look for a new website and schedule to come out soon.