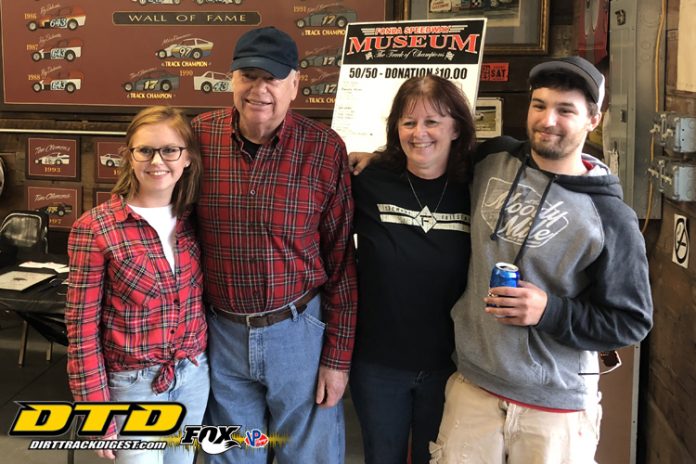 Series and Sanctioning, Dean Reynolds, at work. Beginning after the World Finals in Charlotte, NC Reynolds will move into the position being vacated by Mike Perrotte. Dean said, “I’m single, and I rent so I can pretty much do what I wish.” The first thing we noticed was that Dean took charge of the drivers meeting and the pit area; someone started a car during the meeting and Dean had it shut down. Later he was lining up heats moving the show along because there was a threat of rain. Perrotte has been series race director for the past four years and when we spoke with him on Saturday he said it was time to go and that Dean would make a great replacement. We think he was an excellent choice and we wish him well.

On Saturday at Fonda Speedway, the pit area was overloaded with race cars for a five division racing program on the second day of the Thunder Along the Mohawk weekend 2018. With the grandstand filled to capacity and many fans in the bleacher areas it was truly a fitting way to honor legendary Fonda Speedway driver Jumpin’ Jack Johnson with a tribute called “The Jack”.

The Fonda Speedway Museum was in full swing on Saturday with many enjoying the huge display of Fonda history and memorabilia on a special weekend for the track. Thanks to the dedicated foursome shown here, Jessica, Dave, Jackie Lape and Peter Schwab, the museum is one of the most popular attractions at the track each race night.

On Saturday at Fonda several of the competitors felt the sting of the historic oval the first being veteran racer, Billy Decker of Unadilla, N.Y., whose No. 91 Modified was destroyed after something broke on the car during warm-ups and it flipped high in the air before coming to a landing on the backstretch. Decker was declared okay by safety officials at the track.


Austin Langenstein, driving one of the No. 43 Flach Modifieds was next to feel the pain of losing a car. Jessey Mueller and Ronnie Johnson both crashed their racers during the qualifying heats and Mike Mahaney lost a wheel on his ESS Sprinter during his heat. Bobby Varin rode the second turn wall on lap 17 of the 100-lap main event for Modifieds putting the Palmer No. 76 out of competition for the night. Winner of the 100-lap Super DIRTcar Series event was Tim Fuller of Edwards, NY, Danny Varin won the 30-lap ESS Sprint event. Reese and Scarlett Munson were at Fonda on Saturday enjoying the weather and watching their father, Jeremiah Munson race in the ESS Sprints. The girls had a great seat and ride being pushed by their Mom, Jessica.

In racing the off season is often called the “silly season” meaning drivers change rides, cars change sponsors, and teams dissolve. Close to home one team being affected by a change is the Pangman/Hoyenga team as driver Shaun Pangman told us on Saturday at Fonda, he was about to drive in his final event. Shaun said his family is very important to him and he wants to spend more time with them. Anyone that has raced knows much time is spent on upkeep of a car and although racers love the competition it’s also a lot of work when you’re off the track.

Fonda Speedway closed out its 2018 season this past weekend with two days of racing at the Montgomery County oval and as the racing began and ended rumors flew regarding the future of current promoter, Pete Demitrazsek. And just like that famous “telephone game” we played as kids every time we heard the rumor it changed. So at this point we choose to just wait and see. At Glen Ridge on Sunday, before the National Anthem a moment of silence was observed for three members of the racing family. Rather than try and explain it here we snapped this photo of the written words that were read by announcer Jay Severson prior to the singing of the National Anthem by flagger, Joe Kriss. As of Sunday night when we left Glen Ridge plans were that they will begin racing at the 4:00 pm time again next Sunday. Stay tuned to social media for any changes.

Racing appears to be at a turning point right now and we need all involved to put their heads together to preserve our sport.

This past Wednesday night we joined several other racing enthusiasts for a debut of sorts; Dirt Rush on the big screen at the O’zoner Drive In movie theatre in Broadalbin, N.   Y. It was something new for us and we salute Rob Hazer and Dave Whitney for thinking outside the box. We look forward to next year’s installment.