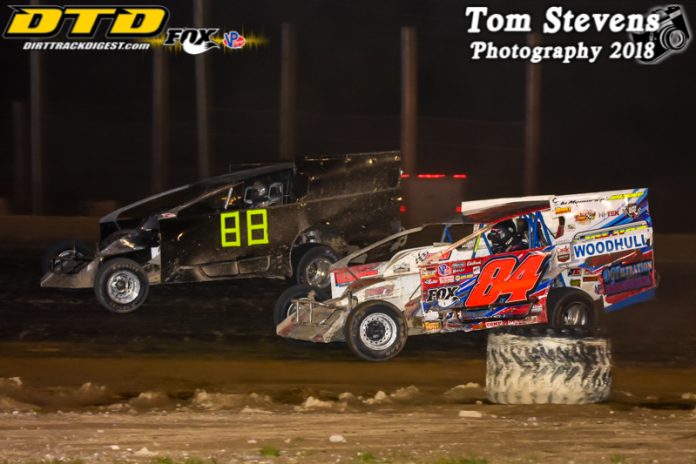 After a two month weather related delay, the Gladiator become a reality on Saturday night at the Genesee Speedway in Batavia, N.Y. The Gladiator brought a return of the big and small-block Modifieds to the Western New York oval. The one-third mile track is usually headlined by the Sportsman division.

The day was overcast with the sun peeking through the clouds on occasion while temperatures hovered in the mid-40s. Not the most idealistic day for racing, but the most important thing was that it didn’t rain.

Ryan Susice, making his first start at Genesee Speedway in over 10 years, dominated the 40-lap main-event. Susice wrestled the lead away from Todd Gordon before triumphing for the $2,000 payday in Wally Wade’s No. 84. It was only his second opportunity to pilot the former Gary Tomkins owned Bicknell and he made the most of it. He had raced at Genesee in the past, but had never won a feature. Now he’s a Gladiator champion.

“I actually had this car out once before at the Short Track Super Series race at Woodhull,” cited Susice. “We actually ran pretty good, but we got caught up in a wreck. The motor is my old motor so I know the motor. The car might not be the prettiest thing but it’s got all good pieces on it. It’s one of Tomkins’ old cars. Wally (Wade), when he bought the motor, said that maybe we could get a few races in this year. I’m glad we came back after the rain-out. The track came up pretty nice. I haven’t been here in 10 years racing myself. I never got a win. It was kind of cool to do that.”

Susice was running an entirely different combination than he’s used as the speedway ran outlaw series rules for the event meaning most drivers ran sail panels and American Racer Tires. That combination is not something that Susice has a lot of experience with.

“I might have six races on sail panels and American Racers,” commented Susice. “It takes a little to get used to, just all the different compound choices.  The right rear mandatory but the other three you had choices. We were contemplating what to do with our tires. We had to run a 48 (compound) on the right rear but we weren’t sure what to do with the left rear. We went a little harder compound and we had that long green flag run and it really came in.”

Susice put his car on the top of the speedway and never looked back. He found a good line through turns one and two that allowed him to get a run on the race long leader Gordon. He crossed him over coming off the second corner for the lead just before halfway. From there, that was it. He got into traffic, but no one was able to seriously challenge him for the spot.

“At the beginning I didn’t know how far out I could get,” said Susice. “I tried it in the heat and there really wasn’t anything out there. Down here off of two there was a little bit of the track that was curled up and if you could hit it right it would give you a really good run. A couple times I peeked on the outside but backed off. I figured if I was going to try it I was going to have to shoot across it. Luckily it stuck. He raced me clean. I race against him up at Merrittville. It’s cool for us to venture out and run well.”

Cartwright Comes from 13th to Second

Ron Cartwright Jr., had himself a pretty good day finishing second to Susice in the Gladiator. Cartwright started the feature from the 13th spot. Like Susice, the top was the preferred lane for him to move through the pack.

“That’s kind of how it played out,” stated Cartwright about his move to the top. “We were going wherever we had to go and that’s where we ended up. I figured it was going to dry out and get slippery so we changed the car around after heat and had it setup for late runs. It worked.”

Cartwright also took full advantage of a late restart to get by Gordon coming to the green flag. Susice and Gordon got together a bit opening the door for him to shoot down low around Gordon for second.

“They were playing bumper tag for first and second so I took advantage of it,” he said of the pass for second.

Gordon started on the outside of the front row with his Bicknell. He jumped right out to the lead at the start. He remained there until Susice wrestled it away from him. He ended up falling back to third, but still had a smile on his face afterwards.

“I think they were a little bit better,” he cited of Susice and Cartwright. “Those guys run hundreds of races a year compared to my one night a week. For what I got, a w16 in this, I’m happy with it. I have to thank Mat Williamson for the tires. That is where I got them from. He ran them at Freedom and then we got them.”

It was Gordon’s second time ever competing on American Racers. On this day that was critical as others tried to run Hoosiers and it just wasn’t effective. That helped him stay up front in the field to finish third.

“I’ve only ran American Racers one time, Mercer last year,” mentioned Gordon. “The car was junk down there. Here, I like this place. I like the small tracks. Ryan has twice the motor, twice the driving talent I got so I’m happy with third.”

Phil Vigneri III got his first taste of promoting on Saturday night as he was the one who pushed for the Gladiator at Genesee Speedway. He assisted in promoting the event. He didn’t have the best of days on the race track, but the crowd was good and everyone saw some great racing.

“It was fun tonight,” he said. “I have to think Jimmy Johnson and all the drivers that came out, the fans that bared the cold. I know a lot of people, drivers and fans, have been waiting for this race for a long time. It was good to fulfill that. I’ve been coming to this place my whole life. To be a part of bringing the big-blocks back here is special. We are so invested in Modified racing. We love it so much. That is the reason we did this, because we love this so much. I’m glad everything worked out.”

Vigneri’s goal is to bring the event back in 2019, albeit in warmer temperatures like the originally scheduled date back in August.

“I definitely thinks so,” he stated when asked about a return next year. “As long as the sponsorship comes back which was me and another guy I can see it coming back. We really wanted that August race. We couldn’t do it then. We had to go up against some big races with Brockville and King of the Can at Penn Can. Hopefully next year we do it a little earlier in the year and get some more guys out here.”

John Venuto looked to have a redraw position locked in during the heat race. He ended up getting over the banking in turns one and two dropping him to the back of the pack. He started 23rd in the feature before rallying for a sixth…

Jim Zimmerman took a wild flip in the feature after catching a yuke tire in turn one. He walked away unscathed…

Shannon Whaley, James Sweeting and others were involved in a multi-car crash early in the race. Whaley and Sweeting got the worst of it. Whaley had heavy front end damage while Sweeting messed up the rear of his No. 11J…