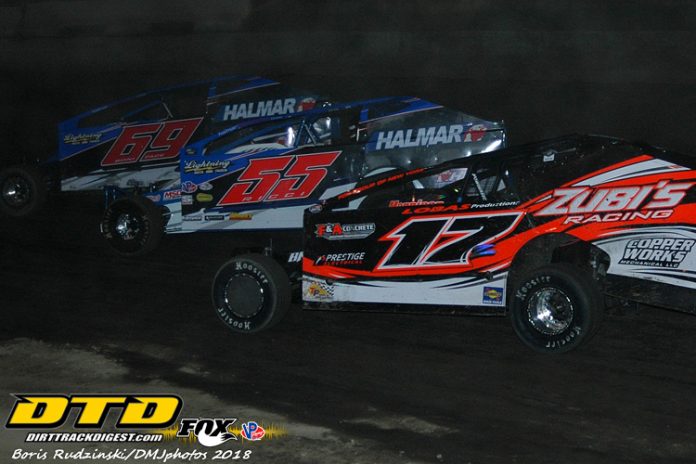 The big money continues to flow for Modfied teams on Saturday afternoon at the Orange County Fair Speedway with the running of the Eastern States 100 for the small-block Modifieds. The event pays a whopping $15,000 with a total purse of over $80,000.

This event should bring out some of the biggest stars in racing. They’ll all be hoping to get to victory lane in order to make them eligible for the bonus for winning the 100 and the 57th edition of the Eastern States 200 on Sunday. That could net them a hefty $65,000 paycheck for the weekend.

Before we get to Eastern States Weekend, DirtTrackDigest.com takes a look at the event with information that includes the format, purse, history, favorites and more.

The small-block feature will be 100-laps in distance. During the 100-lap feature caution laps will count from laps 50-90. In the event of a caution, the race will finish under green, white, checker. There will be double-file restarts for entire race. Lap cars will be sent to the rear should a caution come out. The Last 10 Laps must be green. The race may go extra distance depending on cautions.

Qualifying will begin with time trials. Time trial results will determine the top six locked in positions for the small-block Modified Eastern States 100. These top six cars will not be listed in a qualifying race. Everyone else will be lined up heads up in heat races based on their times.

Position numbers seven and eight are the only guaranteed starting spots. If the driver qualifies better than seventh or eighth, this position will become available. One of these positions belong to Anthony Perrego for his small-block win on Championship Night.

Heat races will be eight laps in distance with top qualifiers transferring to the Eastern States 100. Heat races will feature double-file restarts for all eight laps. The finishing order will line up spots eight through 26.

B-Main: The B-Main will pay $1,000 to the winner with spots seven through 26 earning $250. Not all drivers are guaranteed money if they make the main-event.

Stewart Friesen: It’s not difficult to put last year’s race winner in this category. Friesen is a two-time winner of the event and he comes in as the defending champion. You know he sees the big money on the line with a sweep for Friesen a very strong possibility. When Friesen pulls into the pits at Orange County, he has to be considered one of the favorites.

Brett Hearn: Hearn has won the small-block portion a record 16-times. That is simply impressive. I don’t think is much more that needs to be said. He leads all drivers in this category by a wide margin. Danny Johnson is second all-time with five career wins in the event. He hasn’t won the 100 since 2015, he’s due.

Anthony Perrego: Perrego was a five-time winner in the small-block ranks in 2018. He came up three points short at the conclusion of the season in the chase for the title. He has to be considered a favorite after having a career year at the Legendary House of Power. He’ll be a threat to both Friesen and Hearn for the win. His best finish all-time in the small-block event is a third in 2016.

Brian Krummel: Krummel was the surprise winner of the event in 2016 event and this year he was the small-block Modified champion at Orange County. He has yet to reach victory lane this year with the small-block so why not make the first win of the year a $15,000 one.

Craig Mitchell: Mitchell had a successful small-block season at Middletown finishing third in the overall point standings. Last year he finished sixth in the event. So combining Mitchell’s strong small-block season with his past quality efforts puts him in category of contender for Saturday afternoon’s event.

Matt Sheppard: As I stated in the Hard Clay Finale preview, Sheppard has never won at Orange County. How is that possible? He hasn’t run every small-block race the past few years, but he does have one podium finish in the event back in 2011. Eventually he has to come to come through like he has in recent years at other places he hasn’t had ton of success at.

Car Counts: There is a ton of cash on the line this weekend at Orange County. How many drivers will be vying for a chance at the huge payouts? Last year there were 63 (unofficially) cars entered for the small-block portion. With $15,000 up for grabs will there be more than that pit-side? I hope so.  This event should rival the car counts for Super DIRT Week.

Competition: I think the one thing that stinks about the Saturday portion of Eastern States is that there are numerous events held on the same Saturday in proximity that take away from the event. Delaware International Speedway, New Egypt Speedway and Outlaw Speedway all have higher paying Modified events against Orange County on Saturday night. I miss the old days where everyone converged on Middletown. I’m not knocking those other tracks. I get why they do what they do and understand it. It’s a business and these events make money. Hopefully every one of these events has large car counts and are profitable for the promoters. I’m just being selfish because I’ll be at Eastern States.