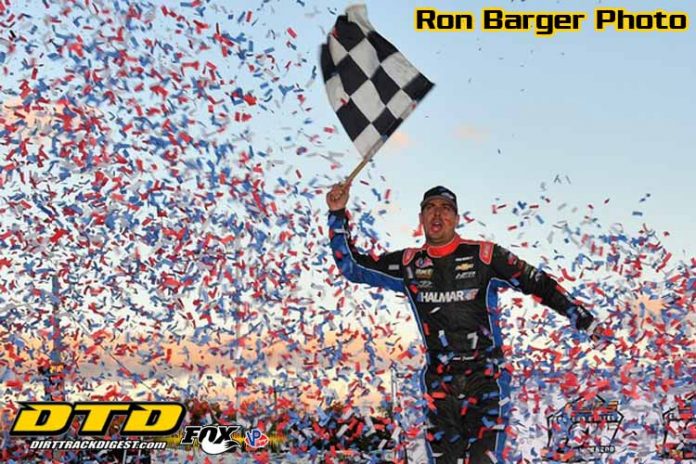 The weekend didn’t go as planned for Sprakers, N.Y., driver Stewart Friesen. On Saturday the multi-time winner of the small-block Modified portion of Eastern States appeared to win his third. That was taken away when he crossed the scales roughly 10 pounds light handing the win to Brett Hearn.

Friesen and the team returned Sunday posed as ever to win his second Eastern States 200 at the Orange County Fair Speedway. At the end of the 200-lap, $40,000 to win main-event, that’s exactly what they did.

“This is unbelievable,” stated Friesen. “Obviously this our biggest race and our most historical one now. To get another one and the strategy that goes into it. It’s back to the strategy and it might not be the best side-by-side on track racing, but for the race teams the preparation that goes into this is second to none. It’s topnotch. To finish out our Modified season with a win is awesome too.”

By virtue of not getting credited with the win, Friesen lost out on $25,000. He lost the $15,000 winner share and the $10,000 bonus for sweeping the weekend. The bonus has been put up the last several seasons, but it has yet to be claimed. Friesen took full responsibility for the mess up on Saturday with Sunday helping ease the sting a bit.

“A little bit,” commented Friesen when asked if Sunday made up for Saturday’s mistake. “I really wanted to get that win for C.G. (Morey). He stepped up when we had problems and put me in the seat in great equipment. I feel so bad that he’s in the hospital banged up right now. That was a nasty lick. I definitely would have liked to get that. We won the race, but we didn’t get the check. It’s a bummer. I take full responsibility for it. We put a bunch of lead on it, but we just didn’t get enough. All the cautions early it just kind of bit us.”

In Sunday’s race Friesen had issues as well. The team only made one pit stop in the feature which came on lap 32. There was speculation that the team didn’t get enough fuel in the car. They didn’t know if they were going to make it to the end of the race.

“We took gas on the first yellow after 30,” cited Friesen. “We got just enough. E-Mac (Eric Mack) called on the radio because he thought they only got a gallon in it. He wanted me to come back in 20 or 30 laps later. At that point we had already got in front of the guys we were racing back for the lead. We just had to stay out and roll the dice.”

Cautions would be the saving grace for the team as that allowed him to make it to the end.

“With only getting that much gas we needed a lot of cautions,” mentioned Friesen.  “Kevin Eyres did a great job keeping track of the caution laps. Traditionally the way this race plays out there is a lot of cautions. It went that way that again and we were able to log some laps and save some fuel.”

It was a gamble that paid off as Friesen took the win, but fuel wasn’t his only concern as he had to fight back by one of the other strongest cars in the field in Danny Johnson. Johnson got by Friesen on a restart. That forced Friesen to regroup and eventually muscle his way back by ‘The Doctor.’

“He left the door open,” Friesen stated of the winning pass. “I got my right front to his rub-rail in four. Obviously they told him I was down there because he started changing direction pretty quick. I filled the hole and that was it. I’ve been the other-side of that a couple times too. For a big race like this, he’s my favorite driver, but you got to race hard for the win. That’s what we were doing.”

The hard racing was what was needed to aid Friesen in scoring his second win, which was also the second win in the event for new Orange County Fair Speedway promoter and Friesen’s car owner Chris Larsen. Larsen quickly made his way at down to the frontstretch to be with his driver in victory lane. He was smiling from ear-to-ear.

“It’s actually more exciting than the first one was,” commented Larson. “It was something that we hoped for. It was a little bit more unexpected this time because of where we started. This kid can drive and you can never count him out from wherever he starts. He was just so smooth. I could feel it coming up in the booth. I was stoked.”

With the Eastern States triumph Friesen and Larsen will call it a year with their Modified program. They will now look to the end of the season with the NASCAR Camping World Truck Series. They went out on top in Modifieds, now the goal is to go out on top with a win in the trucks as well.