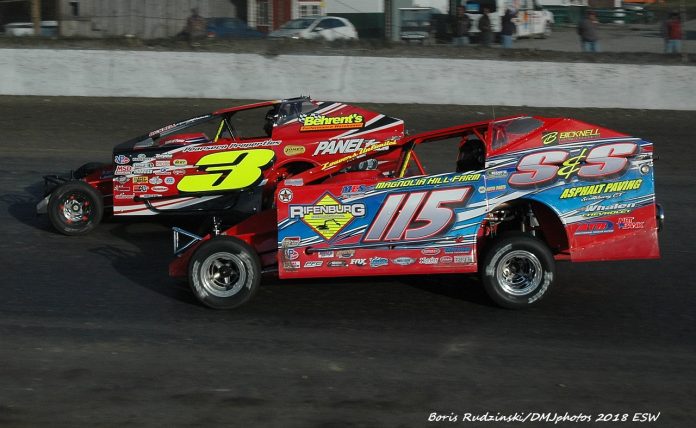 Mat Williamson’s talent has been well documented by those that those that see him race regularly on the western fringes of New York and Pennsylvania. The last couple of years his star has started to brighten in other parts of the Northeast.

After this season he’s becoming a household name.  Opportunities have started to come his way and the successes have continued. This year he earned a ride with Jeff Behrent’s racing team on the Short Track Super Series which opened even more doors.

“You always look up to the guys that had that opportunity; Stewart (Friesen), Matt (Sheppard), Danny (Johnson) and them guys that get put in cars for big races,” cited Williamson. “Back in the day we’d go to Charlotte and just be excited to be there. Now we are going there to win. That is cool too. Jeff was really the first one to say, ‘hey, I want you to drive my car.’ I have to thank him for that. It got my name out there on the Short Track Super Series.”

The success he’s had in the Behrent’s car and on his own this season also earned him a ride for the World Finals at the Dirt Track at Charlotte in two weeks. Last year he picked up a win in the Friday night portion of the program. Now he’ll be driving for one of the most well-known teams in the Northeast.

“We are going to do that with the Petruska’s,” commented Williamson. “I’m super excited. They always have good stuff. We’ve been talking to them a little bit this weekend and they seem to be excited too. That’s what you need going into the big races. We’ll see what we can do down there. Hopefully it will be the same as last year.”

“It’s pretty cool,” commented Williamson after finishing fifth. “Jeff (Behrent) and these guys have won it a couple times. They gave me a good car all week. I missed it a little bit in time trials. I kept telling them that we got a good car and we got to stick it out. I’ll get better myself. I appreciate them doing that for me. It showed at the end of the week.”

As stated, Williamson wasn’t as good as he wanted to be on Friday afternoon in Modified qualifying. He has limited experience at Orange County. On Thursday night he competed with American Racer Tires which gave him a much different feel than the Hoosier Tires he competed on the rest of the weekend. It took him some time to adjust. He was still 16th quickest of the 62 cars that took time, but the competitor in him wasn’t happy with that.

“It’s tough,” stated Williamson. “I said to Jeff on Friday that we run around for 50 laps on American Racer and you can run into the corner so much harder that it kind of hurt me in time trials. The first practice session I almost drove over the cushion and then in time trials I was babying it on the bottom. I was scared to do that again. You would rather have a mediocre lap than a terrible lap. You pick the happy medium there.”

The 27-year-old believed he had an even better car than the fifth place finish he scored. The restarts just didn’t fall the way that he needed them too. The good thing though was that he survived the day.

“I think we were a little bit better than where we finished,” said Williamson. “The car was a third place car, but all-in-all it was a good weekend. We brought it home in one piece. There was a lot of carnage today. It was nice to avoid all that. We passed a few cars. At the end day we got a good momentum swing going into Charlotte at the end of the year and to start next year with Jeff on the Short Track Super Series.”

These opportunities are bringing Williamson closer and closer to his ultimate goal. A few more big wins and he may just reach it, but for now he had to make the six hour trip home to get to work on Monday morning.