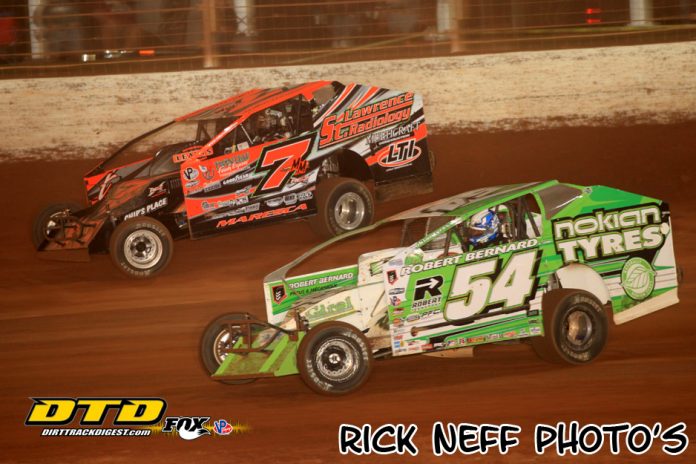 Big-block Modified driver Steve Bernard made the trek from St. Paul Abbotsford, Que., to Charlotte for the World Finals presented by Can-Am.

However, as feature racing was set to begin on Friday night Bernard’s No. 54 was sitting idly unattended in his pit stall as it would not be seeing any further action this weekend.

Bernard has qualified for both features, but he is ride searching for Friday with another car en route from Quebec for Saturday.

Bernard’s spokesperson told DTD, “In the second qualifier last night there was an engine noise. It was a little noise in the front of the engine and we thought it was a spring or valve. We checked it out and there was oil on a spark plug. Looking further there was oil on the headers and when we put a compression test on it a cylinder showed zero compression.”

Continuing he said, “We are qualified for both races, but we didn’t have a car. We asked around the pits to see if anyone would lend us one. J.F. Coriveau’s car is on its way and should get here around 4 o’clock tomorrow morning. Since then we have to thank Carey Terrence and Mike Maresca as they are allowing us to start one Carey’s back up cars tonight if the other car hadn’t arrived.”

So luckily, Bernard will get to take the green on Friday night.