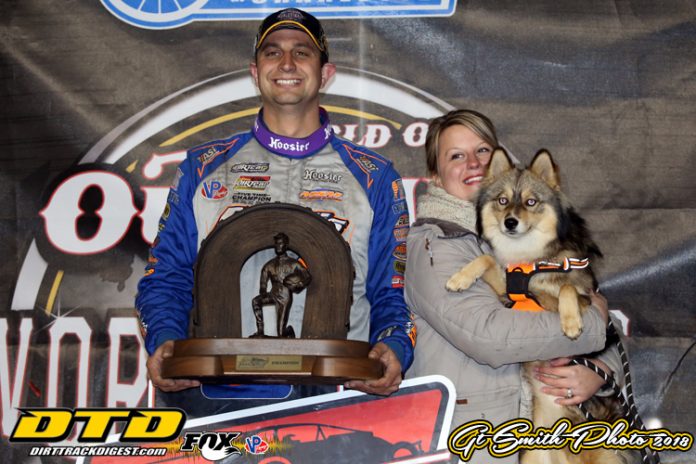 Unlike the last two years, Matt Sheppard didn’t leave The Tar Heel State after the 2018 edition of the World Finals with a Super DIRTcar Series win. He finished third and then second in the finale. That was good enough for him to head home with the same thing he’s left with the last four seasons, the Super DIRTcar Series championship.

Sheppard now trails only Brett Hearn on the all-time list. Hearn has eight career series titles to Sheppard’s seven. This year’s championship put Sheppard all by himself in the second spot on the list. He was tied with the legendary Jack Johnson coming into the season. “That’s a pretty big number,” said Sheppard on Saturday night from the pit area at The Dirt Track at Charlotte. “It’s big. I think it is a testament to my team and the team’s I’ve driven for. I kind of have a core group of guys, some of them have been with me for all seven, and some have been here for at least four. When you can keep a group of guys like that around, good sponsors, great race cars, great engines and everyone has a good working relationship … that’s the formula.”

Last season Sheppard’s Bicknell No. 9s was the dominant car on tour. He won 12 series events while on his way to the championship. This year that wasn’t the case. Sheppard reached just five wins on the series.

The team was forced to scratch and claw after flat tires put them behind in nearly a third of the series events. At the end year, Sheppard and company were still able to overcome the adversity to sit at the top of the points at the conclusion of the World Finals.

“It’s gratifying, but man there was a lot of stupid stuff that happened this year,” stated Sheppard. “I think we had a very good car most of the year this year. Not of all of our finishes show how good we were at a lot of these races. Obviously we weren’t going to rival last year, but with the same amount of luck we had last year we would have been pretty darn close.

“I’m real proud of everyone on this team. We fought through a lot of adversity and kept plugging along, plugging along and brought a really fast race car down here.”

Sheppard came into the World Finals with a 40 point advantage over his closest challenger Erick Rudolph. He qualified well for the events earning a redraw spot for both the Friday and Saturday programs after heat racing action on Thursday night. Even with all that in place, he wasn’t happy with how the car felt. So the team headed to Max McLaughlin’s shop Friday morning and swapped engines. It was a gutsy decision, but Sheppard had faith in the team and the equipment. He made the right choice.

“I didn’t have to, but I just felt like this motor was stronger,” he stated of his other C.C. Performance powerplant. “Confidence in the crew, confidence in engine program and knowing what we got. This motor came down in the back of my truck. It is Tommy Cullen’s motor.

“After Thursday night I said, ‘you know, I’m pretty sure Tommy’s motor runs better than the motor that is in this car.’ We went over to McLaughlin’s shop Friday morning and swapped motors out. We came right out today green, no warm-ups, nothing and it ran better than the other one. It is a really strong piece.”

When it was all over, Sheppard didn’t get the wins he was craving, but unlike his home tracks he scored the championship as everything worked out. The flat tire bug tried to bite him again.  He was leading and had a left rear tire come off the bead.  It tried to take a good finish away from him, but like he’d done all season, the team never gave up.

He eventually rebounded to finish on the podium not once, but twice while on his way to winning the most important title of the year as it comes with a $40,000 payday.  That title also meant he got to share the stage at the end of the night with World of Outlaw Sprint Car Champion Donny Schatz and World of Outlaw Late Model Champion Mike Marlar. “We didn’t win either race, but probably had a legitimate shot of winning both of them and that’s all you can ask for,” commented Sheppard. “It was crunch time coming down here and we brought a fast race car. We would have liked to win both of them. It was nice to come down here and show speed again and show we didn’t lose the magic we had down here the last two years. That is six straight races down here that we haven’t been worse than third. We had two wins two years ago, a first and a second last year, and we damn well could have won them both here this weekend. It’s definitely been good to us.”

Sheppard went on to sum up his season and what his expectations are going forward. If he’s able to meet those expectations we may just be talking about a tie at the top of the championship winner’s list.

“We had a lot of bad luck this season,” he said. “I think we could have a lot better season than we did. It is still a testament, the stuff we had to overcome this year and to still be the champion. I expect big things again next year.”