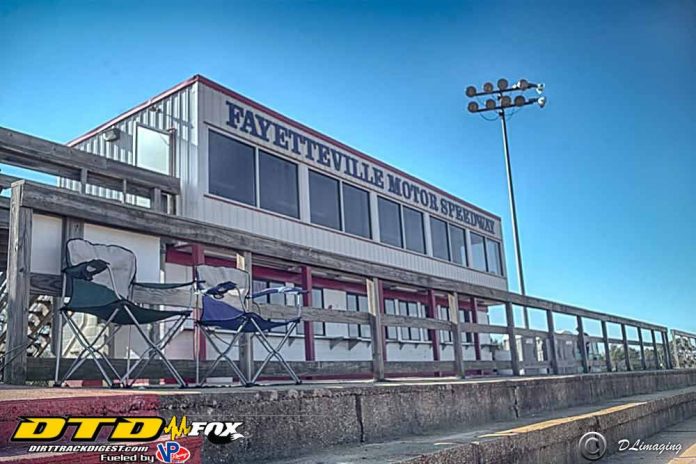 Fayetteville Motor Speedway recently wound down the 50th season of operation with pride in achieving one of the most successful and ambitious seasons in its history.

As I was traveling on the I-95, I decided to make a stop at the famed Fayetteville Speedway and finally see the track that I have always noticed while traveling by but never having the time to stop.

The track was built back in 1968 and is 4/10 of a mile with the distinctive reddish clay that surfaces many of the southern tracks. You would never now it is 50-years-old as the facility is in grand shape and can host well over 5,000 race fans.

I dropped into the main office where I met Denah Long. She and her husband, Jim Long Jr., have been running the track for the past four years. Denah explained that, “Jim and I took over the operations as the previous promoter had left and the track was scheduled to close, as no one was interested in keeping the track alive, so we stepped up to plate.

“We then went to work to improve things along, expanding the classes and schedule with some special events throughout that first season.”

With Jim’s promotional experience, along with the groundwork set by the previous promotion team, Jim has continued to move the racing program forward over the past few years.

Denah explained. “This year, being the 50th season of racing at the track, we created several special events over the year to bring some excitement in celebrating the half a century of racing at the speedway.” The first and most poignant event was the World of Outlaws Craftsman® Late Model Series which invaded Fayetteville Motor Speedway on May 11-12. Jimmy Owens took home the win along with the biggest payout in the history of the Speedway — $25,000.

On June 23 the Fuel Racing Series come to town for the 40 Lap Summer Sizzler. Willie Milliken captured the win and the $3,000 in prize money.

They scheduled for the Lucas Oil Late Models series Wayne Gray Sr. Memorial on July 5, worth $10,000 dollars in prize money on the line; however, the event was postponed until September due to weather.

The next big event, which was not on this season’s schedule was hurricane Florence rolling into town. Florence disrupted the entire area, causing widespread flooding throughout the region. Jim and track officials quickly came to the conclusion that this one event would derail the rest of the season’s schedule. They had to compromise to get the final few races in this year.

The team at the track then made the hard decision to cancel this year’s Lucas Oil Late Models series, and focus on the last big event of the year — the Cash Money 100 with $10,000 up for grabs. Unfortunately, it too had to be rescheduled, as they had to deal with Hurricane Michael.

In the end, The Cash Money 100 was rescheduled to a one-day event on Saturday, October 27, allowing Ben Watkins to take home the cash.

Denah Long explained. “We did our best to put on some great shows for the fans to celebrate the 50th year of racing here but we definitely had to work at it because of hurricanes Florence and Michael coming through our counties.”

On a sad note, Denah went on to explain, “Then, late in the season, long time track worker Billy McFayden past away suddenly, which was a great shock to both Jim and myself along with the rest of the crew here at the track. We affectingly called him “the dirt doctor” as he worked tirelessly on preparing the track over the week to make sure the racers and fans would have a good show.”

It was defiantly a great decision on my part to finally stop in and see what this track was all about and to meet Denah Long.

Jim and Denah Long are already preparing for next year’s season and have once again secured The World of Outlaws Craftsman® Late Model Series, scheduled to return on May 10-11 for another $25,000-to-win show. There will also be some feature events throughout the summer. If you’re in the Fayetteville, North Carolina, area or just want to drive down for one the events, I am sure you will be as impressed as I was with this grand Speedway.