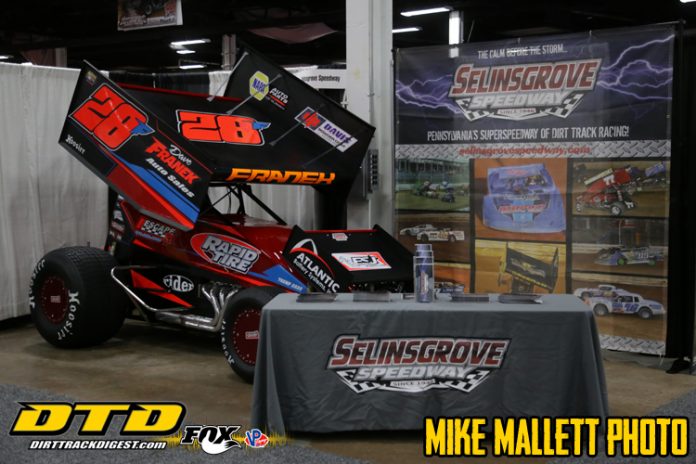 Although the 2018 season was a success for Wantage, N.J., driver Davie Franek, he wanted more. A mid-season bout with Lyme disease forced him to cut back taking away any opportunity to hit the road as he recovered. He still managed to finish the season with the Selinsgrove Speedway track title.

In 2019, Franek has ambitious plans as he wants to hit the road. He ran just 30 races last seasons, while this year’s schedule includes nearly double that.

“We lost a lot of races because of the Lyme disease,” mentioned Franek. “We’ve been piecing this year’s schedule together. We got like 60 races on it right now. As long as our motors hold together we’ll be able to do that.”

Franek has no plans of committing to any particular track or sanctioning body. He’s going to run an open schedule unless something happens to change his mind.


“We are going to bounce around a bit this year,” he said. “As of right now we have no commitments. We’ll see. We are going to start in Florida on Tuesday and see how that goes.”

By virtue of keeping his schedule open, he’s not committing to running weekly at the Selinsgrove Speedway in defense of his track title, but he didn’t rule it out completely.

“We are going to see how the first couple of races go,” stated Franek. “I love racing Selinsgrove. The past few years have been good to us up there. We’ve made some money out of the place winning features and things like that. We might want to go someplace different, but we’ll see what happens.”

Franek again has a 410 powerplant at his disposal which the team plans to utilize during the 2019 season on a limited basis. His focus remains on the 360 program. That will continue to be his bread and butter.

“We are going to race some of the All-Star shows,” said Franek. “Lebanon Valley, Middletown, probably Grandview and some Speedweek shows with the 410. As long as the money is there. The 360 stuff we have our program so good right now that it makes sense to do it.

“It’s tough for us to go to a 410 race or go away for a weekend with one car and one motor. It’s tough to do. You have to have your ducks in a row if you are going to commit. I enjoy racing the 360 stuff. I like going upstate (New York) and racing with the guys that I race with up there. It’s a good time.”

Whether he’s competing in a 360 or a 410, Franek expects to have success as he’s proved in the past. He’s always a threat, especially now that he’s back to full health.

This & That: Legends Honored – DTD Exclusive