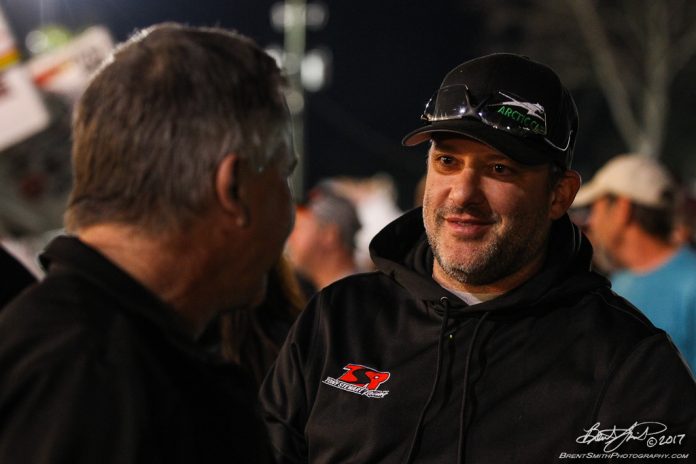 OCALA, FL – It looked like Tony Stewart was a man among men on Saturday night at Bubba’s Raceway Park.  Stewart led all 30 laps in route to winning the finale of the three events of the Ollies Bargain Outlet All-Star Circuit of Champions weekend visit.

Now, when you have the names like Lucas Wolfe, Paul McMahan, Mark Smith and Tim Shaffer finishing behind you, man among men seems too strong of words. But, there was just something about Stewart’s 30 tours around Bubba’s.

His car seemed faster, the driver drove with what seemed to be more confidence than the others, his darting in and out of lapped cars was more fluent…there was just something about the No. 14 on this night. Stewart has shown all of the those traits before and for years and with many different forms of racing. On Saturday night we were reminded that Stewart can be, well….Tony Stewart.

Shortly afterwards you can tell he’s happy with his speed right out of the box in 2019 and with a 410 sprint car. “Two nights ago we were fast also, we led so many laps but not to pull it off was tough,” he said.  “Jimmy (Carr, Tony’s long-time sprint car crew chief) wouldn’t even look at me for five minutes after and you hate to disappoint them right out of the box. By morning I was happy where we finished ‘cause you knew you were fast.”

He continued on the weekend, “When you do finish one off like we did tonight and makes up for it. We were good tonight, we were fast tonight and that was good,” said the Columbus, Ind native. “I knew the car was fast by itself, if I was to lose it, it would be in lapped traffic. It’s such a momentum track and even as small as it is you need to look ahead so you know what line you want to take. Tonight it all worked out and I can be aggressive in getting around the slower cars.”

Now, even with all these words above talking about how Stewart made this night his playground, there still was a restart with six to go where it added to the story. Coming down for the green, the sprint was a little sideways and for Wolfe it was “his” chance to pull this one out.

“I changed my line just a little bit and I knew I didn’t get as good of a jump. You don’t want to take off at the same spot all the time so that’s why I tried something different,” as he continued about the late race drama.  “I got to the stand I heard him (Wolfe) on the outside of me but I felt if I got into one okay I would be able to hold him off.”

Hold him off he did, the last few laps saw him pull away again and when the checkers flew Stewart etched career win four with the club he now owns.

In 1970, Bud Miller formed the All-Star Circuit of Champions. Miller suspended operations after a few years however and the All-Stars laid dormant until 1980 when Bert Emick took the reins. Bert put his heart and sole into the club until Guy Webb became the man in charge midway through 2002. Webb had a long run until 2015 with circumstances that many of you already know.

Enter Stewart and quite frankly, he saved the All-Stars history. The All-Stars were in trouble and with a future that was so in doubt you didn’t even know if the 35 plus year old club would even come out of 2015. Stewart banded the troops back together, gave it stability whether financial or just in reputation.

Race teams came back to the All-Stars in season long support, sponsorship was growing and in this day and age it was almost with a snap of a finger. In mere months, the organization’s future look like it would resemble the fate of the Titanic to the USS Constitution (yea, I Googled that, I ain’t that smart).

“It was hard as nobody really knew what to expect the first year but I think we all gained a little confidence in each passing year,”  Tony reflecting back on his business side.  “We were sitting here the other night smiling as we had 32 cars in the pits. The first year I think we had 18 and we had to beg anybody that had a car, we begged 360 teams to help us out.

“But now to have the strength of the field we have today makes me smile. Even though I am here as a competitor for the three days, to sit here and see the caliber of the teams that support these events has made me proud, “ Tony continued.  “We wanted it to grow and with the strength in the teams you put on better quality shows and we have good relationships to the tracks we started with. Maintaining relationships and starting new ones is very important to us.”

Stewart went on to say,  “We have been branching out to new areas that we haven’t done in the past that has been a fun part of this Series but also provided a challenge.  There are so many places that want us but we have to be mindful on where we go. This still is a Series where our guys have Monday through Friday jobs. When we do have road trips that take their weekdays away we have to plan to not have too many of them where we take all their vacation days.

Tony wanted to emphasize, “We love to have a World of Outlaws type of schedule but we have members that we don’t want to forget where we came from and why where we are.”

Shortly after talking to this kid, Tony got his Sprint Car back to the pit area to greet many well wishers with a smile… Well, why not, he’s at an All-Star sprint car race. Oh, and he won.