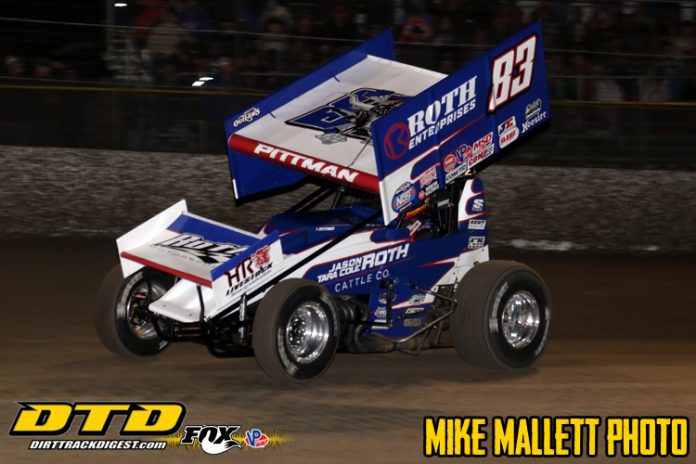 At the conclusion of the 2018 race season Daryn Pittman wasn’t sure what was going to happen in the future. The veteran Sprint Car driver’s tenure at Kasey Kahne Racing was coming to a close.  Luckily, that wasn’t the end of the story for Pittman. The Owasso, Okla., driver was picked up weeks later as the next driver of the Roth Motorsports No. 83.

Of all the driver changes in the off-season, so far Roth and Pittman have been by far the most successful. The tandem has yet to be off the podium in four nights of racing action at Volusia Speedway Park as part of the DIRTcar Nationals. Pittman finished third on opening night, second on Thursday before scoring back-to-back wins as he searches for another big gator at the conclusion of the racing action on Sunday as the DIRTcar Nationals Champion.

“I just got to pinch myself,” stated Pittman afterwards. “You come down here and you hope to do this, but you realize there are 30 other teams that worked just as hard as we did over the winter time that had the same expectations. It’s difficult. Every win is hard. I’ve been fortunate enough to do this for a long time.”

Pittman has now earned 83 career wins with the most prestigious Sprint Car organization in the country. It’s something that wasn’t lost on him after barely beating out 2019 Chili Bowl winner Christopher Bell in Saturday main-event.

“I don’t know if this is 82 or 83, but that is a staggering number to look back where I came from and how I got here,” mentioned Pittman. “I was just a kid dreaming of being able to do this. I can’t say enough about this Dennis Roth team and the opportunity he’s given me to drive and to do some things a little bit different. Man I’m having a lot of fun.”

Sometimes in racing change is a good thing, and for Pittman moving to Roth has allowed him to have more say with his race cars. So far he feels like that is paying off as he and crew chief Brent Ventura have worked really well together to kick of the season.

“I just have a lot more say in what’s going on in the decisions that are made on the car,” cited Pittman. “That is not to say that this is all me. Brent has been doing a great job. He suggested a lot of things. I wasn’t sure about his knowledge with as young as he is and he hasn’t been out here on the road before, but I’ve been nothing but impressed with the stuff he’s done and suggested. Everything he has done so far has really been in the right direction.”

He continued, “On the same token, our car is fast. I come up with a lot stuff in my head that I hope works, but I have a lot of really good friends that are pretty talented as well that I rely on. Trust me, I’m on the phone all day long explaining my nights on what I’m feeling. I’m trying to weed through information from some people who are a lot smarter than me to make a decision here at the track.”

Those decisions so far have paid off as on Saturday night the battle with Bell was epic. Bell got out in front from his pole starting position to dominate the first half of the race. Pittman was steady riding in the top three before moving into second in traffic on lap 11. At that point he hung with Bell before passing him for the lead on lap 19. Bell went back by a lap later. Pittman went back to the top spot on lap 26, Bell regained on 27 before Pittman finished the job on lap 28 in turns one and two.

“I felt like the longer the race went on I had a better car,” commented Pittman. “I just made a lot of mistakes. I got the lead, missed the bottom and he got back by me. I just wasn’t great on the bottom of turns three and four. I couldn’t make that work. I just made the middle work down there all the way to the exit and changed my line. It got a lot better. As I driver I felt like once I got the lead that should have been the end of it because I felt like my car was better. Once I gave it back I felt like I might be in trouble.”

Luckily for Pittman he was able to make it to the end without issue.

In finale he’ll look to close out the title.  He’s elated with how things have gone so far in Florida, but he’s not getting too excited about the start. Even though he’s been on fire in Florida, there is still nearly 90 races to go.

“I know it’s a long road to hoe and it’s a long season,” mentioned Pittman. “Florida doesn’t necessarily mean anything. It doesn’t mean you are going to be good the rest of the year. We are just going to enjoy it while we got it and we’ll just try to keep riding this momentum as long as we can.”

Christopher Bell scored his second consecutive podium finish by coming home in second. Bell wasn’t sure after the 30-lap feature what he could have done better to beat out Pittman. He felt like he did everything right during the main.

Although not a winner, Bell is happy to have the speed and the solid efforts at Volusia. It’s a place that hasn’t always been kind to him and wasn’t earlier in the week when he some motor issues. The team has righted the ship the last two nights.

Parker Price-Miller was the fastest car of the night and the only driver to break the 13 second barrier in time trials when he turned a lap of 12.849…

Ian Madsen saw his night go up in smoke during the heat race. The Australian native slowed and stopped on the frontstretch with smoke billowing from under the hood. He qualified through the B-Main to make the feature…

Mother Nature attempted to wash out the program with the UMP Modifieds on the speedway during their heat race events. The track crew was able to get the surface back in time to run the final Modified heat, the dash, Last Chance Showdown and the World of Outlaw Sprint Car A-Main. A light mist started falling during the feature before the skies opened up as Pittman celebrated in Victory Lane…

It wasn’t a good night for Pennsylvania native drivers as Danny Dietrich withdrew from the event after time trials, Brent Marks and Jacob Allen used provisionals to make the show and Brock Zearfoss struggled all night with various mechanical issues while making it in through the B-Main. Logan Schuchart was the highest finishing Pa. native finishing in eighth after starting 19th…

For the second consecutive night the A-Main ran caution free.