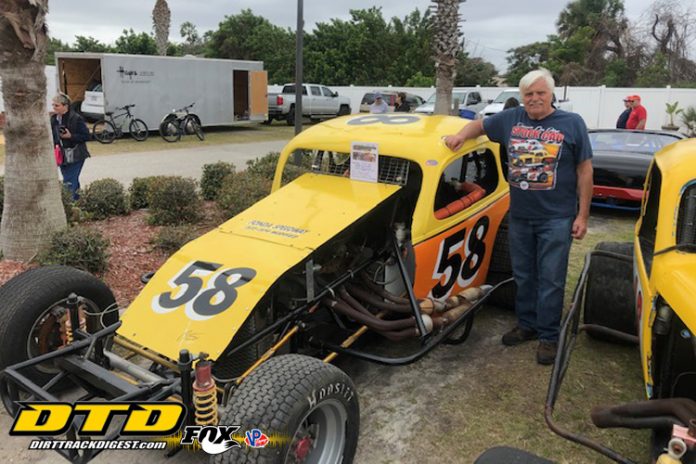 As we said in an earlier column we try to attend as many of the off track activities as we can during Speed Weeks and Saturday it was off to the 8th annual Legend’s Beach Parade in Ponce Inlet. We always like to see and meet the many vintage racer enthusiast that congregate in the North Turn Restaurant parking lot where they stage for the parade that follows the historic beach racing course on Route A1A and the beach where hundreds of racers from all over the country gathered back in the day.

Frank Blanchard of Fort Hunter, N.Y. raced at Fonda Speedway in the 1970’s and 80’s and today he is a collector of vintage race cars ( he currently has 11). He belongs to several vintage clubs in his home state of New York including Classics on Dirt Stock Car Club which is a spinoff of the Mid-State Club after they split. Frank races with the Mohawk Valley Vintage Dirt Modifieds at local tracks throughout the Capital District, driving the Lazzaro Gremlin, and when he’s in Florida at his winter home in Zephyrhills he races in and round Central Florida. We ran into him at the annual Legends Beach Parade on Saturday. It was Frank’s first time at this event which has racers and attendees reminiscing with stories of races they have won and watched. One of Frank’s racing stories, and he has many, was of an older gentleman that called him one day saying he had something he thought he would be interested in and to meet him at Thunder Mountain Speedway near Binghamton the next time the vintage cars raced there. Frank did and was surprised when the elderly gentleman opened his trunk reveling the Chevy 6 cylinder, Blue Flame, built with three two barrel alcohol carburetors that had been in one of Buzzie Reutimann’s earlier rides. As they talked Frank realized that the gentleman was willing to give him the motor as long as he promised to do something with it. So Frank ended up with the motor and hung onto it for awhile until one day he got to thinking that maybe he should tell Buzzie Reutimann about it, as we said earlier, Frank has a winter home in Zephyrhills, Florida and that is the home of Reutimann racing. When Frank went back to Florida he went to Buzzie’s shop and told him about the engine. It was timely because Reutimann was in the process of building a vintage car replica of one of his former No. 00 race cars. When Frank mentioned to Buzzie what engine he had acquired, and Frank thought Buzzie had built it, Buzzie said, it was actually built by his father, Emil.

As people began to gather around Frank started telling another of his racing stories, how he beat Bobby Allison at Fonda. According to Frank, it was early 1980’s and Bobby Allison was brought to Fonda by then promoter, Ralph Compani for a Miller beer promotion. Allison was driving the Miller sponsored No. 22 NASCAR Winston Cup car and a Modified was painted up to match his Cup car. When race day arrived Frank and some of his crew went to Fonda as spectators. At the track they were told that 28 cars would start the race, Frank had one of his crew count the cars in the pits. There were 27 so Frank quickly went home and got his car with Saturday night’s dirt still on it and brought it to the track. With all cars qualifying all Frank had to do was start the heat race. He finished last but was still in the feature. During the feature there was a large wreck that took out about 1/4 of the field, including the No. 22 of Allison. Frank was also involved. When in the pits he realized Allison was out of the race, he told his crew, whatever you do, put it back together. The wrapped a chain around the frontend, Frank went back out and finished the race. The record books show, he finished ahead of Bobby Allison and so today, Frank can boast, “I beat Bobby Allison at Fonda.”

Frank is just one of the many vintage racers that keep the history of auto racing alive through their stories and their cars at local tracks and car shows. Sunday we ventured down Route A1A once again this time to attend the “Beach Racing Days” event at the Ponce Inlet Lighthouse. The weather was threatening early on and by the time we left it had started to rain so the turnout was moderate but still well attended. We did get to talk with one of the early beach racers, Brownie King of Johnson City, TN who drove the No. 32 Chevrolet convertible owned by Jesse Potter of Daytona Beach, FL. Brownie also raced at the newly constructed Daytona International Speedway in 1959 when it debuted west of the city of Daytona Beach. Again we got to hear one of those historic stories. Brownie said that when he took his car to Daytona International he was asked by NASCAR founder, Bill France, Sr. to cut the top from the car to run in the special convertible event and then after that event he bolted the top back on to run the regular events of the day. There are plenty of stories like Brownie’s and as historians we like to record whatever we can, whenever we can.

The Fonda Speedway Street Stocks just got a little better this past week with the announcement that Trackside Body Works of Fonda will sponsor the division and the Street Stock competitors will be racing for $200 to win each event in the 2019 season.
News out of North Florida and the 602 Winter Nationals that Bobby Hackel, IV was the winner on the first night of competition. Hackel was second on night two.

We head to the DIRTcar Nationals this week and will give you a run down of the action in next week’s column. Until then please send all news and/or comments to biittig@yahoo.com.