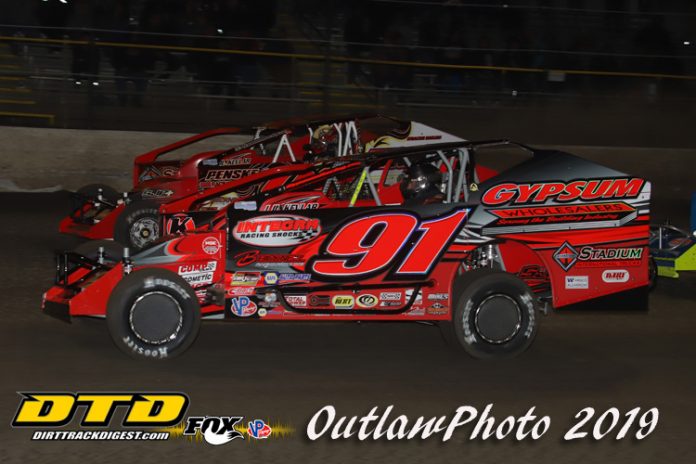 At the conclusion of the 2015 season Billy Decker had to change his racing plans for the first time in nearly 10 years as he was released from LJL Racing. He eventually joined forces with Mike Payne Racing and the team had some successes during their three year tenure together that ended at the conclusion of 2018. That put Decker on the market once again.

Enter John Wight and LJL Racing. In what was a seen as surprise move by the team, Decker was given the opportunity to return. For Decker, it’s a homecoming of sorts.  He’s back in his comfort zone working with long-time crew-chief Scott Jeffery and a team where he won nearly everything that is possible to win.

The combination made it’s debut on Wednesday night as part of the DIRTcar Nationals at Volusia Speedway Park and promptly went out and got the job done. Decker scored his third career victory at the facility and his first since all the way back in 2005.

When asked if he was good to be back at LJL Racing, Decker simply quipped, “It sure is.”

Decker started on the pole of the 30-lap feature with teammate Larry Wight on the outside. Wight got the initial jump on him but it was Decker who had the upper hand in the early go. Decker managed to wrestle the lead back from Wight in the opening stages.

“I don’t think I was good as I needed to be, but when I hit right I thought I had a really good race car,” cited Decker of his Bicknell. “It was a pretty fine line for me and I missed it a lot of times.”

On lap 13 a restart setup a battle with defending Super DIRTcar Series Champion Matt Sheppard. Sheppard looked to sneak to the inside of Decker in turns three and four when the pair made contact causing Sheppard to spin to a stop.

“I got over Matt’s nose once getting into three trying to get to the bottom,” commented Decker. “I never saw him. I got into his right front obviously and he got turned around.”

Decker remained the leader from that point forward but he faced plenty of challenges. First from a charging Billy Pauch on the outside before Wight re-entered the fray in the final stages of the race. At numerous points over the closing laps Wight tried to stick his nose under Decker for the lead.

“On one lap with five to go I missed it in three and I thought I saw him sneak up underneath me,” said Decker. “I got the left rear back down in the traction and then got back away from him.”

Decker’s final challenge came in final two circuits as traffic came into play. The Unadilla, N.Y., driver had to enter through the middle of turns one and two to go around a slower car causing him to lose all the momentum he had. He got back in down in front of lapped car as quickly as he could.

“I knew it was going to be close because that last lap I tried to come down in front of a lapped car and missed getting the left rear on bottom a little bit,” mentioned Decker.  “I had to get my left rear back in the traction as quick as I could.”

At the end it was Decker holding off all challengers to open the 2019 season on a high note.