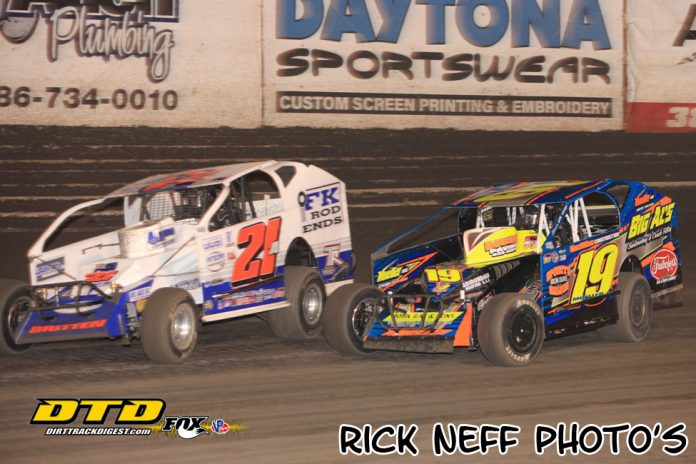 Thursday night’s main-event came down to a confrontation between two of Modified racing’s biggest stars in Matt Sheppard and Stewart Friesen. They garnered most of the spotlight at the conclusion of the night, but Peter Britten and Jessey Mueller each had moments of their own during the 30-lap feature that deserved attention.

Britten started from the pole, led a few laps early before finishing in the third position. Like Britten, Mueller got his shot as the leader as well as he led four laps before giving way to Friesen.  He ended up falling back to finish in sixth. It was a quality night for both campaigners.

Britten struggled on Wednesday with a 12th place effort. The team made plenty of changes to get his Troyer car prepared for Thursday’s program. Those changes seemed to help him find more speed.

“We made a few changes from last night,” commented the Australian native. “Last night we picked up a bad push in the feature. We made sure that wasn’t going to happen tonight. It’s such a fine balance. You need to be able to turn, but you need all the drive you can too. It’s tough to figure out. I think tonight we found a little bit better balance and the track was a little different, that suited us. We’ve got to keep plugging away.”

Britten surrendered the lead early to Mueller, then Friesen blasted by him on the outside to put him third. Sheppard was next as he went by him on the bottom. He eventually found his rhythm, got back by Mueller and settled for a spot on the podium behind Sheppard and Friesen.

“I was surprised with Matt,” Britten said of the race with Sheppard and Friesen. “He was good. As soon as he got by me initially I knew he was going to be tough to beat. Stew was good, but I thought I had something for him there. Them two ended up getting away from me a bit. I feel like we finished where we deserved to. Technically we backed up, but whenever you can finish third to Sheppard and Friesen you know you are doing something half right.”

The most unexpected foray at the front of the field was Mueller. He’s had his fair share of wins in New York, but hasn’t had the best of luck in the Sunshine State. After Thursday night he showed that he can hang with the best as he came out of the night with a sixth place finish.

“Honestly a top five was my goal tonight,” commented Mueller after starting second. “I knew I had a bunch of tigers behind me nipping at my butt. I’m pretty happy with what we did. I think last night we qualified third also, started 12th and missed the setup. We got it tuned up today, tried different shocks and we were better from get go. I ended up drawing good and that put us in a good situation.”

Mueller’s run was definitely a confidence booster for the driver originally from Olmstedville, N.Y. He was racing with the likes of Sheppard, Friesen and Britten rather than mid-pack. He’s starting to come into his own.

“It’s an awesome feeling,” mentioned Mueller when asked about racing up front. “I was one of them guys in the back for a couple years there. I’ve paid my dues and kept racing with them. I don’t think I’m Matt or Stew yet, that’s for sure, but I think I can get up there and run with them.”

For the second night in a row, 39 cars were in the pits for the Modifieds. Sheppard was fastest overall in time trials with a lap of a 17.540. Heat race wins went to Sheppard, Will Thomas, Friesen and Danny Johnson. Kyle Coffey and Demetrios Drellos won the Last Chance Showdowns …

The first caution of heat race action came on lap two of the final heat as Yan Bussiere and Ryan Godown got hooked together going into turn one. They required multiple tow trucks to be pulled apart. Godown continued after using a bungee cord to hold back a tire rub on the left rear. Bussiere also continued …

Unfortunately later in the night Danny Johnson became the first flip victim of the week. Johnson caught the cushion in turn three at the start of the feature causing his car to go over multiple times. Luckily he wasn’t injured in the crash…

Billy Decker leads the DIRTcar Nationals points 116 to 114 over Sheppard. Anthony Perrego has two fourth place finishes which is good enough for 108 points. Larry Wight sits fourth at 104 with Billy Pauch completing the top five with 100.