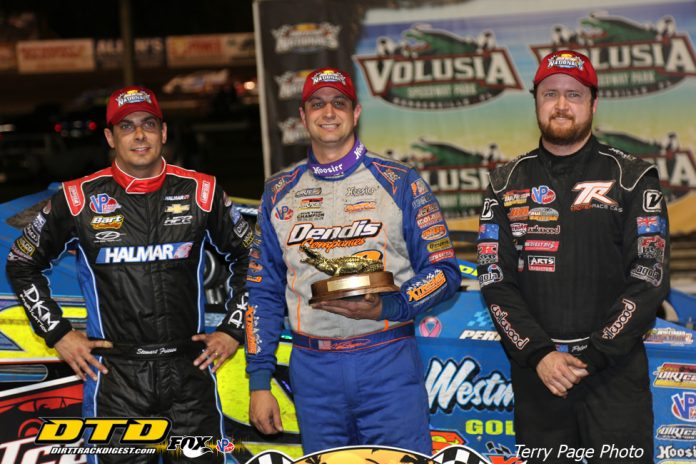 As good as Wednesday night’s Super DIRTcar Series main-event for the Modifieds was at the DIRTcar Nationals at Volusia Speedway Park, Thursday night’s feature raised the bar. It was a battle of the best as Matt Sheppard and Stewart Friesen put on a show.  They duked it out for the lead and the win throughout the course of the 30-lap nightcap. At the end, it was Sheppard who this time got the upper hand on Friesen to earn his eighth career victory at the ‘World’s Fastest Half-Mile.’

Sheppard went off from the fourth position while Friesen was one spot behind him in fifth. At the green, Sheppard made a daring three-wide move down the backstretch and was the leader heading into turn three. That pass would negated as Danny Johnson flipped several times to bring out the red before a lap could be scored.

Sheppard’s next restart wasn’t nearly as good as Peter Britten raced out to the early advantage with Jessey Mueller in line behind him. Then it was Sheppard and Friesen battling for a podium position, a spot which Friesen was able to grab first. From there Friesen continued marching forward with Sheppard in pursuit.

Friesen eventually moved his way to the lead on lap eight while Sheppard got to second on lap 12. One lap later it was Sheppard blasting by Friesen on the bottom of the speedway with Friesen riding high on the cushion in slower traffic.

“The track was so racey,” mentioned Sheppard. “We were all kind of moving around there as we were running the middle, the top and the bottom. I honestly I don’t even remember where I got the lead, the bottom off of two maybe. I think Stewie got kind of messed up in lapped traffic and he moved around trying to find a new line. I just caught him by surprise.”

Even with the lead, the race was far from over for Sheppard and Friesen. Traffic eventually forced Sheppard to migrate his way to the top with Friesen heading to the bottom. He was able to make up some ground on inside rail while Sheppard held his own in a lane he doesn’t traditionally run.

“I got forced up there by the lapped cars and we passed so many of them up there,” stated Sheppard about running the top. “The race had progressed to the point where I really didn’t know where to be anymore. I figured I had a little bit of a rhythm going up there.  I was going to stay there until someone showed me a nose or got by me, one or the other.”

Sheppard knew over the final five laps he had to be perfect, one mistake and it was going to be Friesen getting the gator. In typical Sheppard fashion, he was flawless with his Bicknell No. 9s while on his way to the win.

“I knew after following him for half the race how good he was,” Sheppard said of Friesen after the race. “I knew if I got out in front I couldn’t make any mistakes or he would be right there to go back by me. Thankfully we didn’t mess up, we kept the wheels on her, held on and here we are.”

Friesen thus settled for the runner-up position. It wasn’t what he wanted, but it was an improvement over their Wednesday night’s effort that saw him place 15th in the final rundown. The team elected to use an entirely different car on Thursday night as they looked to pick up speed.

“This car was just a little better tonight,” cited Friesen of his DKM mount. “The other car was really good early, but we lost the handle when it was slick. There is stuff we can work through with that. Overall I’m happy with the DKM cars right now and the Billy the Kid Engine package we have.”

At times, Friesen was as good or even better than Sheppard in the feature. He was able to close in on him on several instances during the final stages of the race. Traffic was definitely an issue and as previously stated, Sheppard just didn’t make a mistake to give him a chance to get back to the lead.

“The 9s (Sheppard) had us covered tonight,” mentioned Friesen. “We were good on the top and bottom. When we got the lead I should have set up on the top. Looking back at how the race turned out last night I didn’t think top would be that good. Matt went back by us up there and I didn’t expect that. We got back up there, ran with him and almost got him back. If it wasn’t for traffic I think we might have had something for him. It was a good race either way.”

Friesen will take Friday night off as he focuses his attention on the NASCAR Truck Series opener at Daytona International Speedway on Friday night.  Sheppard will be back in action as he hopes to gain his second gator trophy of the week.