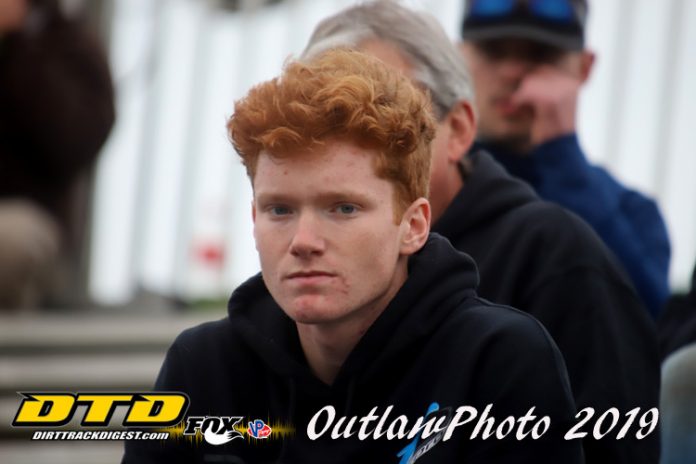 A few months back it was announced that Jack Lehner was ready to take his racing career to another level as he elected to become a platinum status driver with the Super DIRTcar Series. It will be the young drivers first time taking his show on the road.

As part of that commitment the team elected to head south to compete at the DIRTcar Nationals for the first time. So far he’s been able to make both shows, which for any young driver is important. He’s still hoping for a bit better results than the 19th and 20th he’s earned so far. “The goal was to make the show every night,” he said. “We’ve been hoping to do a little better in the feature. We’ve been showing some good speed early on. I thought we had a pretty good car tonight, but the five car got into us on the start and gave us a flat tire.  We never got a chance to change it because it went green to checkered. I’m really happy with the way this Teo Pro Car has been. My guys have been working their butts off. Hopefully we can string together a pretty good night soon here.”

Volusia Speedway Park is a tough place to tame. It’s unlike most New York tracks as you carry much more speed while be forced to keep your momentum up. Lehner is looking to show improvement on Friday night. His goal is now to try and make it into the top ten.

“To be able to get two top tens would be awesome and I’d say that is probably the goal now,” stated Lehner. “If we could get a top five that would be better, but if we could get a gator that would be even better. We are just going to do the best we can, be as fast as we can and see where we end up.”

For the Saratoga Springs, N.Y., driver, Volusia is just the first of many new tracks he’ll look to have success at in 2019. Like Volusia, he’s kept expectations in check. He wants to be competitive with the best in the business, but knows that’s going to be a challenge.

“I just want to be competitive at the races that we show up to,” commented Lehner. “I want to be up front, running in the top ten and getting some top fives. If we could finish up near the top of the points that would be awesome. It’s a big commitment to run the tour. It’s a lot of money so we have to make it worth it.”

Lehner’s quest for a top ten continues on Friday night as the team returns to the DIRTcar Nationals for the third of four nights for the Super DIRTcar Series big-block Modifieds.