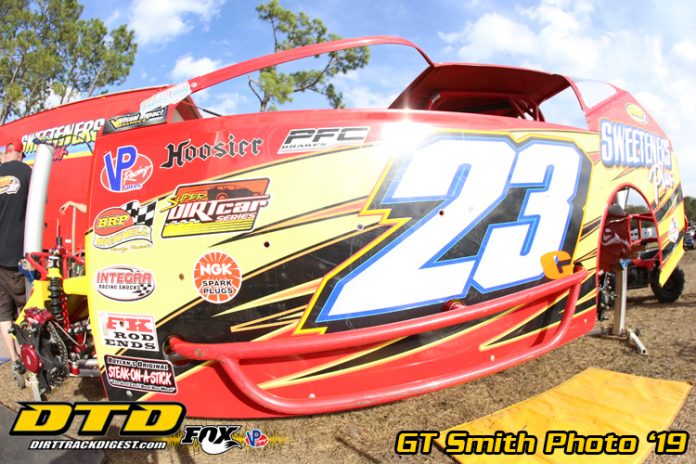 Like several other drivers in the pit area, Kyle Coffey is making his first ever trip to the DIRTcar Nationals as a competitor. It’s definitely been a learning experience for the nearly 22-year-old driver out of Caledonia, N.Y. Volusia Speedway Park is unlike anything in New York as it’s a high speed, up on the wheel racing every time you hit the track.

“It’s a big learning experience,” stated Coffey. “It’s a track I’ve been to a lot of times but never been able to race at. I think it’s going pretty well so far. Having to drive hard in the heats and consi has helped me in the feature when it’s time to get going.”

He was open about what he’s had to learn to be improve each night. It’s all about keeping up momentum while hitting your marks. One minor mistake at Volusia can cost you several positions.

“It’s one of them places, especially early on in the night, it’s wide-open and you aren’t lifting much except to set the car in,” commented Coffey. “It’s definitely something you got to get used to doing every lap. You have to keep your momentum to keep it going and rolling. You’ve got to be able to stick your car where you need to. Sometimes it’s not going to plant where you want it, but you got to keep your momentum up because that’s how you get the car bent back to the direction you need to get going. It’s a learning experience. It’s nothing we can’t handle.” So far Coffey has made the program the first three nights. He grabbed the final transfer spot on the opening night in the Last Chance Showdown before earning the win in his respective LCS races the last two nights. He’s done it in impressive fashion by making late charges to get to the front.

“It’s been a tough one to get in the show every night,” mentioned Coffey. “We’ve made all three races. That was the expectation right off the bat for me. I was happy the first night we got in with the last transfer spot, then to win the consi the last two nights was pretty cool. Definitely something on the bucket list to make the show every night.”

Coffey has one more feature he’s hoping to make on Saturday night for the finale at the DIRTcar Nationals for the big-block Modifieds.

“Hopefully we can lock in through a heat race tonight and do some racing up front with them guys,” stated Coffey.