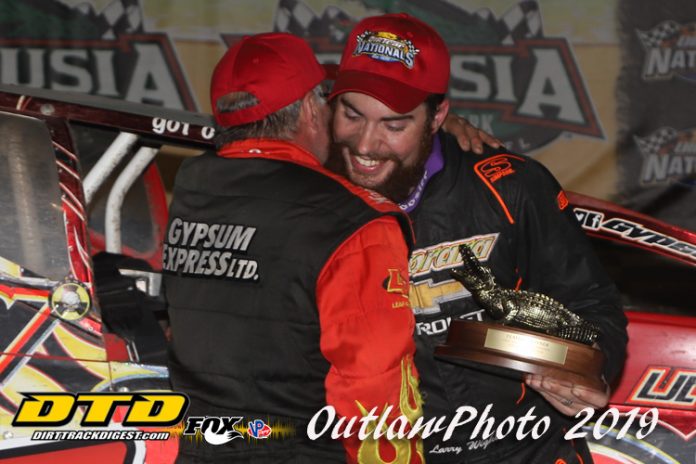 Larry Wight has always been strong at Volusia Speedway Park. He’s had success and run extremely consistent at the fast, hammer-down facility. It fits his style.

In 2015 he left Florida with the coveted big gator trophy as the DIRTcar Nationals. Even with all that, there was something missing from the Florida resume. A feature win.

He remedied that situation on Friday night as he drove by good friend Pat Ward as well as Thursday night winner Matt Sheppard to finally add his name to the all-time wins list in the Sunshine State.

Wight was good earlier in the week. On this night the team made all the right adjustments to get him where he needed to be. They didn’t change a lot on his No. 99L, but what they did change proved to be the difference.

“We just changed the car up a little bit,” commented Wight. “We did a lot of work today with it just changing and checking stuff seeing if we had something wrong with it and we found a couple little things. A couple of little things add up.  Dave Reedy came out tonight and let me use his shock dyno. We were able to change up a couple of shocks and it really helped the car rotate up on the cushion.”

Wight was able to wrestle the lead away from his teammate Pat Ward who has looked strong all week long as well. Ward took the lead from Sheppard on lap 13 before Wight went by him on the high-side on lap 21.

“That’s awesome,” Wight said of the battle with Ward. “It’s the stuff I dreamed of when I was a little kid and now its real life. We get to do it on a weekly basis back home, but to come all the way down here and be doing the same thing is really cool. It’s really nice to know we can run one and two at home and come down here and know that we’re top three cars.”

When Matt Sheppard gets the lead that tends to mean that the race is over. Unfortunately on Friday night that wasn’t the case for the Waterloo, N.Y., pilot. As good as Wight was, Sheppard was off a bit on the setup in his No. 9s. He’s typically good when the track slicks off. That hasn’t been the case in Florida.

“I was tight the first night and last night I actually got the car turning a little too good,” mentioned Sheppard. “I was tight again tonight. We’ve kinda been back and forth, but it seems like the track was a lot blacker tonight and a lot blacker the first night. I don’t know why we’re pushing worse when it’s black. It’s usually the other way around. Usually when there’s grip in the track you’re pushing but we seem to get tighter the blacker the track gets.”

Sheppard attempted to adjust his line during the 30-lap feature event. It was good enough to get him back around Ward for second late in the event. That’s where his march back to the front would end.

“I think I just found a line that my car seemed to like,” cited Sheppard. “I tried to move to the bottom on one restart and I was getting passed on both sides. I kind of moved up off the bottom a bit, but ran lower on the track and didn’t really change anything. I found a line where the thing steered for a couple of laps and was able to get back to second. I actually thought we were catching Larry there at the end but ran out of time.”

Ward Has Best Run of Week

Pat Ward’s strong DIRTcar Nationals continued as he had his best showing of the week on Friday in finishing third. The car was close to where he wants it to be. Ward admitted that he did make a couple mistakes which cost him a shot at the win.

“Just tweak it a little bit more,” stated Ward of his Bicknell. “We’ve been getting closer and closer. This is the first night we’ve gotten in the draw which helped a ton.  Boy we were good through the middle part of that race. We could drive right through the middle of the track, but once that caution came out I was still battling Larry and I think I overdrove it a bit trying to keep up with him and left the bottom open for Matt to get back by me.”

Like Wight, Ward had fun racing with good friend for the win.

“Nothing better than that really in my book,” commented Ward. “He’s probably become one of the best there is in the business. I like to feel that I helped him get there a little bit, but yea, we are best friends and when I don’t win I want him to.”

Two less cars competed in the Friday night portion of the DIRTcar Nationals. Stewart Friesen was off for NASCAR duty while Cass Bennett did not enter the event bringing the total to 37…

DIRTcar Nationals point leader coming into the night Billy Decker detonated a motor during the feature. That has dropped him to eighth in the point standings…

Mat Williamson has struggled to get things going this week as he embarks on a new deal with Buzz Chew Racing. Williamson went to a backup car on Friday night. He started on the pole but faded back to 10th…

The hunt for the big gator trophy comes down to a 50-lap, $5,000 to win main-event on Saturday night.