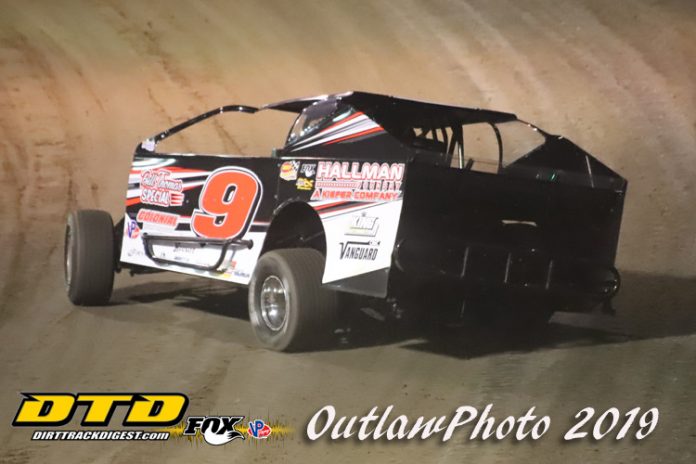 Will Thomas has been one of the most talked about drivers at the 2019 edition of the DIRTcar Nationals for the Super DIRTcar Series big-block Modifieds. Thomas is the great unknown. He’s a former asphalt Late Model driver from Western Pennsylvania who has found himself setting quick times in his group and winning heat races. He’s held his own with the best in the business, and that has people asking, “Who is Will Thomas?”

Thomas, 43, from Sharpsville, Pa., is a well-accomplished racer in nearly every division he’s competed in. In an asphalt Late Model he won the Race of Champions at Oswego Speedway and the U.S. Open at Lancaster National Speedway. From there he shifted his focus to dirt racing as he lives only miles from Sharon Speedway. At Sharon he won track championships in the Late Models (two) as well as the E-Mod division (one). When those divisions went away he made the move to the big-bock Modifieds.

Since moving to the big-blocks three years ago he hasn’t been able to race anywhere full time. He’s been busy with his personal life. That was part of the reason the team decided to come south. He wanted to get some seat team while enjoying the company of his friends.

“This is basically our second year,” mentioned Thomas. “I haven’t run full time. I ran a few races last year and ran a few races year before. We won a small-block at the end of the year. For us to come down here, with my best buddies, we are down in Florida with my friends having fun. My uncle Denny, Ryan and Tony, my crewman Matt (former Sweeteners crew member), and I can’t say enough Charlie Rudolph. He often doesn’t have a lot to say, but he’s one of the nicest guy in the pit area. Only one missing is my wife who is home pregnant and I miss her not being here.”

By his estimation he’s made just around 20 starts in the division. That has allowed him to keep things in perspective as the time trial and heat results have been good, but in feature action he’s struggled. He’s finished 19th, 18th, 14th and a tough 22nd on the final night in the main-events.

“The beginning of our nights are good,” said Thomas. “The other night I drove from third to 18th and I was ready to make a noose to hang myself off the liftgate. I was on the way here the following day and it said that Stewart Friesen made his 1,000th big-block start, and that was about 20 for me. My biggest thing is I haven’t raced much. Just getting here our goal was to get a bunch of seat time, try to learn and get better.”

“When it slicks off it’s hard for me to figure out,” cited Thomas. “Early on I can charge real hard. You still have to run and drive hard in the slick, but it’s figuring out how hard to drive. I’m driving in too hard and sliding out of the bottom. I don’t feel ultra-comfortable. You look at Larry Wight and Stewart Friesen and those guys zinging the top out there. I think those guys are something. For me, I’ve got to be able to move around the race track more and figure out where I need to be.”

Even with those struggles in the finales, Thomas has kept his mind in the right place. He knows that the drivers he is competing against are the best that big-block Modified racing has to offer. He’s just happy he’s been competitive at times.

Thomas was also very complimentary of the drivers he’s racing against. They’ve all been very open to talking to him and offering assistance when asked. He’s quickly earned a great respect for them and the talent they have.

“There are a lot of great guys that race these things, from Stewart Friesen, Erick Rudolph and his father,” stated Thomas. “They are a father son team, great guys and a huge help to us. You go up and talk to Matt Sheppard, you talk to Tim Fuller, and there are a lot of unbelievable race car drivers in these cars. These guys aren’t stuck up guys, they are down to earth racers. I’d love nothing more than to get out and race with guys of this talent, but it’s not going to happen consistently.”

Since he can’t make regular treks to New York to compete with the Super DIRTcar Series once action resumes up north, Thomas plans to compete closer to his home base in Western Pennsylvania. Mostly on Saturday nights.

“We’ll try to run as much as can,” he said. “Sharon only has three races for us this year. Mercer supposedly is running big-blocks every week. We’ll try to do that as much as we can. We have a w16 (engine) car as well. If we can we’d like to get to some small-block races.”

Perhaps his limited schedule prevented Will Thomas from becoming a household name in Modified racing coming into the 2019 DIRTcar Nationals at the Volusia Speedway Park, but anyone at the track or watching at home certainly now knows his name. For Thomas that’s an honor, but at the end of the day for him it’s all about having fun.