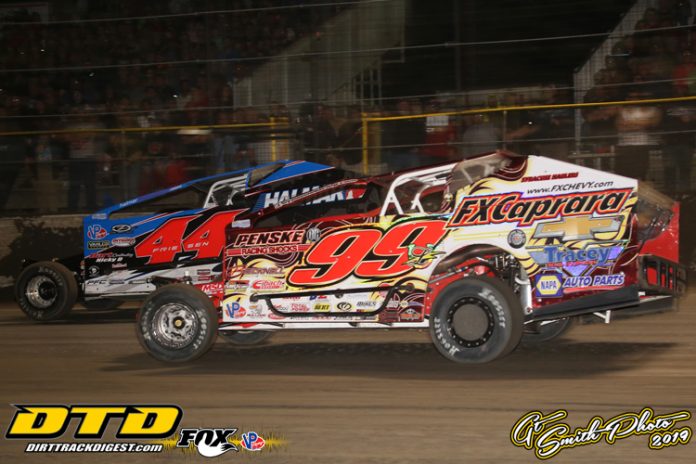 Wight came into the final night’s program trailing Matt Sheppard by seven points. He made up a point in his heat race before his second place finish in the feature solidified his second championship.

“I think both years it has come down to me and Matt that I’ve won it,” said Wight. “To take it from a guy like him it speaks bounds for us that this year we are going to be coming for him in the series.”

While on his way to the championship Wight also broke through for his first Volusia Speedway Park victory. It’s something he’s been trying to get for several years.

“That was pretty awesome,” stated Wight when asked about finally winning. “We’ve been fighting tooth and nail to get one of them. We’ve had a lot of seconds here so to finally get that one off our back was good. We had a shot at getting another one tonight, but came up a little bit short. We had a phenomenal week.”

Wight indeed had a shot another win in Volusia in the finale. He actually took the lead on a late restart from Friesen only to have the pass called off due to a caution. Friesen didn’t give him a second opportunity.

“I knew I didn’t have a car that could necessarily beat him,” mentioned Wight. “I knew if I could hit one good lap and have him slip up a little bit we could get ahead of him. We could have crossed each other a couple times and maybe I would have been the one ahead at the line.”

Friesen was fortunate that the caution came out saving him from having to hold off Wight. The ensuing restart came single-file saving Friesen from having Wight next to him. He got a great jump at the green pulling away from the field for his seventh win at Volusia and one that paid the most of the week at $5,000.

“Man, we’ve been second here a lot the last couple years,” said Friesen. “We’ve been burned at the end so it was good to finally get one back.”

Friesen wasn’t sure what to do on the last double-file restart. He elected to start on the outside of Wight which cost him the lead in turns one and two. He came back with his own slider in turns three and four when the yellow came out.

“I just couldn’t get going on the top or on the bottom so I figured I’d roll the top and be able to get in the middle and at least be side-by-side to block the slide job,” commented Friesen. “Then I got into turn one and shoved the nose a little bit. I got a good run down the back, he moved up to the cushion and I got under him. It was going to be a hell of a dogfight the last lap, but the caution came out.”