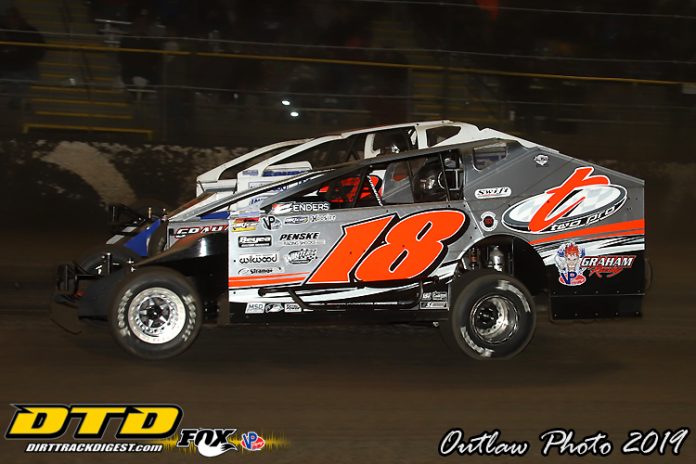 Hitting the Sunshine State in February for the DIRTcar Nationals is a luxury for Modified teams that make the trek as it’s a chance to get out and do some racing before the weather in the Northeast breaks. Some drivers use it for testing purposes, others as a vacation while others use it as a time to get acclimated to a new team. That was the case this year for both Anthony Perrego and Billy Decker.

Perrego, of Montgomery, N.Y., made his debut aboard the No. 18 Ray Graham Racing mount. It wasn’t Perrego’s first foray to Florida, but his first with this team. The new combination quickly got to speed with Perrego getting two fourth place finishes and two sixth place efforts.  That was good enough for third overall in the final point standings for the DIRTcar Nationals.

“We got some momentum to move on here with the series and that’s definitely important,” mentioned Perrego. “If we came down here and struggled we’d be scratching our heads and Ray would be wondering if he made the wrong decision. We ran good all week.”

Perrego’s Teo seemed to work better once the track slicked off. Early in the night when the Volusia Speedway Park surface was lightening quick he struggled a bit. As the track changed, he improved including on the final night where he marched from 21st to sixth.

“When the track still has some moisture in it takes some kahuna’s to get up on the outside to run like that,” cited Perrego. “We ran 13th or 14th the whole race then the bottom started coming around to our liking. We could turn a little better and we were able to pick them off one-by-one at the end.”

Unlike Perrego, Billy Decker was competing with a new team, but one that he had a prior decade long relationship. During the DIRTcar Nationals the team looked like they had never parted ways as they started the week with a win with a total of three top five efforts in four races. Had he not had motor issues one night he more than likely would have been able to challenge for a DIRTcar Nationals title with his teammate Larry Wight.

“It sure is,” when asked about if it’s good to be back at LJL Racing. “Obviously we had four top tens and probably four top fives if we don’t have issues last night. Either way it was four solid runs.”

Decker knows that he’s back in a good spot and he knows that he has to perform. Coming out of the gate strong at Volusia was a good way to kick the relationship back off.

“I think it was big,” mentioned Decker. “I needed to perform a little bit better. These guys obviously are coming off winning the biggest race of the year so they were riding high anyhow. I just want to be competitive.”