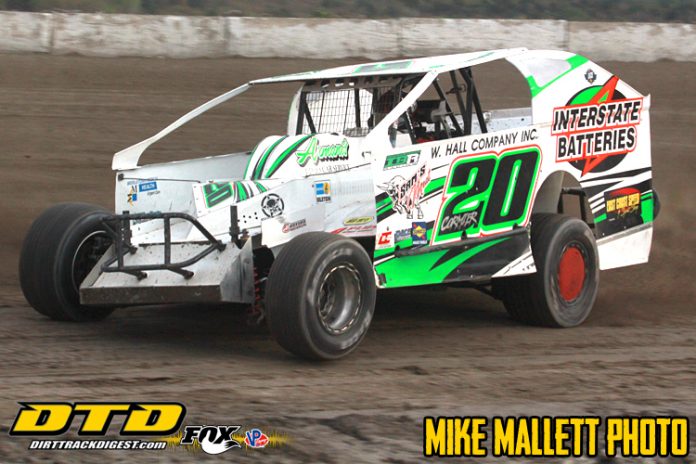 I am going to tell you about my recent trip to the North Florida Speedway in Lake City, Florida for the 602 Sportsman Winter Nationals. It was a new track for me so that is always a treat plus a chance to get away for a few days with a chance to watch a new division in that state. A note here, the track has run a couple of races with these cars earlier in the prior year as they are trying to grow this division. Jeff Lawrence who races up North during the Summer but has a place in New Smyrna, Florida has been bending the ear of North Florida promoter Phil Guadagno to try to get this off the ground.

I am going to tell you some about the facility and my thoughts of the races and some opinions on what might improve it going forward and I hope they do it again. I will also tell you how the local drivers did that run at my two home tracks of Afton Motorsports Park and the Thunder Mountain Speedway. Let’s say we get started.

The races were scheduled for Friday February 8 through Sunday February 10 with Thursday the 7th used as a practice night. The Friday and Saturday shows were going to be the visiting 602 Crate Sportsman division with a Florida Late Model Series scheduled with heats and features. On the card Friday was heat races for their Street Stocks, Thunder Cars and Box Stocks. On Saturday those three divisions would run a feature only and the two main divisions ran heats and features again with more money on the line for them. Sunday was a two thousand dollar to win event for the 602 Sportsman in a 35-lap feature go. The other division on this night became a combination of the other divisions with just nine cars so everyone agreed to combine.

The track is a large 3/8-mile semi-banked track and it was in very good shape with very little dust and multi-grooved even though it seemed most of the drivers wanted to race on the inside. I sort of tried to figure what I could liken it to and thought maybe Ransomville without the outside moats. Grandstands are a little old with some older towers. The sound system is great as you could hear quite well even with the cars at speed. Parking lot is flat with ample parking space but could see it filling fast if there ever was a big traveling series in. Pit parking is very good as well with many grassy spots for working on your car and quite spacious.

Car counts for the 602 Crate Sportsman stood steady with 27 on Friday 28 on Saturday and 27 on Sunday. Drivers were there from six states, New York, Pennsylvania, Maryland, Delaware, Ohio and Florida. The Florida Late Model Series had just 11 and 12 cars on Friday and Saturday respectively. I thought was a little low but according to a few folks I talked to that was about right. The other divisions were low in counts to but they did put on good racing in my opinion.

The Crates were brought down to the speedway in a combined effort of the GRIT Racing Series and the BEI Lightning Series and for the first time I considered the event a success. There were a few glitches as would be expected and I believe it can grow into a nice little winter getaway for us up here in the North and a very good start of the season for the track in the future. Crowd wise was adequate on Friday and Saturday but Sunday was not good at all. The racing in the Crates which is what I went to see was okay with some over aggressive driving on occasion especially in the early going of the events. As Nick Stark GRIT Series partner and the voice of the series said in all their races there is no record of anyone winning on lap number one. I will let the professional writers give you all the results as I am just going to tell you about the ones I mentioned above after my ideas for the future events there.

The event for the Crates was contested on Hoosier Tires as is the track tire of the speedway. GRIT has a series up here in the North for both the Hoosiers and of the American Racer Tire and I would like to see it used as either or at this race as it would open it up too many other competitors. I believe it does need to stay a non-point race as I did hear rumblings that it might be a point race next year which I believe would hurt not only this show but their series in general. I know they were doing tech and again I heard some rumblings of different things being done and I don’t want to get into that because I didn’t follow it up there, but I will say they all need to stick together in the future. Here is one that I am sure would be better for all involved and that is to run Thursday-Saturday and leaving Sunday for a rain date. One last thing is I would like to see another division that would bring some more cars as a second division and I will say they were discussing just that. Remember folks these are all my opinions so it should not reflect on GRIT, BEI Lightning, North Florida Speedway or here at Dirt Track Digest. One last thing before moving on to the rest of my column I want to thank the speedway for all their courtesies extended to me and also say how friendly everyone was.

Now on to the drivers from my area and how they did. Faring the best was the Montgomery, N.Y. wheel twister Bobby Flood driving his Evergreen Fuels sponsored ride number (91). Opening night he brought the car home for a sixth-place finish and came back on Saturday to grab the victory holding off all challengers in the many attempts to thwart is effort. Sunday found an early flat and the team decided to park it instead of coming through the pack and get caught up in something after the two good nights. The Afton Motorsports Park (A.M.P.) chauffeur is looking to return to improve upon his seventh place in the final points last year to contend for the championship. Flood is also looking to compete weekly at the Orange County Fair Speedway in Middletown, N.Y., Flood does plan on racing again shortly as plans are to travel to the opening weekend at the Georgetown Speedway for a South Region event of the Short Track Super Series on Friday March 15 and Saturday the 16th.

Next up we will take a look at (A.M.P.) track champion for the 2018 season and that is the driver out of Otisville, N.Y. Corey Cormier aboard his potent Interstate Batteries sponsored number (20). Night one he finished 12th and night two got beat around and finished 12th again. The final night Cormier was contending for the win throughout the event and late in the race got caught up in a crash for a disappointing 18th place finish. The upcoming season Cormier is looking to defend his championship performance at (A.M.P.). Saturday Cormier is looking to drive their other car equipped with small block power in the highly competitive field of Modified racecars at the Thunder Mountain Speedway. The team is also going to run the North Series for the Crates Sportsman of the Bob Hilbert Sportswear Short Track Super Series.

The third regular campaigner their representing (A.M.P.) was the youngster out of Pawling, N.Y. who finished the season there 10th in the final points standings. The youngster I am referring to is Ryan Macartney who drives the (24) Old Town Barns sponsored ride. Night one Macartney wheeled it home in 11th and Saturday was a night he would like to forget as he got caught up in many of the mishaps for a 24th place finish. Sunday, he rebounded for a 11th place finish again. The focus now turns to the upcoming campaign at the Afton Motorsports Park.

I also want to mention the (1x) car that was being driving by Brian Mady out of Dingmans Ferry, Pa. Mady ran the early part of last season at the Thunder Mountain Speedway and also invaded one night at (A.M.P.) and came away victorious in his own ride. Here in Florida he was driving a team car for Andrew Smith who calls his home track now Ransomville Speedway. Mady was contending late in the race Sunday for the win against Danny Johnson in the (9J) and that call had the tendencies of getting wider and eventually Mady got caught up in the late race melee that Cormier also got into.

I hope to see you folks at all the upcoming racecar shows and or at the Georgetown Speedway. Until then Race On! I can be reached for news, notes or comments at leon84@aol.com