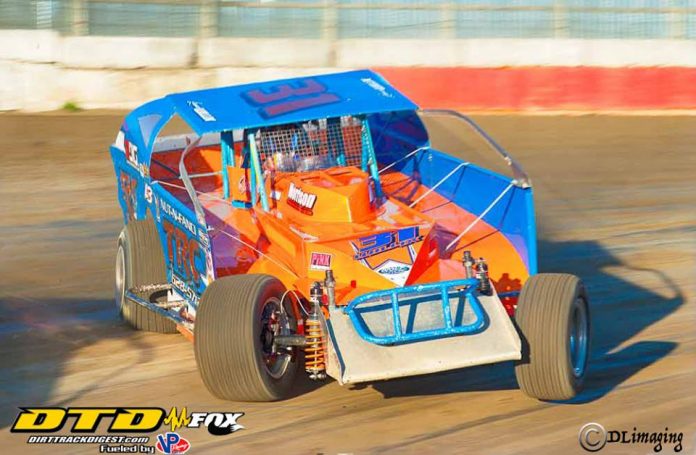 There are some teams that just keep showing their tenacity week after week and Willix Racing is one of those teams.

As the 358 Modified teams arrive at their local tracks with numerous crewmen and, in some cases, multiple cars, Lance Willix rolls into the pits with one car and one crew member, Raechelle Willix, Lance’s partner in life.

For a number of years I have watched these two dedicated racers out perform many of the big money race teams and yet, they always wear their heart on their sleeves and are thankful for what they have achieved.

By the mid-90s, Lance moved up into the Sportsman Class and in 2004, he was crowned track champion at Can-Am Speedway.

Two years later, Lance climbed up into the 358 modified class, which saw him capture the 358 Modified track championship at Can-Am Speedway in 2009.

In 2010-2011, Lance gave the Big-Block Modified class a shot but was quickly back behind the wheel of his 358 by 2012 to which he is currently still racing in this division.

For the next few years, it was difficult to commit to a weekly home track due to work commitments but the team managed to race most of the events at Cornwall and Brockville Speedways in 2015 and 2016. The team also traveled to the bigger events held in the Northeast. Lance, however, always tried to run the entire 358 Modified DIRTcar Series as it normally spread over the last few months of the season, making it easier to attend all the races due to the breaks between each event. In 2014, the team came home fifth in the series point along with a fourth place in 2016.

In 2017, Lance could only commit to running Mohawk International Raceway full-time, which in the end garnered some great results.

The August 10 race put this small team within sticking distance of the championship after having a good heat race along with a fourth-place finish in the feature, but Tim Fuller and Billy Dunn still remained ahead in points.

The final points race of the 2017 season finally came with a visit to victory lane for Lance and Raechelle as they came home with a well-deserved win. This small husband and wife team also finished off the season in third place in the point’s battle, proving that hard work can pay off in the end.

They also managed to finish third in points for the DIRTcar 358 Modified series, which wrapped up a few weeks later at the Brockville Speedway’s Fall Nationals.

The 2018 season unfolded in much the same fashion as the previous year, with Mohawk Speedway being once again their home track.

Consistency proved positive again as Lance and Raechelle managed eight top-five finishes over the season. In the end, this Theresa, NY, based team came home second in the championship. These were outstanding results if you consider that this small family-based team is on a limited budget — yet they outperform many larger teams.

For this coming season, things are shaping up to be very busy as Lance has indicated that he will be racing three tracks in 2019.

Mohawk, Airborne and Utica Rome Speedways are all on the table for Lance and Raechelle this season. I asked Lance what his expectations are for this coming year of racing;

“I won’t be consistent every night wherever we’re racing and the points will take care of themselves. Our home track will depend on points position at the end of the year,” Lance explained.

I then asked Raechelle what she thought about racing, as this may be one of the busiest seasons in a number of years for this small team.

“I thoroughly enjoy the races from being in the pits to helping my husband and being in the stands as just a fan, watching Lance succeed and knowing how we are such a good little team with very little help and financial support is very rewarding for me personally.”

Yes, this is one of those little teams that can go up against the mega teams and succeed. From that first win in the sportsman class with Lance, his Dad alongside helping, to the family duo of today, Lance and Raechelle both love racing and will surely build on their past success as we move into 2019.