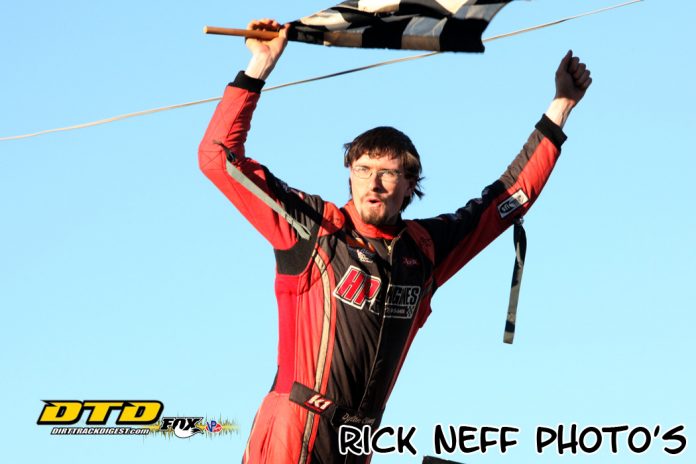 During the off-season Dylan Cisney was able to secure new sponsorship from Valley Supply Company which was going to afford him the opportunity to become more than a one night of week racer. Prior to Saturday’s opener at Port Royal Speedway, Cisney had already competed at Lincoln Speedway as well as at Williams Grove Speedway.

The extra opportunities to race is already paying dividends. Cisney didn’t have to shake the rust off on opening day at Port Royal like year’s past, this time he was on his game. He drove a spectacular race coming from eighth on his way to winning his first opening day main-event.

“It’s huge,” he said when asked about the importance of racing more. “The first night or so back is just getting your rhythm back, reflexes and reaction time after not doing it for a couple months. To have all that taken care of and get two nights of racing in, we were on a heavy track and a slick track already. Usually I’m the one coming here and working it out the first couple weeks. Racing more is what it takes. The guys that are really good at this deal, that is what they do. That is what it is going to take.”

With sunny skies and a strong wind blowing, the surface was slick from the get go. That is the kind of track Cisney likes. It’s a technical kind of a race track. It’s not a hammer down track, but one that took more finesse.

“That is just what I love,” stated Cisney. “You have to think and be patient. You have to put the car in the right spots. That’s what worked in our favor today. I kept the tires underneath me the whole time. It just worked out.”

Cisney got the win in spectacular fashion. He moved into the second spot by the midway point of the race before spending the next 12 laps tracking down race leader Anthony Macri. At times it didn’t look like he was going to get there.

“I thought I was going to run him down about halfway,” said Cisney. “When I got to second I felt pretty good. I could catch him in lapped traffic, but I just couldn’t quite get the car in the right spot to get a run on him anywhere. Once we got to clean air he was pretty good and I couldn’t make much happen. I would gain on him a little then lose a little to him. I was just praying for lapped cars for a lap or two. I was getting some good runs through the middle of turns one and two.”

As he tried to chase down Macri, Cisney used every line on the speedway with his No. 5 X-1 Racecar. He wanted to make sure he wasn’t missing the right line on the race track.

“I was just trying to move around,” stated Cisney. “You got to keep in mind if the track is going to take rubber on a surface like that. I tried running up to the top to keep my momentum up so I didn’t slide the backend, but then I’d drop down every couple laps to make sure it wasn’t taking any rubber. It was really pretty nice everywhere. I was trying to go where he wasn’t to keep some air on wing and keep the car digging. We had just enough time to make it work.

Lapped traffic became a factor in the closing laps. Macri got slowed up just enough affording Cisney and opportunity to close in. He got a great run off of turn two. He closed to within striking distance heading into the third turn. He elected to go the top as Macri dove low. That was the difference maker.

“I just went for it the last lap,” cited Cisney. “I knew I had to get a run off of turn two to get close enough to get him in turns three and four. If he went up to the top I wouldn’t have got him on the bottom. Everything had to work out and it did.”