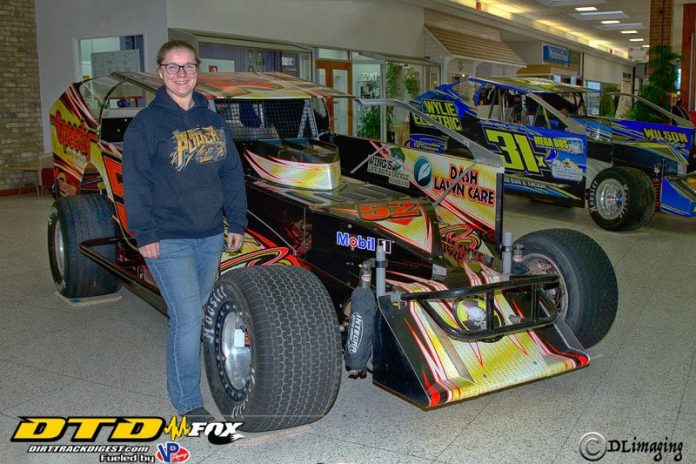 It was ten years ago when I first met Jessica Power. Over the years I have watched her grow into one of the top Sportsman Modified drivers in the Northeast. Jessica, who started out in the four-cylinder class back in 2003 at Brighton and Brockville Speedways, quickly progressed to the Sportsman Modified at their local track of Brockville Speedway. A few years later, the Power Race Team migrated to Can-Am, Cornwall and Weedsport Speedways along with one of the toughest tracks in the North East, Fulton Speedway where on any given Saturday night, there could be 50 or more Sportsman Modifieds in the pits.

This need to push the envelope was one of the reasons the team began racing Fulton Speedway on a weekly basis. As you could imagine going up against a large field of drivers every week is definitely challenging driving skills and car set-up.

Jessica said, “It is always a challenge racing Fulton and that is the reason we do it! We want to get better and racing against the best in the Northeast makes us up our game every week.”


This season Jessica will once again be racing weekly at Can-Am Speedway on Fridays and Fulton Speedway on Saturdays.

“We will also be racing Weedsport on Sundays but less than last season due to the track slimming down their program,” she said.

The season will kick off for the Power Race Team at the Can-Am Speedway on Saturday, April 13, as the Sportsman class will be the secondary show for the Super DIRTcar series which rolls into Can-Am for the first time in a number of years. Two weeks later will be the first of the DIRTcar Sportsman series race on Friday, April 26, at the Fulton High Bank Holdup weekend followed by the first Sportsman Points race of the regular season at Fulton the following night, Saturday, April 27.

The team will then settle in for the weekly regular points races at their regular tracks, running up to Labor Day weekend. The team will also race some special shows sprinkled in through the season along with the DIRTcar Sportsman series races.

With the season about to get underway, which once again is looking to be a very busy season of racing, I asked the Teams crew chief Shawn Hartin what the biggest challenges face them this year.

“The biggest thing I see is the challenge for sponsorship money, which is always difficult in this day and age. We do a lot with what we have but I think with the right funds we could be even a better team. Overall though we have a great team and great friends on the team, it’s really more like a family.”

For 2019, the Power Racing Team is pleased to announce the Mobile 1 oil will be one of their sponsors along with Intergrow Greenhouses Inc. The long-time sponsor Wings Live Bait & Tackle, Speed Auto Service, Dash Lawn Care, Action Car, and Truck Accessories and All-Star Construction are back once again with the Power Race Team.

“Without our sponsors, there is no way we could race the program that we do, and are lucky to have such a supportive group of sponsors for our heavy schedule of racing this season.”

In just a matter of days, Jessica will be turning her first laps in competition and is in good shape to put in some good performances over the 2019 season with a well-prepared team.