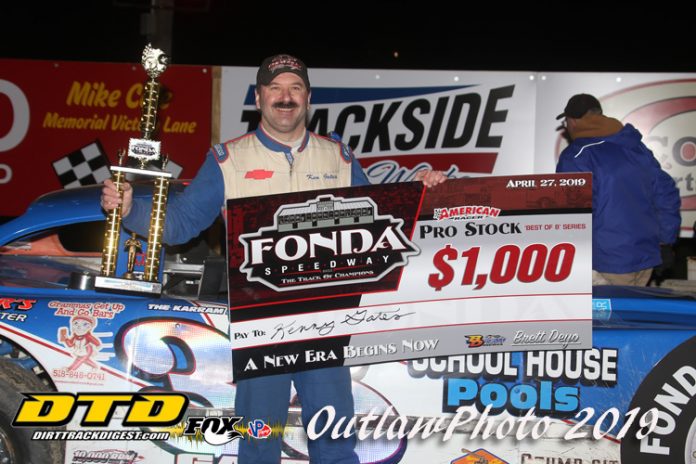 After closing out the 2018 season with an unprecedented seventh title in the pro-stock division at the famed Fonda Speedway, veteran campaigner Kenny Gates quickly picked up right where he left off with an opening night victory in the 20-lap feature event to kick-off his 2019 campaign.

Gates, who was fastest in practice two weekends prior at the Montgomery County Fairgrounds, won his heat race handily earlier in the night and by luck of the draw, found himself starting from inside of the front row for the main event. He made full use of his good fortune as the West Winfield, N.Y. pilot cruised to his first victory of the year and his 81st overall at the ‘Track of Champions.’

“We really picked up right where we left off,” stated an elated Gates on Saturday night. “Which is really amazing on a night like tonight. I drove through sleet, rain and snow to get to the track and there wasn’t any way that I thought they’d get it in and if they did, I thought the track was going to be horrendous.”


With all of the precipitation that has hit the Mohawk Valley region in the past week, many competitors were expecting nothing short of a quagmire on Saturday evening. For the most part, those very same competitors were pleasantly surprised.

“The track was beautiful and fast,” Gates continued. “I was only two-thousandths off of my track record in the heat race. I wasn’t expecting that nice of a surface on opening night; I was impressed.”

It’s fairly well-known that Gates has an affinity for Hoosier racing tires and given the promotional change from last season to this that brought the American Racer brand back for all divisions at the Fonda oval, some wondered how this would affect the wily veteran. It’s relatively safe to assume that those questions – at least for one week – have been answered in full.

“The one advantage I have is that we have done this before,” he explained. “We switched over in 2005 and I struggled but I also remembered it very well and we had notes that covered what we had to do to the car to make me comfortable and some of it was mental too. I came into tonight knowing how they were going to feel and what we needed to do and it all worked out.”

No victory is easy by any means and they’re certainly not guaranteed even if you start up front. In fact – more often than not – most drivers will tell you that there’s an added level of pressure starting on the front row for the simple reason that there’s only one direction you can go; backwards. Yet for Gates, there were no challengers during his opening night rout even though he expected there to be.

“I absolutely expected to be challenged tonight,” stated Gates. “Like I said, last time we went to American Racer’s, we struggled a bit. I thought I might struggle again and those guys would be getting underneath me and going around me so I was running as hard as I could to try to make sure I could keep them back there.”

When driver’s get out in front of the field, the difficulty of maintaining their position isn’t just limited to physical exertion; the mental segment of the sport can be just as demanding if not more so.

“You get out front and sometimes you can feel them coming or sense that they’re there when they’re not,” Gates commented. “It’s a mind game sometimes. You don’t know whether you have the field covered or not when you’re in the car so you just focus on hitting your marks and being perfect. The last thing you want to do is lose a race from the pole; it’s like giving a win away and the people around me, my crew, they work too hard and I don’t want to let them down.”

Where some would think that winning must get old – especially after 81 career victories – Kenny Gates has proven time and time again that it does not. For a driver that started his career with the goal of winning just one race, the novelty of heading to victory lane certainly doesn’t wear with time especially with only a few more seasons left before the driver of the famed No. 35 heads into retirement.

“Winning never gets old,” concluded Gates. “It’s just like the first time all over again because you never know; victory no. 81 might be the last one. You have to work hard for every single one of these wins and I really do appreciate being able to get there. I just ever wanted to win one and it was hard to do that; winning isn’t easy by any means especially racing against guys like Nick [Stone] and Chucky [Dumbleweski]. You need to bring you’re A-game and we did that tonight.”