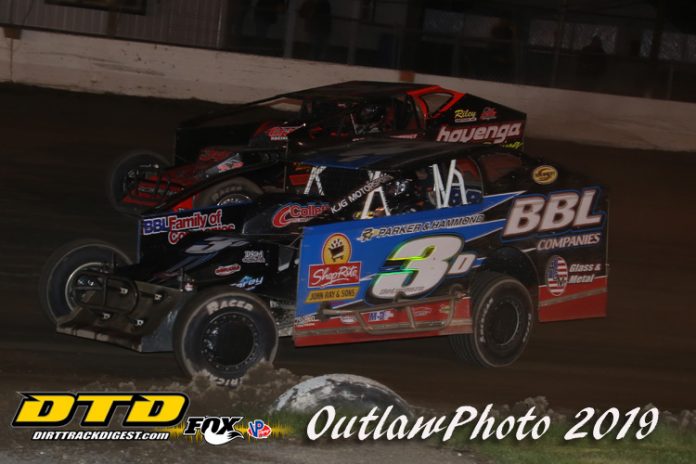 Mother Nature did her best to keep it from happening, but Fonda Speedway was able to get the 2019 underway on Saturday night. Conditions for the evening’s racing action were less than ideal with wind gusts into the 40 mph range while temperatures hovered in the mid-30s. There was also periods of very light rain, snow and sleet at various points throughout the day. Through it all, Fonda Speedway persevered and got the show in.

It was Matt Sheppard taking the $8,000 top prize in the Modified ranks with Stewart Friesen forced to take second. The next guy in line was former Fonda Speedway promoter Matt DeLorenzo. DeLorenzo was pleased with the effort on the night as it was his first race of the season.

“Those two guys are fast,” mentioned DeLorenzo. “When they got in traffic I could hang with them a little bit, but I was too tight. I can’t complain. It was better than last time I ran for sure.”

He started on the pole and led the early portions of the 30-lap feature before surrendering the lead to Friesen. He just wasn’t as good as the top two.

Dave Constantino made his first start behind the wheel of the Hoyenga Racing No. 34 on Saturday. The Amsterdam, N.Y., driver hung right with the big dogs for much of the race even threatening for the lead at one point. When the final checkered flag fell the 38-year-old finished in fifth.

“It was a great night,” cited Constantino. “Honestly I was just hoping to qualify. To go across the scales is a good night. This is my first time back in a Modified in a long time.”

It’s been over five years since Constantino had the opportunity to compete in the Modified division. His last effort in the top division wasn’t nearly as good as his current opportunity that he called “the best equipment he’s ever had.”

He had one major hiccup in the feature as he was attempting to make-up ground on DeLorenzo. He went for the pass and that nearly ended his night.

“I should have put a new tire on the right rear,” commented Constantino. “On that last restart with Matty D I sailed it and threw a Hail Mary and I almost spun out in front of the field.

Ryan Watt got his first taste of action on Saturday at the Fonda Speedway. The defending Short Track Super Series South region champion is usually successful on big tracks and he took quickly to Fonda. Although he admitted turns three and four was a unique challenge.

“It was pretty neat,” Watt said. “It’s definitely different going into three and four carrying the speed through there. I had to figure that out. It wasn’t bad. With the way weather was it wasn’t bad at all.”

Watt learned a lot on the night which he’ll use later in the season for multiple higher paying shows. On this night he ended up finishing in eighth.

“We learned some stuff,” stated Watt. “I don’t know if the big-block is the answer or a good open small-block with the weight break. I definitely learned some stuff. I don’t think we were too far off. It wasn’t bad for our first time.”

Thirty cars filled the pits in the Modified ranks. Heat race wins went to Rocky Warner, Friesen and DeLorenzo while all cars started the feature…

Front-end failures were an issue all night long as guys were clipping yuke tires on the bottom of the speedway. Mike Maresca, Josh Hohenforst and Billy Pauch all had issues in the feature that brought out yellows and forced them to be towed pit-side with broken front-ends…

Jessica Friesen took a hard lick in the main-event. She got into the wall in turn one and her No. 1z had to be cradled to the pit area. Luckily she walked away…

With all the wet weather there was a ring of water around the inside of the speedway.  That caused issues as drivers continued to work the inner-lane on the speedway causing water to splash up on the racing surface.