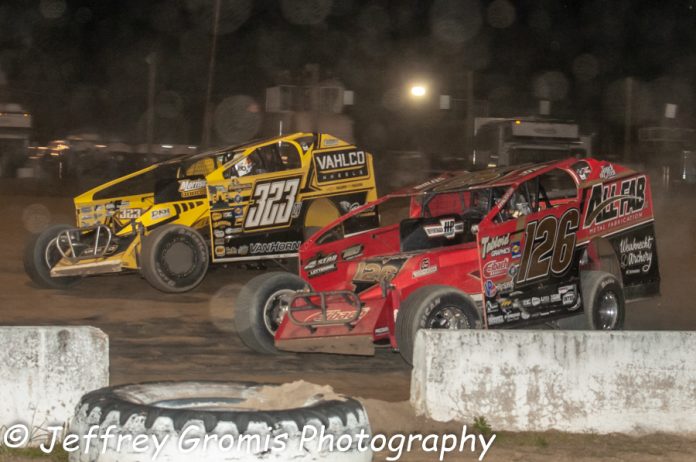 As great as a start it has been for Matt Sheppard, the complete opposite can be said for the way 2019 has been going so far for Jeff Strunk, driver of the Glenn Hyneman No. 126. The first two races of the STSS South region produced a sixth at Georgetown in a backup car and then a 14th at Port Royal. Strunk has also struggled to get things rolling at his hometrack of Grandview and at other special show.

Tuesday night at Delaware Strunk ran a great race, especially after the halfway mark to work his way up to a runner-up finish after 50 laps. Strunk moved past arch rival Craig Von Dohren with only a few laps remaining and was able to keep Sheppard honest.  He just didn’t have enough to challenge for the lead. It was a finish the team really needed to kick start their season.

“Yeah, we finally had a good run tonight,” a relieved Strunk explained after the race. “We finally got the bugs worked out of this motor and we were really competitive tonight. To come from where we started to get second tonight was a good run and a run that this team really needed. We started out a little tight early in the race, but I finally figured out a line that worked for us and we were able to pass some cars. The track was tricky tonight for everybody, but we found a line that worked to get us to the front. This second finish place against a very good field of cars will definitely give us some confidence as a team.

The car Strunk drove at Delaware has had nothing but motor troubles since Georgetown and the driver out of Bechtelsville, Pa., was quite happy that those engines problems are behind them as he looks forward to the next race.

“We’ve had some engine issues with this motor so far this year,” mentioned Strunk.   “We finally got it straightened out tonight and it showed in the feature.  Now we know what we have to work with, and we can focus on everything else instead of working the bugs out of the engine. It’s a brand-new piece.  We are really happy with it now that we have it the way we want it I can’t wait to drive it again. We knew it was a good motor that was built by Haffentreger and Ray Carroll with input from Ron Shaver.”

Starting on the pole for the 50-lap “Diamond State 50”, Craig Von Dohren blasted out to the lead and quickly put some distance between himself and the rest of the field. Von Dohren, who is still looking for his first win on the Short Track Super Series, was fast and it looked like he would finally accomplish that feat on the night. But as we all know Matt Sheppard had other ideas and after a hard battle was able to work his way past Von Dohren to take the win. Disappointed with not getting the win, Von Dohren was okay with the final result.

“We were okay tonight, but not quite good enough to win,” explained Von Dohren. “We’ll take it, learn from it and move forward. It was a good points night for us for the series. I thought we might be able to hold him (Sheppard) but the track started to go away from us, and he is usually better at the end and he was again tonight. We run good down here but it’s hard anymore to decide what car to bring to each track. Do you bring a bar car, coil car, left side panhard bar car or a standard car? Tonight, the track was probably a little too rough for a coil car, but we’ll take it.”

Ryan Watt has had a lot of success at the Delaware International Speedway in recent years but on this night the Boyertown, Pa., driver could only muster up a fourth-place finish on a tough race track.

“The track was tough tonight, but it was like that for everybody, except Sheppard,” joked Watt afterwards. “It was weird tonight.  There were slick spots, bitey spots and rough spots. Not that it was terribly rough but you get in the corner one lap and you don’t want to slide the car to keep the tires under you and then you hit one of those little bumps in the track and then it throws the nose of the car. It was a handful that’s for sure. Everybody was fighting trying to figure out where the hell to go. As the track dried out a little, we were able to use the top more and make some passes, but it was definitely a handful tonight to get a hold of.”

Mike Gular has not had a good run on the STSS South region since as he put it, never. Gular has had a lot of success on the North region but for some reason he just couldn’t catch a break on the southern tour. Finally the team was able to put a good quality run together and come out at night’s end with a solid fifth-place finish.

“I think that was our first top five in the South series to be honest with you,” said a happy Gular.  “A little attrition helped tonight, but we were pretty good there at the end. We struggled early in the race with the car being very tight.  As the track dried out a little we were able to find a good line down low and work our way to the front. I thought I had Watty (Ryan Watt) there for fourth but I screwed up and he got back by me. We had a good battle going there between us.  It’s fun to race against him.  He’s a good clean racer.”

Thirty-five cars signed in for the night’s action with Stewart Friesen, Ryan Watt, Anthony Perrego and Tyler Dippel winning the heats. The consi was won by Jojo Watson. Provisionals were awarded to Mike Mahaney, Keven Sockriter and Roger Manning…

New Jersey drivers Billy Pauch Jr., and Danny Bouc both saw their night’s go bad in the feature after solid qualifying efforts with each of them earning redraw spots. Both Pauch and Bouc made multiple pit stops in the main-event before electing to call it a night resulting in DNF’s for both…

Rick Laubach had the Gary Hermann No. 7 was in a solid top five spot for most of the feature before having engine troubles and pulling off…

With only one big-block car available at the current time, Ryan Godown decided to skip Delaware with the SDS race at Outlaw Speedway coming up this Tuesday…

The next race on the schedule for the STSS South region will be on Thursday night May 23rd when the series makes its return to New Egypt Speedway after a two-year absence. Billy Pauch Jr won the last time the series visited the central NJ track in 2016…

As always, I can be reached at dirtracefan25@hotmail.com or on Twitter @dirtracefan25 for any questions or comments