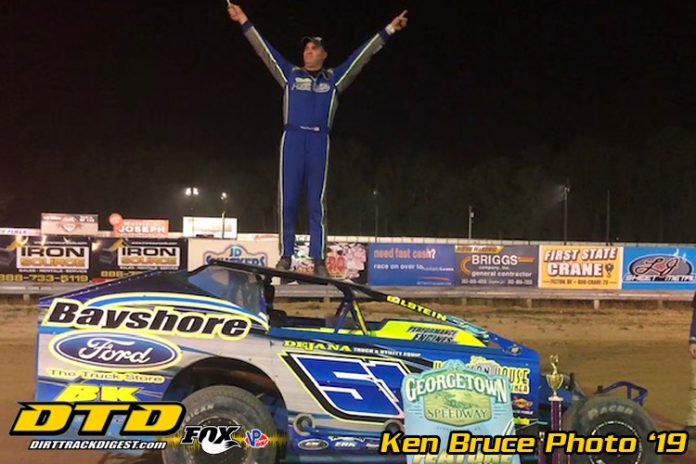 It really shouldn’t come as a surprise to see Richie Pratt Jr., in victory lane.  The driver out of South Jersey has won many feature events in his career. But the victories have come few and far in between the past few years as Pratt has struggled to even put cars on the track due to finances. Pratt and his father have worked very hard to keep Richie on the track and late last year Pratt received the break he was looking for.

Late last season, Modified car owner Daniel Sommeling was looking for a new driver after his driver at the time Billy Pauch Jr., and himself decided to mutually part ways. Looking for a driver that could commit to working on the cars regularly, Pratt was the perfect fit. Living in close proximity to the shop where the No. 51 cars are maintained, Pratt jumped at the chance to drive for Sommeling.

The team showed some promise as the 2018 season came to a close and came into the 2019 season with much anticipation and hope. So far in 2019 the team has struggled to get things going, but on a beautiful Friday night in Delaware the team finally put it all together at the Georgetown Speedway to win their first race of the season before the capacity crowd on hand.

“I really need to thank Danny (car owner Dan Sommeling) for this opportunity,” said a jubilant Pratt after his big win. This ones for the crew, they work so hard.  We’ve been struggling and haven’t got off to the start that we were hoping for with this new deal. Winning tonight really show’s what we are capable of going forward.”

By the luck of of the draw, Pratt started from the pole position ironically alongside the cars former driver Billy Pauch Jr. Pratt was able to out gun Pauch at the drop of the green flag and immediately take command of the race. Pauch hung tight and looked to be able to run down Pratt as the laps started to tick off. Unfortunately for Pauch, he needed long green flag runs to get his momentum going in his Rick Holsten No. 96 and he just wasn’t able to do that as the race was plagued by yellows early on.

Each and every restart, Pratt was up to the challenge as he took off from the inside and was able to maintain his lead as the drivers battled behind him. Montgomery, N.Y., driver Anthony Perrego was on the move early on and was the next driver to challenge Pratt as he moved past Pauch Jr., into second.

Perrego tried everything in his repertoire to try and get past Pratt but but to no avail on this night.  Pratt held off his advances to secure his first win on 2019 along with the first win together as driver of the the No. 51.

“The car just drove really good all night,” explained Pratt.  “Starting up front certainly helps, but I think we had a car capable of winning tonight either way.  I almost messed up bad getting into turn three there at the end. A lapped car was blocking my view to where I wanted to get into the turn and I had to cut down low.  Then let the car swing out and I was just waiting for someone to go by me, but we hung on.  It’s nice to be in victory lane with these guys. To hold off Anthony Perrego, who is one of the best in the business, is a great thing.”

Anthony Perrego made the long haul down from NY to strap himself into the Gary Simpson owned No. 12 Teo Pro Car Modified searching for his second win of the season for the newly formed team. Perrego gave it all he could but just could not find his way by Pratt to get the win having to settle for finishing in the Runner-up spot.

“With us starting ninth and him starting on the pole, it took us about half the race to get into second,” mentioned Perrego. “We had a really good car, but everyone was fighting for the outside there at the end when it was kind of single-file. I tried the bottom early on there wasn’t really anything there. I really can’t complain about second, but we would’ve liked to win.”

I asked Perrego that now that he had has some time to think about it if there is anything else he could have tried to get past the leader.

“I don’t know, he was holding his line good there every lap,” explained Perrego. “I think maybe if there was another yellow I and if had choose the bottom again I might’ve been able to beat him into turn one. He choose the bottom every time against Billy (Pauch Jr.), but I think Billy was running a small-block and that was hurting him on the starts.”

Ryan Watt is no stranger to trying different ideas with the setup of his race car. In fact, it was the success of Watt that was the catalyst behind the new rear coil over setups that a lot of teams have experimented with over the past couple of years.

At Georgetown Speedway the team had a combination setup going with a standard torsion bar in the left rear to go with a coil over setup on the right rear. Watt was fast and managed to click off a third-place finish on a track that the top was definitely the fastest way around on this night.

“We’re just trying some different things there and experimenting a little,” explained Watt. “It wasn’t terrible.  We just wanted to try some stuff we’ve been kicking around to get ready for New Egypt on Thursday to maybe find something that will be a little more drivable. It’s definitely easier to drive than the other coil over set-up I normally run so we’ll see what happens.”

There were 32 Modifieds on hand for the night’s action with Craig Von Dohren, Anthony Perrego and Richie Pratt Jr winning the heats…

Tammy Rust, widow of the late Deron Rust, gave a very heartfelt speech at the drivers meeting regarding her late husbands love of racing and what it meant to him. To say it was an emotional moment is an understatement…

Kudos to Brett and Heather Deyo and their staff for putting on a great show along with getting everything completed at a decent hour. While most of us were still sleeping in the morning after getting home late, the Deyo’s were on their way north to Fonda Speedway to get things ready for Saturday night. It is a schedule that this writer would have a hard time keeping up with for sure…

The turnout of race cars in all divisions is a testament to how much the Deyo’s have done for racing in Delaware. Add to that the very large crowd that was on hand all leading to a very successful night of racing in the first state…

Jimmy Horton had a good run going in the top 10 when Jojo Watson slid sideways in turn three and slowed down dramatically. Horton, with nowhere to go, ran into the side of Watson’s No. 30 causing himself to spin. After making a pit stop and returning, Horton pulled out a lap later with apparent front-end damage…

Jeff Strunk was a rocket early in the feature event moving the Glenn Hyneman No. 126 from his 14th starting spot up to the top five early on.  It looked like he was going contend for the win. Unfortunately Strunk faded a little at the end but still hung on for a very credible seventh place finish…

One driver to keep an eye on going forward is young Ryan Krachun in his family owned No. 29. Krachun has started to get himself acclimated to running a big block and just seems to get better and better each time he climbs behind the wheel of his TEO Pro Car Modified…