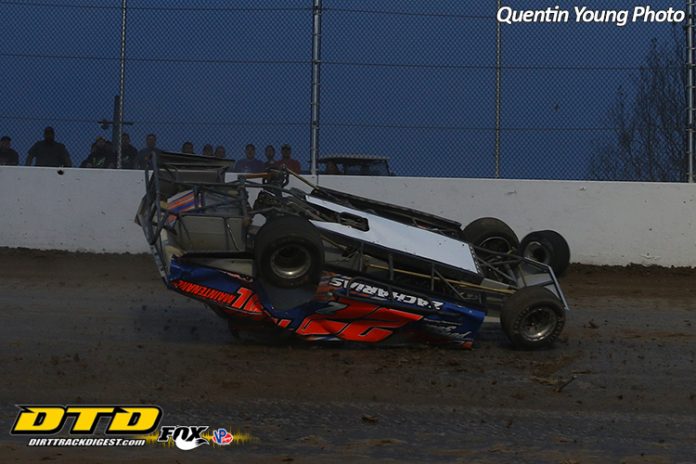 Sportsman driver Dylan Zacharias was apparently en-route to a spot in the Weedsport Speedway Sportsman main-event on Memorial Day as he was leading the qualifying heat race in the closing stages.

However, entering the third turn suddenly there was a loud bang and the right rear tire departed from the car. The end result was a quick and hard snap roll leaving the 27z on its side directly in front of the pit grandstand.

Dylan was assisted from the car and was delivered by ambulance to his pit stall.

Talking with DTD afterwards Dyan was hurting and pretty depressed.

He said, “This was Rich Scagliotta’s old car and maybe had three races on it. We bought it and spent all winter working on it. It is a great car and we’ve been having a great season with it. Overall it probably had eight races on it, but now it’s junk. We won one feature with it (at Fulton) and we haven’t been outside the top ten.”

Dylan noted, “My head and back are pretty sore right now, but I’m okay.”

What happened isn’t exactly known as Dylan said, “I think the hub broke. On the restart at the green Matt Matt Guererri and I hit and I thought the tire might be going flat. There wasn’t much further to go and I thought I could hang on. There was a vibration, but I really thought it was just the tire. Suddenly things happened. What happened I don’t really know.”

There was extensive damage to the 27z as the rear frame bent due to the force of the flip and resulting hit.

Troyer’s Billy Colton and Peter Britten were on hand in the Zacharias pit examining the mangled vehicle.

Zacharias said, “I think Billy will give me a good deal on a car, but we will need to come up with the money.”

The team has two cars and they have been renting their other to Chris Bonoffski. There is a possibility that Chris might be looking for a ride.