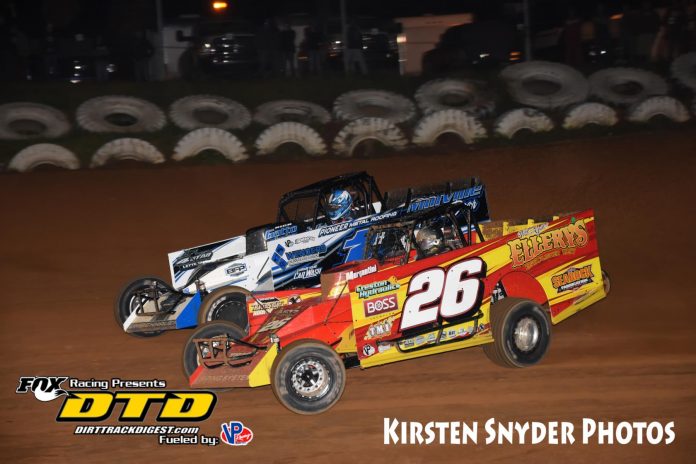 Last Friday’s “Topless” 40-lap feature at Big Diamond Speedway was a race that Ryan Godown had circled on his calendar since it was first posted on the speedway’s 2019 schedule. Godown thought he had the inaugural race won last year until Craig Von Dohren snuck by him on a late race restart to steal the win. It was a disappointing race for Godown last season and one he hasn’t forgotten.

Friday night at Big Diamond, Godown got his revenge as he was the one who tracked down Von Dohren, who had led from lap one, to get by and take the big $5,000 victory in convincing fashion.

Godown, who hails from the small town of Ringoes, New Jersey which is about a dozen miles south of the old Flemington Speedway, has always had fast cars with himself and brother Butch turning the wrenches in the set-up department but it is his friendship with a former driver who resides north of the border that is helping the team fine tune their set-ups week to week.


Enter Stephane Lafrance, a former driver and owner of Trick Race Parts out of Canada. LaFrance has been an influence on Godown for a few years but recently has taken on a bigger role with the team in 2019. When Godown, along with Steve Searock, made the decision to run the complete Super DIRTcar Series this season having Lafrance along as their crew chief on the touring series was a must. With Lafrance working with the Godown the past couple of seasons at Super DIRT Week and at Eastern States Weekend, the team has shown speed and if not for a blown engine with two to go at last year’s 200-lap Super DIRT Week finale at Oswego, Godown would have easily finished in the top three. The team also time trialed in the top six for the Eastern States 200 last season and was fast the whole race until a late race tangle put him out.

Even with Lafrance not being with Godown when he races at his local tracks of Big Diamond and New Egypt, he is always just a phone call away whenever the team feels they need some help with the night’s set-up on their Troyer chassied Modifieds. Godown also is in communication with Lafrance during the week as they discuss what direction to go in setting up the cars for the weekend’s action.

“We’ve been running some of this new suspension stuff with our small-block and we’ve been gaining on it and gaining on it but there’s always thing I want to try but I am afraid to go too far,” explained Godown relaxing at his hauler after the big win. “Finally, tonight I just went with my gut and it worked.  (Steve) Searock and my brother looked at me like I was nuts, but it worked. At the end of the day I couldn’t do any of this and run as good as we are without the help and guidance of Stephane Lafrance. It’s hard to explain everything Stephane has done for me and for our program to get us where we are at today.”

Working with Lafrance has helped the Searock team not only with their big-block program on the SDS but his influence and knowledge has also trickled down to keep the team going fast close to home.

“Stephane is a second to none smart guy, he’s been working with us week in and week out and is an essential part of our crew,” cited Godown. “He is the set-up guy on the big-block car, but he has also been helping us with these small-blocks as well. Listen, he tells us what to do and tells me which way to steer. He’s not the only guy that helps us but by far I wouldn’t be able to do what I am doing or run as good as I am without him. Stephane has been a big influence on me and I respect his knowledge of race cars and look forward to what the rest of the year brings.”

Ryan Krachun was a big surprise last season at Big Diamond Speedway finishing fifth in points at season’s end. The young talent out of Neshanic Station, N.J., started turning heads early last season and by end of the year had turned into a solid top five runner. The 2019 season at Big Diamond has started out slow mostly due to the many rain-outs and specials, but this past Friday Krachun came to life battling Von Dohren for the lead for many laps before eventual winner Godown snuck by relegating Krachun to a solid third place finish.

“We had a pretty fast car tonight, I don’t think we had quite enough for Godown or Von Dohren but we were right there,” said a happy Krachun talked about his night. “I’ve been racing these guys for awhile and tonight we had our best finish so far, but we still need to get a little bit better so we can finish two spots higher and get a win here. I could get under Craig but just not quite enough to get by him and then I made a mistake and tried to go a little higher but ended up drifting up too much and Godown was able to get by me. Either way I think Ryan was going to get by both of us, he was that good tonight. I’m happy he won but I sure wish it could’ve been me instead.”