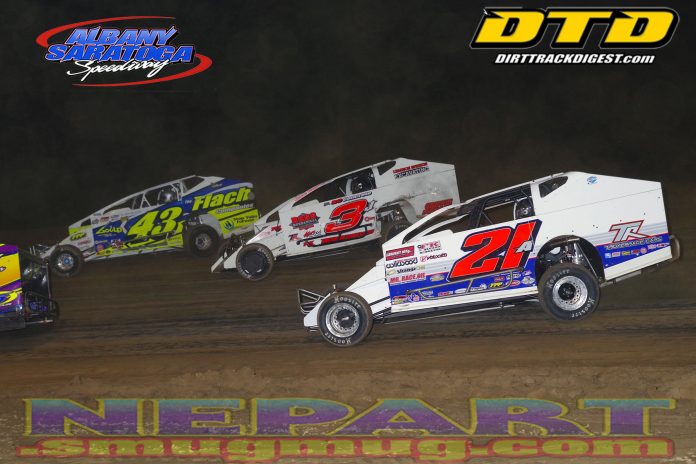 MALTA, NY – Racing is nothing short of a high-octane, adrenaline fueled emotional rollercoaster.

Then there are nights that Australian import Peter Britten got to experience first-hand at the Albany-Saratoga Speedway in Malta, N.Y., where both categories occur on the same evening at almost the same exact time.

What started off as Murphy’s Law quickly combined with Yhprum’s Law and that equated to the ride of a lifetime for the driver of the No. 21A Troyer chassis.


Britten’s night started off well with a fourth-place finish in his heat race that ended with him easily placed into a handicapped position for the 35-lap modified feature later in the evening. With a stout machine under him and a tenth-place starting position on the grid to look forward to, the evening appeared to be a promising one.

Then came the pre-feature hot-lap session.

When Britten hit the speedway surface all was normal. After the green flag flew the 2017 Modified track champion at the Saratoga county facility fired and reached race pace quickly. Until he reached turn four and then there was nothing. Absolute, dreadful silence.

“I don’t even know how it happened,” Britten said after the feature event Friday night. “We were fueling up the car for the feature and one of the fuel jugs had water in it. Not a small amount of water either; I mean a lot of water. Half of it was water and there was dirt in there; I don’t even understand how we could have a jug like that.”

After quickly diagnosing the issue, Britten and his crew went to work with the short amount of time they had to remedy the problem. Fuel lines were cracked, body panels removed, the floor was tossed aside and gallons upon gallons of diluted, watered-down fuel were drained. It was a stress-test of horsepower proportions.

“We actually ran out of fuel,” Britten continued. “We drained and flushed so much that we had none left to refill the car but thankfully, the Flach team [Keith Flach] lent us some of theirs so we could make the feature.”

At the drop of the green flag, Britten took off like a rocket. Granted that analogy has been overused throughout the entire history of motorsports in the world to the point of nausea, yet on this rare occasion, the statement fits perfectly. If ever there was a fitting time to use this statement accurately, Friday night was it.

By the end of the second circuit, Britten was fifth. By the end of the third circuit, he was fourth. Had there been any bets placed in Vegas, the odds of him snagging his third victory of 2019 were stacked fairly well in his favor. Until lap-12.

“The cautions just didn’t go our way tonight,” Britten said. “I’d pass someone, the caution would come out and they’d be back in front of me. I’d need to be on the top and I’d be on the bottom. It was just tough and I should have gotten to the front but that just wasn’t our luck tonight.”

Though the cautions made it difficult for certain, what happened next was another moment that could be considered a venerable Murphy-ism and a guaranteed cover shot for 4 Wheel & Off-Road Magazine.

“He [Johnson] always runs such a different line in turn one,” stated Britten. “He goes from way up top to straight back down to the bottom. I don’t even know how he can get the car down from where he starts off in the corner. Because he does that, he’s really slow on corner entry.”

Not wanting to be responsible for keeping a fellow-competitor out of victory lane by means other than making a clean pass, Britten had to check-up more so than he was anticipating. Another layer of fortuitous insanity was about to be added to his evening.

“In hindsight I should have known he was going to do that,” Britten explained. “I should have tried to slow up a little bit more a little bit earlier than I did but I didn’t want to be the guy that takes him out so I slowed up a lot so I could miss him and I just tapped him with my right front and I was already about turned around and that was just enough to send me to the infield.”

And through the infield he went, dodging one implement tire and splitting the difference between another and a light pole all the while with his foot on the gas and off-roading through the infield, down the backstretch and back onto the speedway surface just ahead of the entrance into turn-three. To hell with the road to Grandma’s house; this was a far more scenic route than any ‘over-the-river’ and ‘through-the-woods’ could ever hope to be.

When the dust settled – and the collective gasps of the crowd silenced – Britten had only lost four positions. The rollercoaster ride continued in earnest.

“From there it was just a dogfight,” he said. “Whenever you get a track that has that roughness to it that’s slick, it just makes the cars hard to handle and it’s hard to find a consistent line and you’re trying to work for every spot. It’s tough but we ended up third so I guess we’ll take that.”

And a dogfight it was as Britten charged back through the latter half of the top-five to make it back into the top-three all the while fighting off the challenges of Keith Flach and Matt DeLorenzo. It was a heavyweight fight that was supposed to go ten-rounds but really ended up going twenty.

“Tonight was interesting to say the least,” Britten concluded with a laugh. “We went from water in the fuel to battling for the lead to going off-roading to finishing third. I have to thank the Flach team for their help and my guys as well. Like I said, we ended up third and given what we went through, we’ll definitely take it.”