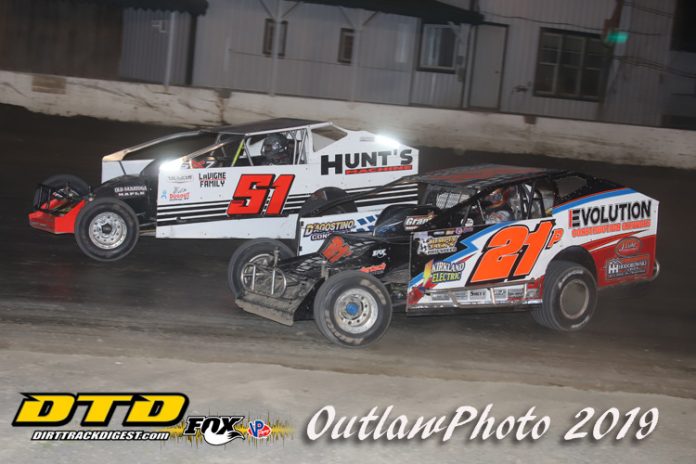 FONDA, NY – Finishing second can be a difficult pill to swallow.

Then again, there are times when finishing second can feel more like the joy of victory than the gut-wrenching agony of defeat.

Pep Corradi has had a season of highs and lows thus far in his 2019 campaign yet Saturday night at the Fonda Speedway in Fonda, NY, the driver of the No. 21P Modified made his presence felt with a much-needed and well-deserved second place finish behind Rocky Warner at the conclusion of the evenings 30-lap affair.

After assuming the lead when then race-leader Scott Huber suffered what appeared to be mechanical woes on his No. 51 on lap-9, Corradi quickly stretched out his advantage over Darwin Greene and Bobby Varin. To the Fonda faithful, it seemed as if his winless streak was finally going to come to a close.


Then the caution came out with a mere 11-laps remaining.

With Rocky Warner on his outside, Corradi knew that the defining moment of the evening was placed squarely on his shoulders. The only issue was the fact that for last night, at least, horsepower was the enemy.

“I knew that I had to have him by at least a car length heading into turn one on the restart,” Corradi stated on Saturday night. “The only problem was that I had to really peddle the bottom with my big-block and I couldn’t run the top so my choices were kind of limited and with his [Warner] small-block, I knew it was going to be tough.”

Unfortunately for Corradi, Warner proved to be too strong as he watched his chances at reaching victory lane disappear from behind the wheel of his Grant powered, Teo Pro chassis. Yet all was not lost as he not only maintained his position in the runner-up spot, he held off the challenges of both Bobby Varin and Jessica Friesen over the remaining laps at the Montgomery County oval.

“I don’t know if we would have held him [Warner] off,” continued Corradi. “When you get out there and you’re running all by yourself, you get a rhythm. He [Warner] raced me clean and I had a good race going with Bobby [Varin] and it was tough. It’s a different story when you’re racing with people rather than when you’re all by yourself.”

To say he had a good race going with seven-time Modified track champion Bobby Varin is an understatement. Over the closing laps, a venerable dogfight ensued with Varin making run-after-run at Corradi and Jessica Friesen was nipping at his heels waiting for an error; a chance to take advantage of his misfortune.

It was a chance that neither Varin or Friesen would find themselves in position to capitalize on.

“I had to slow down so much heading into the corner,” Corradi stated. “I kind of figured that they were all over me because I had to peddle the car. I didn’t want to break the tires loose so I had to be careful but to get a second tonight, I’ll take it.”

“I don’t know if it’s me and Ronnie [Johnson] in the same shop or if it’s just bad luck,” Corradi said. “But maybe it’s finally turning around. He [Johnson] won last night and now I finished second tonight. It’s been an up and down season; we weren’t good in our heat race but we were good in the feature when it mattered. Hopefully this is the start of something for us.”

One thing can be said for Pep Corradi over the entirety of his racing career; regardless of the outcome, regardless of his luck – or lack thereof as the case may be – he doesn’t quit. Perseverance and tenacity have become a mainstay in his reputation from speedway to speedway and with good reason: his personality and drive are nothing short of admirable.

“I don’t know what to tell you other than we’re just going to keep plugging away,” Corradi concluded. “I do this by myself with my wife and I lost my brother three-years-ago and tonight I felt him with me. I haven’t felt him with me since the last time I won here and I know I can win. It’s been a struggle for sure but I’m going to keep doing what I can and tonight, the result proves why. We’ll just keep doing what we can and eventually another win will come.”