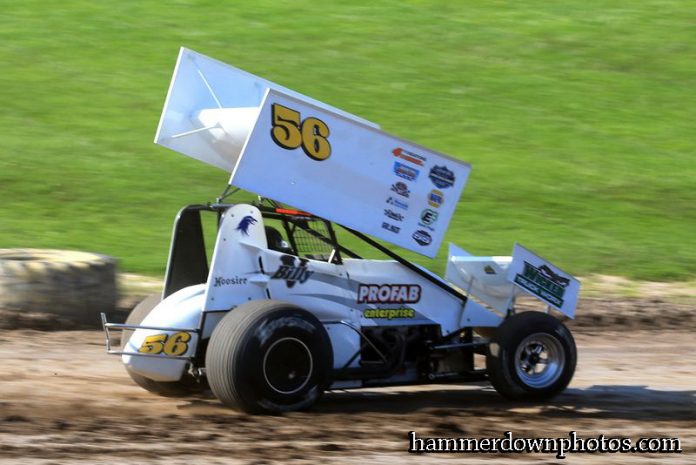 Billy VanInwegen has been quite well known for his Modified exploits, but he has also taken up another form of racing.

Before a near standing room only crowd of enthusiastic fans, Billy V captured his first 360 Sprint car feature event at Quebec’s Granby Speedway.

He said, “I’ve been running Sprints for three years, but two full seasons. I’ve have more bad luck than good, but we are learning. I was able to run the top and move around comfortably. The cushion was way up and it was working.”


Continuing he said, “The win was huge and it took a lot of weight off me. I finally got one. Last year at Fulton I got passed on the last turn of the last lap. It was disappointing.”

However, now that he has that monkey off his back he is starting to click along and confidence wise feels he can be in the midst of the competition.

The trip to Granby was a nightmare and he almost never had the opportunity to chalk up the initial Sprint victory.

Reflecting on the trek, Billy said, “We apparently had a fuel filter problem as I think we might have gotten some bad fuel. Every 20 to 30 minutes the hauler would stop. We’d panic a bit, but it reset and we got back on the road. It was a long trip, but fortunately one of the guys had brought along a sensor so we had an idea what was going on.”

This season is a bit different for the Port Jervis, N.Y. driver as this past weekend he also captured a Modified main at Orange County.

He noted, “I’ve had two wins at Orange County and I’ve run five shows there this year/. The new format and inversion really helped me the other night as I started on pole and ran away despite having brake problems.”

Over the year Billy V. has been in a share of high profile rides and currently he runs the Joe Barbagallo 4 at Orange County. He ran with a family owned team and of course the Sherlock car and Dieter Schmidt’s Small block (which he still runs).

He noted, “I ran the full Super Dirt Series at one time and finished 10th or eleventh in points. I would like to try the series again sometime. I have been able to gain some experience in the 305 Sprints that my sister Emily runs and had run for Mike VanDusen in his 305. Brad Radivoy had a 360 for his son and I teamed up with him to run the whole ESS schedule this year. Mike VanDusen is my crew chief.”

It seems Billy VanInwegen is comfortable in either a Mod or Sprint and coming off the win at Orange County he headed for the Cole Cup at Utica-Rome and finished ninth.

There is no doubt Billy has put together a formidable and competitive team and not only will he be looking for more ESS wins, but keep your eye also on the Orange County results in the weeks ahead.