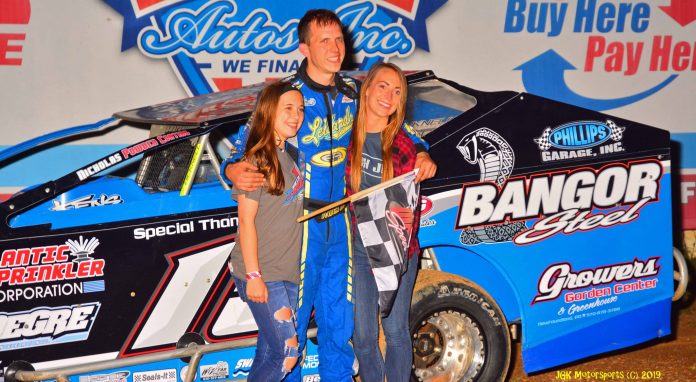 To say it’s been a struggle at Big Diamond Speedway for Billy Pauch Jr., would be an understatement. Pauch, who won the track championship at the speedway in 2015, has always been a top runner at Big Diamond but the past two years have been nothing but troubling for the Frenchtown, N.J., driver. 2018 started out on a good note when the team opened the season with a win but for Pauch that was the only time he would visit victory lane at the speedway.

The team came back for 2019 with a new Bicknell chassis and a plan they thought would put them upfront weekly, but the team still has struggled mightily throughout the early parts of the year, mostly with handling issues. The team just hasn’t been able to get power to the ground along with the feel that Pauch is looking for.

The first two points races of the season found Pauch with finishes of seventh and 17th, certainly not the way Pauch had planned on starting the season. This past Friday night was a different story as the No. 15 came to the track looking for a marked improvement and by night’s end they had accomplished what they set out to do as Pauch stood in victory lane at Big Diamond for the first time since opening night last May. For Pauch, the win Friday night was his 16th career win at Minersville, PA dirt oval.

“We finally got the job done tonight,” said a jubilant Pauch afterwards. “I know we started on the pole, but you take them any way you can. As bad as we’ve been lately, I’ll definitely take it. These guys worked hard tonight.  I know I was pretty down in the dumps for awhile because of the way we’ve been running here but tonight we finally hit on something that worked.”


The car showed speed in the heat but Pauch still was struggling trying to keep the front tires on the track. Pauch did manage to hang on and finish the heat in third which was important as it put Pauch into the redraw for the feature.

“The heat race was a struggle for sure. Man, I couldn’t keep the nose down on the track,” as Pauch explained his early night troubles. “It’s been that way for about three weeks here and honestly we went to work and probably changed about everything we could for the feature.”

As Pauch mentioned above, the team worked hard before the feature event to make the changes they thought were needed before feature time. Pauch meanwhile was able to draw the number one pill putting him on the pole for the night’s 25-lap feature. Pauch went on to lead all 25-laps but it wasn’t without challenge as Craig Von Dohren and Ryan Godown each had their turn at Pauch throughout the main-event. Pauch managed to make all the right moves and keep the two previous points race winners behind to take home the much-needed win.

“It was a battle with Craig there for a while as I really didn’t know he was that far alongside of me when I squeezed him on that one restart so I feel bad for that,” Pauch explained about his battles with two of the track’s best. “The battle with Ryan was a good one.  Ryan ran me clean every lap and I appreciate that. He could’ve dumped me, but he didn’t, and it was a good race. I was able to maintain my line each lap and I knew as long as could do that and not make any mistakes, I could probably hold on; I was really getting a good run off of turn four which allowed me to stay in front. We had to battle there on a few restarts and there were games being played which I don’t really care for, but it is what it is, and we were able to get the win.”

An addition to the team’s crew this Friday night was Phil Cox who is crew chief for Pauch’s dad, the legendary Billy “The Kid” Pauch. Cox came onboard to see if he could give the team a fresh perspective for the night.

“That was actually my Dad’s idea on Monday to have Phil come and help us out tonight,” cited Pauch. “I was kind of bummed after last week and you start to question yourself set-up wise as to what you are doing. I know I can drive but sometimes you just question your set-up thoughts. Sometimes it’s good to step back and listen to a different perspective to get these things to drive the way you want them to. I have a great group of guys who work their butt’s off every week, but we were struggling here for sure. I tell you I was ready to pull my hair out because of the way I was running here but at least tonight it all came together. Now we’ll see how we can do next week when we have to start further back.”